The Shroud of Turin is either a relic of Jesus, created from his burial shroud at the electro-magnifying moment that he rose, or it is a 12th or 13th century fiction.  Scientists agree that this length of linen has been subject to more extensive study than any other piece of cloth in history.  They disagree on their findings.  The Vatican, and most recently Pope Francis, is not troubled by the debate between non-ecclesiastics.  While neither rejecting nor certifying the Shroud of Turin as a holy relic, popes have taken on faith that it is a religious icon. 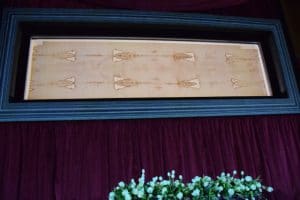 The Shroud, now laid out under bulletproof glass, in a special frame for display, first came to Turin in 1578, on a loan from its French possessors.  It was gifted to the Vatican in 1983.  In 1898, a display of the Shroud was widely publicized.  It has been the subject of veneration and scientific hypothesis ever since. (See May 6, 2015, CTH blog post on the background of the Shroud of Turin:  Most Venerated and Most Studied).

The Shroud of Turin has only been available for viewing by the public on special occasions, at the invitation of the Vatican.  Reserving a place on the floor of the viewing room for a fifteen-minute audience with history has become the hottest of free tickets.  Pope John Paul invited viewers in 1998, on the centennial of the first public Vatican-sanctioned viewing.  The millennium moment of 2000 was another viewing event.  When the Pope Benedict XVI invited visitors to see the Holy Shroud in 2010, two million people came to Turin for a viewing between April 10 and May 23.  The crowds came despite the 1988 radiocarbon analysis that dated the shroud to no earlier than 1260.  The faithful and the curious were undeterred.

Pope Francis held a televised visit with the Shroud of Turin in 2013.  He sanctioned the viewing event in May and June of 2015, to commemorate the bicentennial of the birth of St. John Bosco, the 19c Turin priest.  The visit to Turin of Pope Francis is June 21 and 22, 2015.

My time with the Shroud was on May 7, between a cruise ending in Rome on May 4, and a cruise beginning in Venice on May 9.  It is not necessary to take a position on the authenticity of the Shroud to be caught in the mystery of faith swirling in Turin over its most famous resident relic.  The souvenir booths that line the center of the pedestrian shopping street of Via Garibaldi, which emanates from the main square, do a brisk business in shroud memorabilia.

Whether the Shroud making its moving appearance in the specially arranged viewing space in the Duomo di San Giovanni Battista, in the central historic district of Turin, is believed to be a 1st century relic of the Resurrection of Christ, a faithful copy, or a later construction, the energy of the devoted, faithful, and enthusiastic visitors is compelling.  Excitement builds as the timed tickets admit visitors to line up and walk through a tented path, around an archaeological park, through the town square, and finally approach the cathedral for admittance to the Duomo, where the Shroud is housed.

When I entered the tented visitor space at 7:30 a.m. there were more guides than visitors.  We were ushered into a large tent to view a ten-minute video that explained that which we would soon see.  We were then led quietly into the church and invited to choose one of three viewing levels on which to stand.

Viewing the Shroud from a distance of about ten feet, in the darkened church, the framed and backlit cloth was a stunning sight.  The experience was surreal.  The Duomo is impressive even without the curtains and risers for the special event.  The only sound was the constant click of cameras, and the Italian nun reading a prayer.

The group of viewers was then directed out of the church at the front.  The bright light of the Turin morning and the traffic in front of the Duomo forced a sharp return to life in the present.  It was only 8:30 a.m. and the initial reason for our trip to Turin was complete.  The remainder of our two days in Turin would be devoted to the remainder of the sights that Turin has to offer.  As it turned out, there is so much in the city to draw visitors that had there been no Shroud; our brief time in the city would have been memorable and much too short. 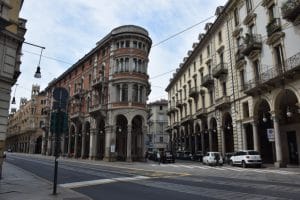 historic central district near the Palazzo Reale di Torino, the square of the Duomo

There is value in opting to stay in the historic central district near the Palazzo Reale di Torino, the square of the Duomo.  Within walking distance of the church is the main city plaza surrounded by museums, shopping arcades, lovely streets and plentiful restaurants.  As a consequence of a large shroud-driven economy, many of the restaurants offer menus in Italian and English.

Turin was a Roman outpost in the 1st century and an early city to adopt Christianity.  A bishop has had a place in Turin since the 5th century.  At the end of the 15th century the powerful Cardinal Della Rovere was able to receive sufficient donors to build the magnificent Renaissance cathedral and dedicate it to Saint John, before he became Pope Julius II.  The chapel behind the high alter, the Cappella della Santa Sindone (Chapel of the Holy Shroud), was built between 1668 and 1694, to give the Shroud a permanent home.  (Sindone is the word for shroud in the Gospel of Mark).

In the most recent two centuries Turin became a factory city, best known for the manufacture of Fiat automobiles.  Today, the factory era has been cleansed to leave a city with layers of history, covering two millennia.  Turin is a center of Renaissance, Baroque, and modern architecture.  That Turin was part of the wealthy, French Savoy Empire until the mid-19th century, is evident in this city that is as French as it is Italian.

The wide streets and elegant villas of Turin are indicative of a town that grew to its present form as a prosperous 18th century manufacturing town.  The central historic district is notable for the long, covered arcades that line the wide streets.   It is fun just to wander under the arcades and to explore the side streets to discover shops and restaurants with outdoor seating, where children play in the open plazas. 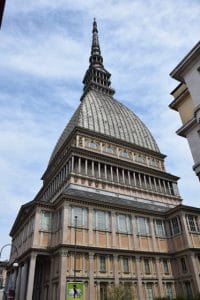 The tallest tower in town provides panoramic views of Turin.

Within a few blocks of the Porta Nuova train station there is the largest collection of Egyptian antiquities outside of Cairo, to rival the British Museum, at the Egizio Museum; the palace and now museum of Victor Emmanuelle II, the first king of the unified Italy; and the art gallery, Pinacoteca Albertina.  The tallest tower in town, and the architectural feature adopted by Turin as its terrestrial icon, is the building named after its architect, Mole Antonelliana.  Initially built as a synagogue, although never used for that purpose, the building houses the Museum of Cinema.  Another reason to venture in this museum is to take the elevator to the top of the tower, from which panoramic views of Turin are breathtaking.  Arial views of the central historic district are also possible in the tower of the former Savoy Palace, now the Museo Civico d’Arte Antica, the Palazzo Madama. 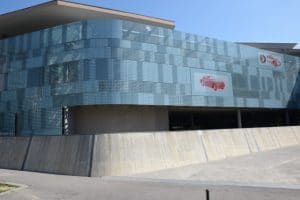 Just outside of the old town of Turin is The Automobile Museum, accessible by tourist bus and city buses.  Turin is the home of Fiat.  Renzo Piano added his effort to the Fiat factory building, designed by Le Corbusier, with a notable design for a conference center.

A little further across the highway is the elegant hunting lodge, designed by Juvarra Stupinigi, in the 18th century, for the Savoy royalty, which was appropriated by Napoleon during his stay in the area.  Half of the residence has been extensively restored to the opulence that enticed Napoleon’s sister, Pauline, to spend long months in residence away from the Borghese Palace.  The main hall is unparalleled eye candy. 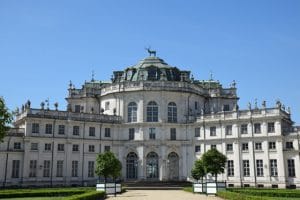 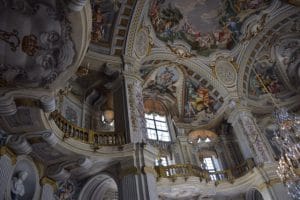 Even when the Shroud is not on view, visitors will find Turin a lovely destination located midway between the summer crowds of the Ligurian Coast towns and the fast pace of Milan.  Nietzsche lived in Turin during what may have been his final lucid years.  He proclaimed that, “Turin is the first place where I am possible.” More lucid visitors may simply discover that they wish to remain in this livable gem.

Nietzsche is also credited with saying that “God is dead, and we killed him,” to which Pope Benedict XVI replied in 2010, upon a visit to Turin for veneration of the Holy Shroud, that in the darkest of times the Holy Shroud provides a “luminous sign of a never-ending hope.”  Perhaps it is proof of the message of the pope, that despite scientific uncertainty of the origination of the linen under glass in Turin, millions of people are willing to suspend judgment, have faith, and feel the joy of the moment in a visit to Turin.