In their zest to interest cruise travelers with high-quality service, the cruise line destination port specialists have been working overtime to seek out new ports to add to their itineraries.  Ever sensitive to global issues, cruise lines have altered itineraries recently to avoid global hotspots.  The loss of favorite ports, for hopefully only the short term, means a need to insert new port offerings.  New itineraries provide a boon to frequent cruise travelers looking for more experiences at additional exciting port destinations.

For 2015, several cruise lines, including Silversea, Seabourn, Windstar, Regent Seven Seas, Oceania, Azmara, Celebrity, Royal Caribbean and Fred. Olsen Cruise Lines have added or resumed stops at ports in the Adriatic, which offer destination experiences worth noting.  CTH applauds the inclusion of the ports of Ancona/Ravenna in the north-Italian Adriatic, and Bari/Brindisi in the south-Italian Adriatic.  Below Venice, the back of the boot of Italy down to the heel, the Puglia region, is rich in history and intriguing sights.  This is the region representative of Magna Grecia, the ancient Greek settlements in Italy, and of the later influence of the Austrian-Hohenstaufen kings of Sicily, Naples, and lower Italy. 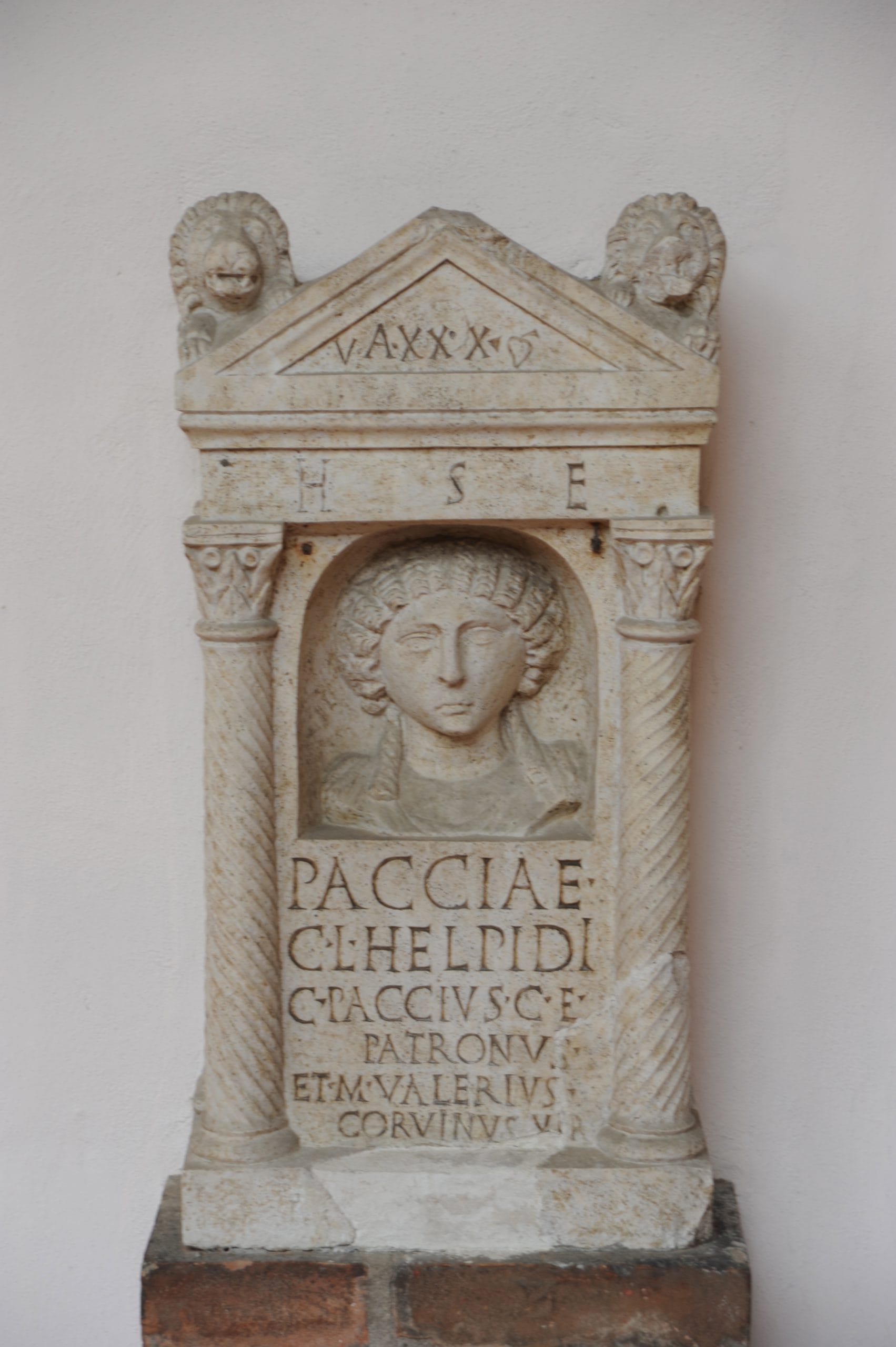 South of Venice is the gem of northeastern Italy, Ravenna.  Ravenna has a small port, directly accessible by smaller cruise ships, or by bus from Ancona.  The city is compact and walkable.  Within the historic district are churches, related buildings, and museums that hold the largest and best display of 5th century mosaics, endowed to the city by its empress, Galla Placidia.

Almost ignored by the church and historians, Galla Placidia was the daughter of the Roman emperor Theodosius I, half-sister to Honorius the emperor of Ravenna, and aunt to Theodosius II of Constantinople; all at the time that the capitals of the Christian world were Rome, Ravenna, and Constantinople, a period from 390 to 450.  Upon the death of Theodosius, and by delegation of authority and power from Honorius and Theodosius, Galla Placidia negotiated with the Roman senate, kept the Huns from sacking Rome a second time, and established leadership of the Catholic Church in Rome.  She wisely brought together a council of bishops from the far reaches of the Christian world, and anointed the father of all bishops as the pope.

The one goal that eluded Galla was the continuation of a ruling dynasty.  The rule of her son, Valintinian, was compromised by the dalliance of her daughter, Honoria, with Attila the Hun.  Galla died in 450, in Rome.  Valintinian was eclipsed in 455. 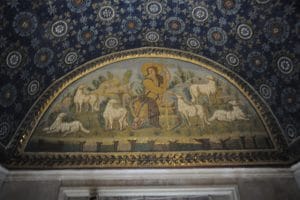 The best-preserved structure in Ravenna, with the fifth century mosaics intact, is the Mausoleum of Galla Placidia.  The building looks tiny as it sits on the grounds of the imposing Church of Saint Vitale, built in the sixth century. The whole complex was placed on the World Heritage list in 1996.   Saint Vitale was begun in 525 and consecrated as a church in 548, almost 100 years after the death of Galla Placidia.  The mosaics are lavish and extensive.  The mosaics are clearly influenced by those in the tiny mausoleum. 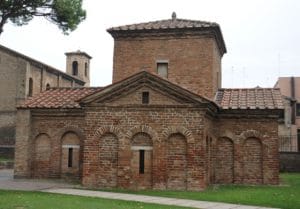 The Cathedral Baptistery in Ravenna was built in the time of Galla Placidia, although she is not often given credit for the commission.  The building is red brick, like the mausoleum, and has “blind arches” in the upper level.  The interior of the building is covered in breath-taking mosaics.  The adjoining Archiepiscopal Museum holds the chapel erected by the Archbishop Peter II, fifty years after Galla’s death.  The single small room of mosaics is not to be missed.  These too reflect the influence of Galla Placidia.

In 1371, Dante came to Ravenna, where he spent the final four years of his life.  It was here that he wrote the Divine Comedy.  In the work, Dante described the Divine Forest in Ravenna, where the pines extended down to the sea.  It was his earthly paradise.  The pines are now gone, but his crypt and paradise remains.

Other options for shore excursions from the port of Ancona are the Ancona historic district, with its Duomo and ancient city walls, and the resort town of Rimini, with its beautiful beaches. 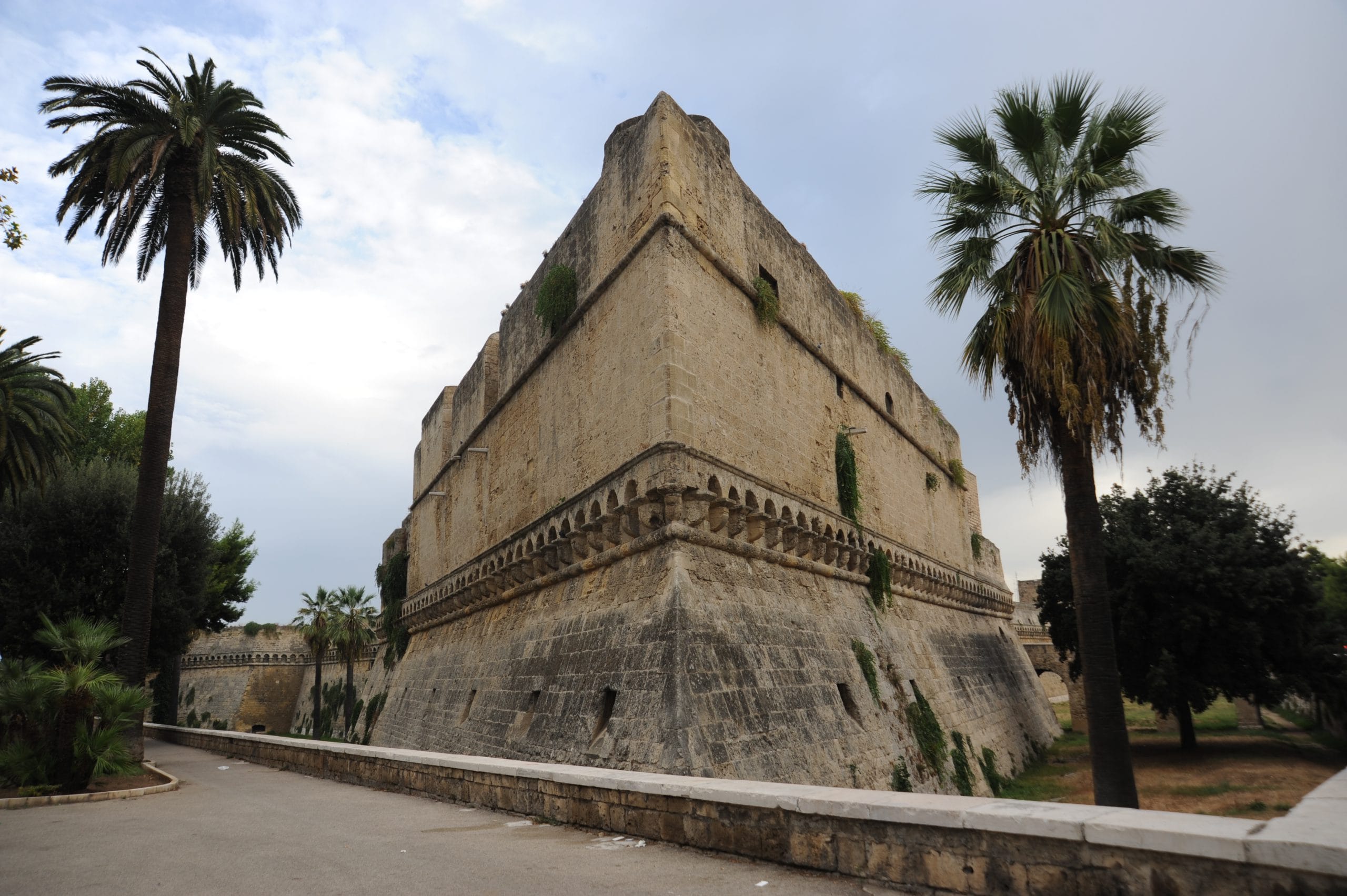 Bari was a seaport of importance from the 9th to the 13th centuries.  In the compact city center is one of the well-preserved castles built by Emperor Frederick II in 1233, the pilgrimage church of St. Nicholaos, and an imposing sea wall, where fishermen still bring in a daily catch in small buckets and lounge on the rocks.

Frederick was the Hohenstaufen king of southern Italy, who enjoyed his hunting lodges and eagles kept as pets.  No churches were built by Frederick, nor were there chapels in his castles.  The best example of his Arabic-inspired, geometrically perfect castles, Castle del Monte, built in the 1240s, is a short distance from town.  As the tour bus approaches the castle built on the hill, one can imagine Frederick in action with his eagles. 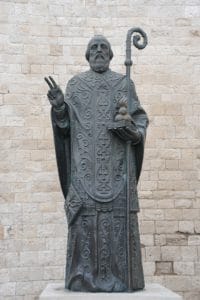 There really was a Saint Nicholaos and his remains are in Bari.  He was a Greek priest, living in a Greek town, in present day Turkey from 270 to 343, hence the Greek spelling of his name.  When the poor of the town put their shoes outside at night, Nicholaos would come by and put coins in their shoes.  There were stories of Nicholaos saving poor children from all sorts of harm.  He was a friend to sailors and those on the fringes of town society.  In one story, Nicholaos threw three purses of gold into the window of a poor man, so that he would have a proper dowry for each of his three daughters.  Upon his death, Nickolaos was immediately revered as the patron saint of sailors and children. 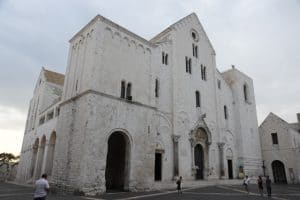 In 1087 when the city fathers of Bari wished to build a major church, they thought having the remains of St. Nickolaos would be a perfect choice for the seaside town.  They quickly dispatched a ship of seasoned sailors, who hoped to retrieve the remains before the Venetians arrived.  Venice was evidently in competition for the relics.  When the Venetians arrived, little was left in the tomb.  They may have opted for the remains of the uncle of St. Nickolaos, who was also a priest.

The Basilica di San Nicola stands today, as a splendid attraction for visitors to Bari.  It contains Roman Catholic and Greek Orthodox chapels to Saint Nikolaos.  Consecration of the crypt for the remains of the saint, in 1089, inaugurated construction of the Basilica completed in 1197.  The road to Rome, the Appian Way, ends in Brindisi. 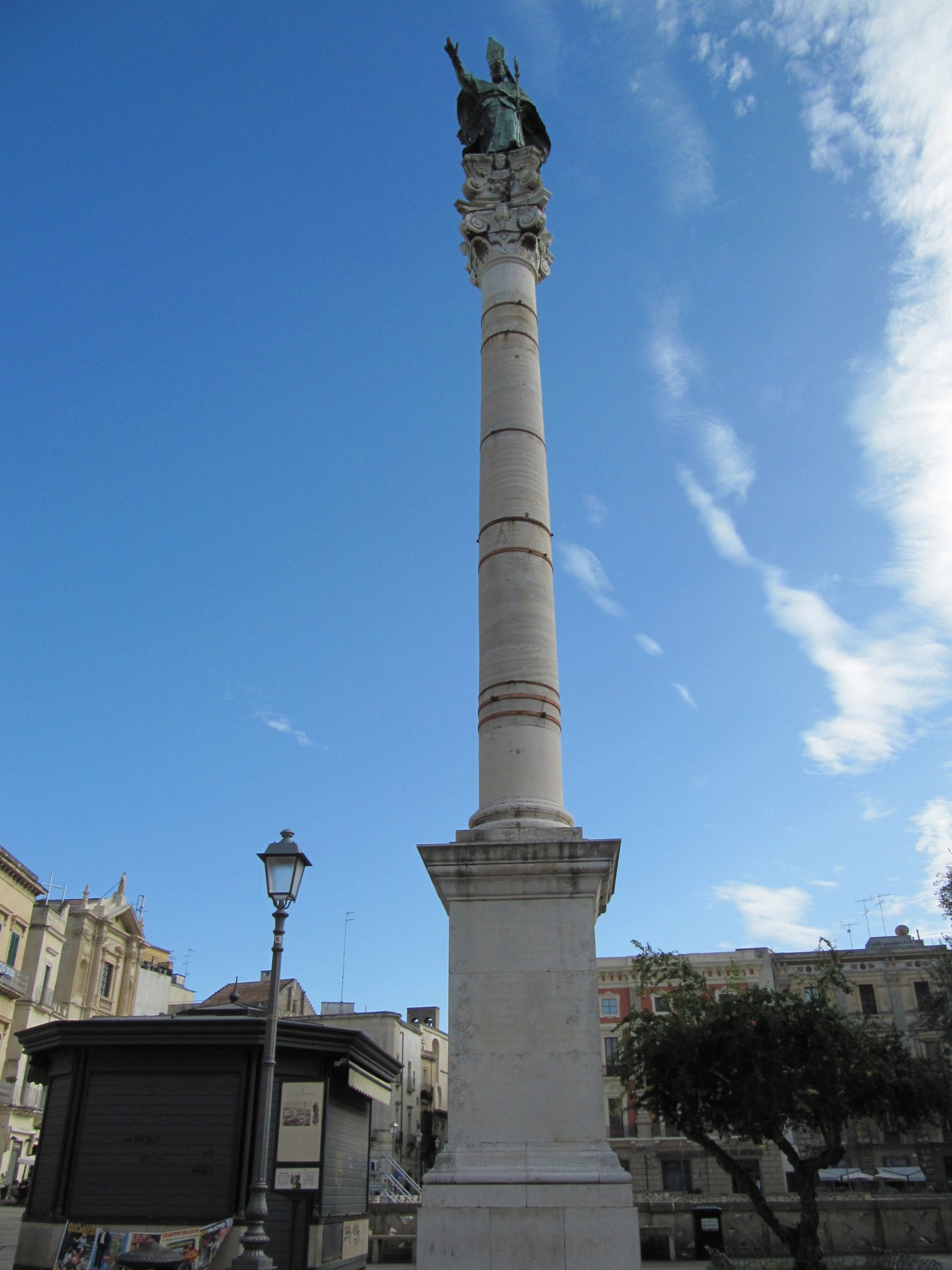 Today one of the two original Roman columns still marks the spot where boats left Italy to cross the Adriatic in ancient times. 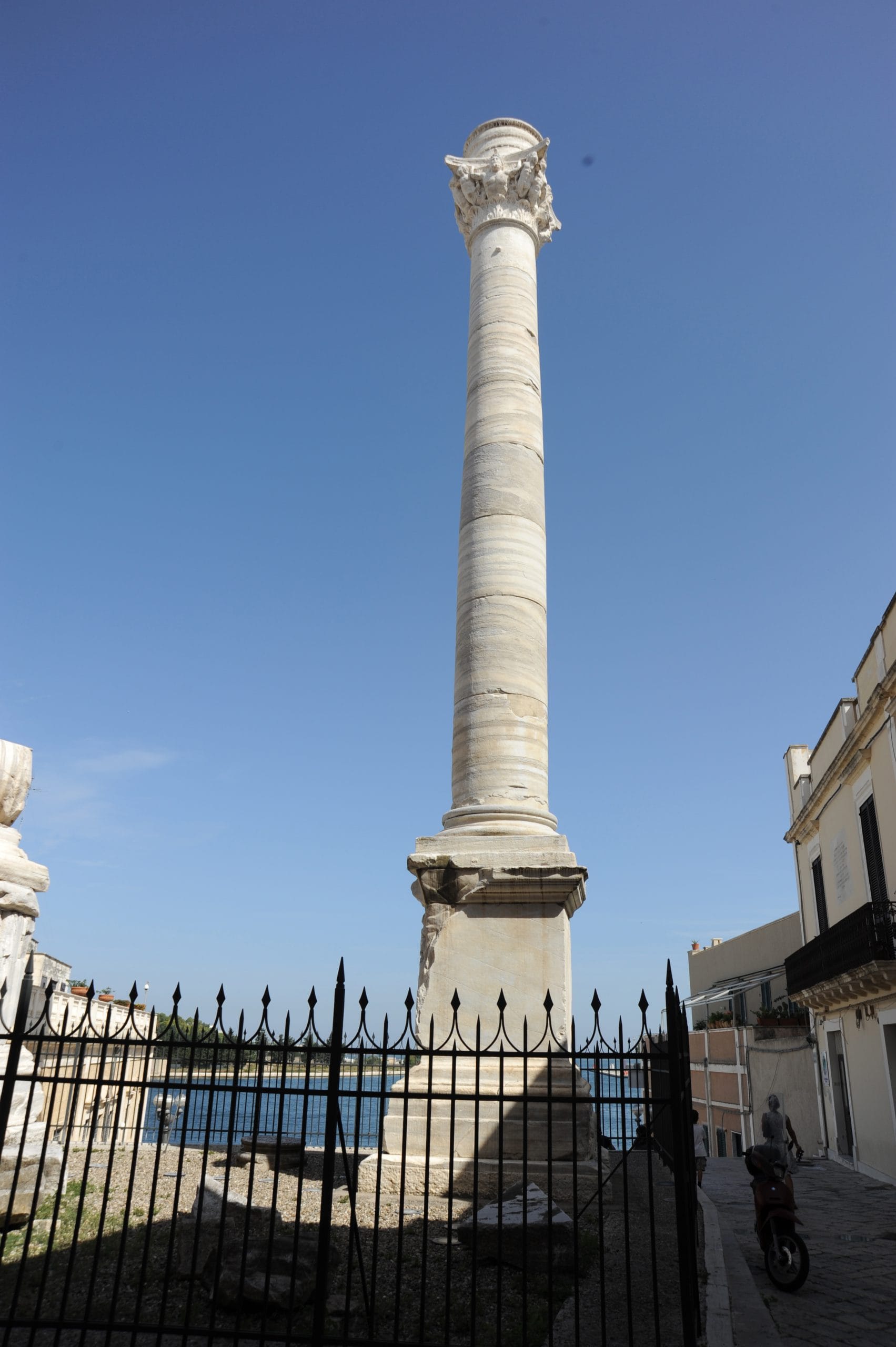 The other column was gifted by Brindisi to Lecce in 1656, in thanks to the patron saint of Lecce, who included Brindisi in his prayers and spared the city from the plague.

Lecce is a compact town filled with yellow-sandstone Baroque churches.  Few of the churches are large.  They are notable for the plethora of little angels that are mostly the work of one man, during his long and productive life.  Giuseppe Zimbalo decorated churches and the Brindisi column that now has the statue of Bishop Oronzo, the healing saint, at the top. 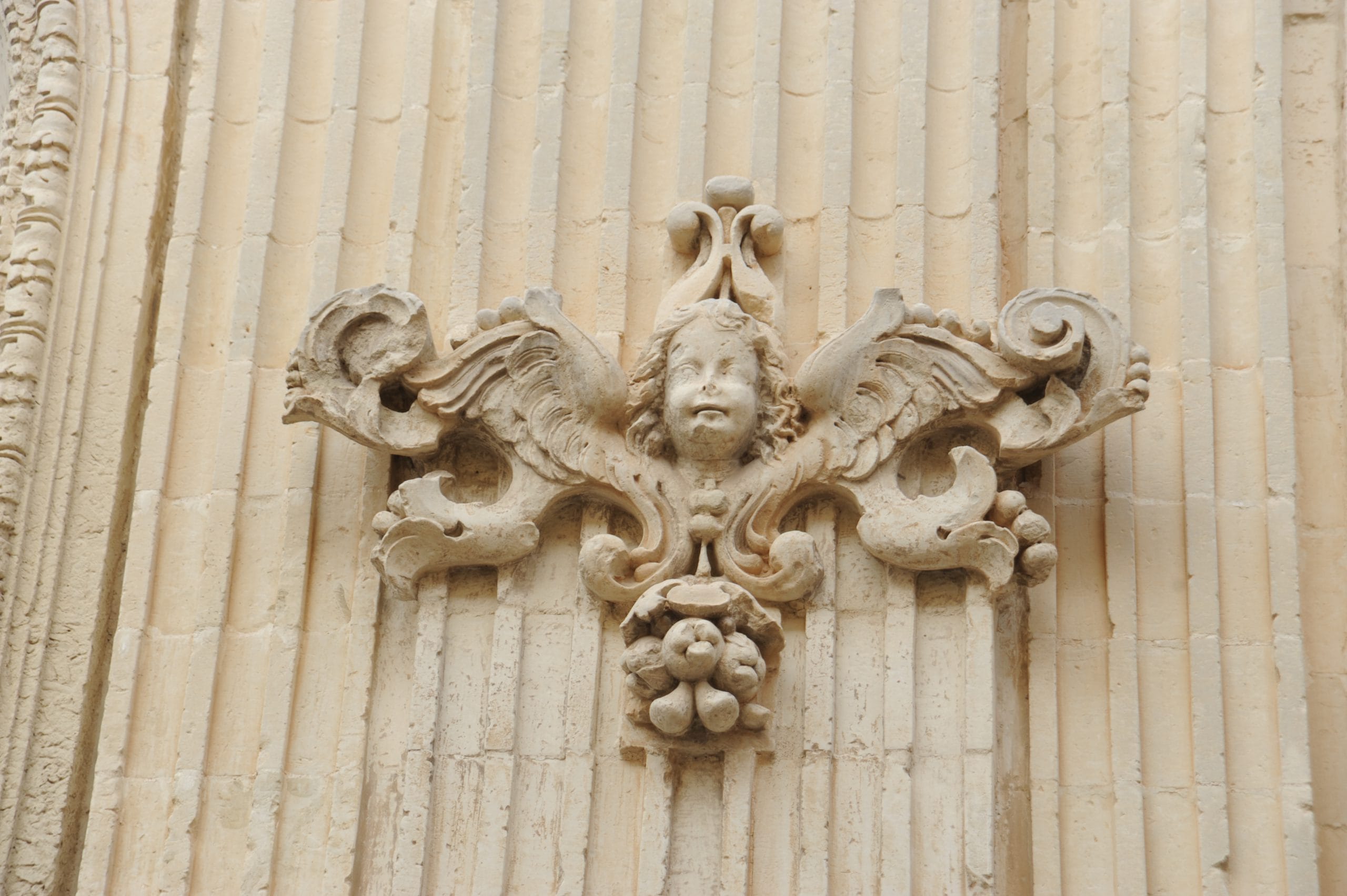 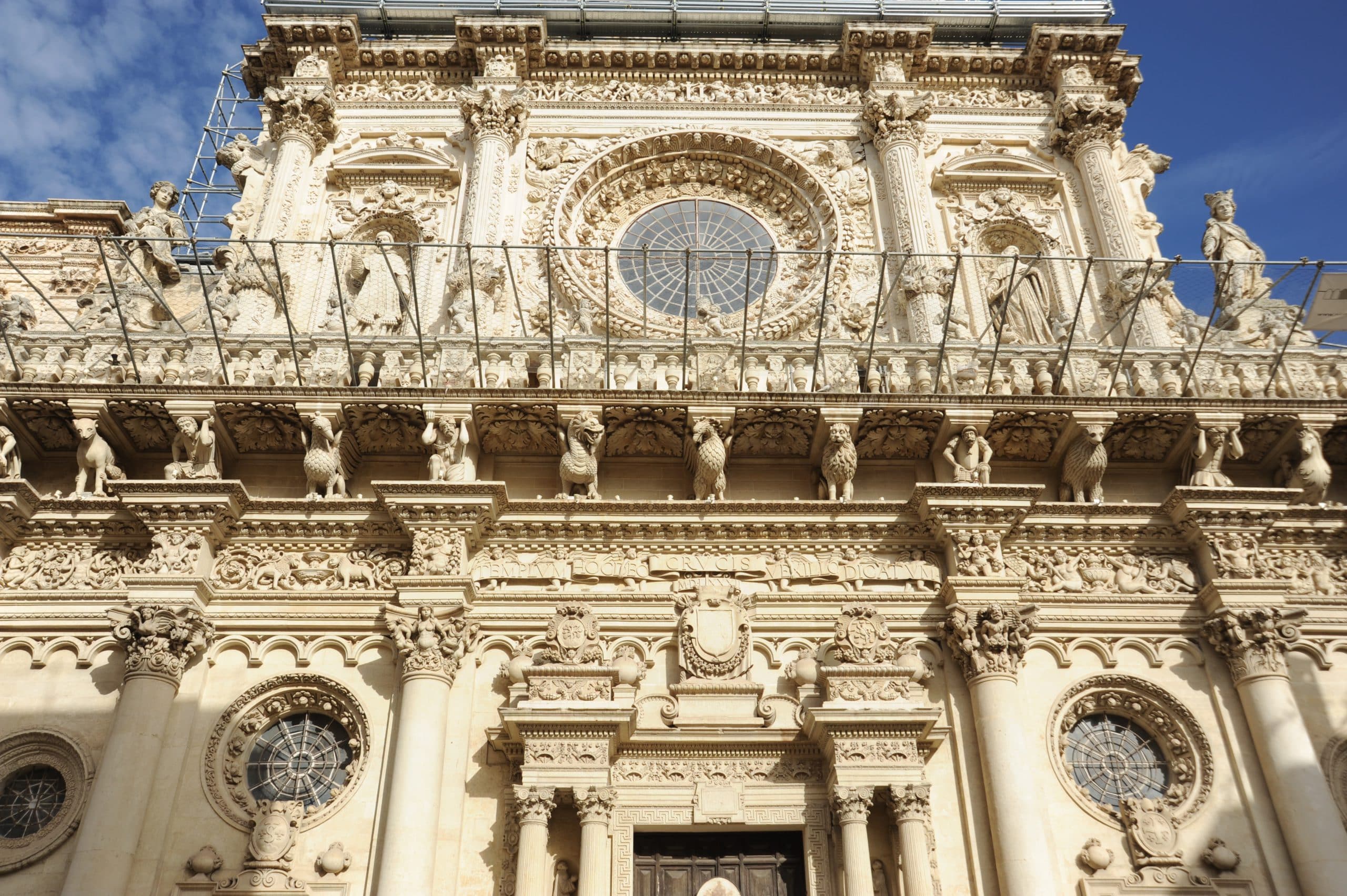 In the evening, the inhabitants of Lecce fill the narrow streets and stroll around the main plaza that opens to the archaeological remains of a Greek amphitheater.  Before the Romans built the Appian Way, Greeks came by boat to the Brindisi port and ran across the leg of Italy to Rome for fun and to prepare for the Olympics.  Today visitors relax in outdoor restaurants, such as the La Torre di Merlino Ristorante, near the Santa Chiara church and hotel.  www.torredimerlino.it

For more on the Adriatic ports of Italy, and the ports highlighted above, see Cruise through History, Itinerary II – Ports of Bari and Ravenna.