Punta Arenas, Chile’s most southern city, was a vibrant place from the 1880s until the Panama Canal opened in 1914.  Sheep ranchers from Patagonia brought their herds to the giant processing plant and shipping operations in Punta Arenas, the largest employer in southern Chile, which sent ships to Buenos Aires and the world.  Ships traveling from the Atlantic to the Pacific and reverse, avoiding the deadly winds around Cape Horn, regularly came to this port on the Magellan Strait.  In 1914 all that changed.  Herders took their flocks to more northern ports.  Punta Arenas went quiet.

Today cruise visitors stopping at Punta Arenas are amazed to find a gem of a European town in the far reaches of Patagonia.  Not yet a destination city, there is the vibrancy of a place reawakening.  The odd casino in the classical façade building on the water is a sign of life that is thankfully not affecting the charm of nineteenth century France in Patagonia.  There are no t-shirt/souvenir shops here.  Every year historic buildings, allowed to simply age, are being spiffed up to reawaken the pioneer adventurer spirit.

Punta Arenas came to be a business center as an enterprise of three men, who would have passed each other without note in any other city.  José Menéndez came from Buenos Aires as a young man to start a shipping business.  José Nogueira was a Portuguese seaman, suffering from TB, who stayed in the port for the clear, warm air.  Of modest means, he began to herd sheep.

Elias Braun left Russian Latvia, fearing for the safety of his Jewish family.  The men had nothing in common.  From their efforts grew the Sociedad Explotadora de Tierra del Fuego, or Exploitation Company of Tierra del Fuego.

Mauricio, the son of Elias, married a Menéndez daughter. His sister Sara married Nogueira.  The Catholic-Jewish, Spanish-Portuguese-European family built a company with millions of acres of grazing land on both sides of the Andes and a massive processing plant and docks, which employed the growing number of Italian and Croatian emigres to Chile.  The Sociedad was valued at $5million in 1900.

From the time Magellan discovered the passage from the Atlantic to the Pacific in 1520, Spain had little interest in establishing a presence until Sir Francis Drake sailed by for England in 1577, looking for Spanish gold.  Several presidents of newly independent Chile tried without success to find a purpose for Punta Arenas, in the first half of the nineteenth century.  A farming settlement failed.  A prison established for violent offenders and disaffected military resulted in a riot.  Gold was discovered at the entrance to the Magellan Strait in 1884.  The gold rush was short lived. 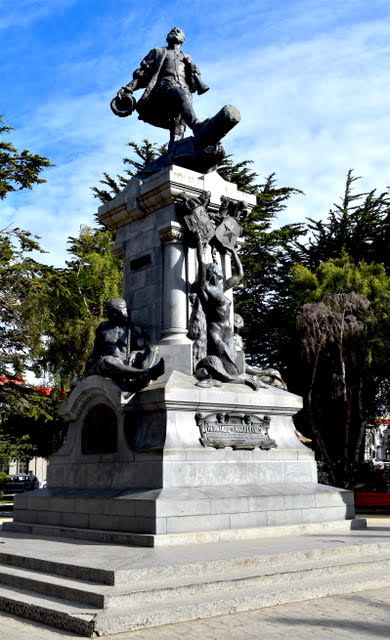 Stay tuned for Part 2 next week…