Detour to the other Barcelona at Plaza de España

Barcelona is a top visitor destination and cruise port stop for good reason. The sections of this many-faceted city immediately open to the port, from which an easy stroll down the Rambla takes visitors into the heart of Spanish/Catalonia history. Unfortunately, the crush of visitors into what has become a small highway of trinket stalls along the Rambla makes it a target. It has become a convenient place for political demonstrations.

The Rambla opens to Plaza Catalunya, site of political rallies in the recent surge of Catalonian secessionist efforts and taxi strikes. For visitors not inclined to crowds, and wishing a detour from politics, the route is simple. Instead of walking up the Rambla from the Columbus obelisk, turn slightly to the left and instead travel up Avenida del Parallel to the Plaza de España, to enjoy Barcelona with the locals. 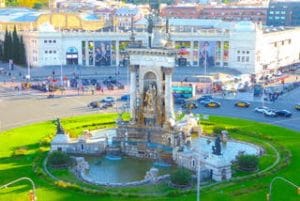 Plaza de España is at the foot of the Montjuic; the urban mountain covered by an expanse of trees on Parc de Montjuic, southwest of the central old city. Portions of the forest were cleared for the Olympic stadium. The park is shared by Palace de Nacional, the imposing museum of Catalonian art, whose dramatic entrance flows down the Avenida Reina Maria Cristina to the center of the plaza. There traffic swirls around the lively area of the city enjoyed by locals and infrequently visited by tourists.

Last October, while somewhere between 300,000 and three times that number, depending on whose is counting, of Spanish citizens, demonstrated for or against Catalonian secession in the center of the city, many families, groups of students and strolling couples walked leisurely in the Plaza de España, just to enjoy the evening. Tourists, in one of the large hotels built for the 1929 exposition, wandered out into the uncrowded streets, to enjoy the area built to showcase Spanish culture. 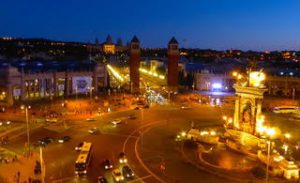 The classical fountain in the center of the traffic circle sits at the entrance to the 1929 exposition grounds, designed by Barcelona architect Puig i Cadafalch, the man whose design for the Palace Nacional was dismissed in a political maneuver. The finished palace of art is impressive, was expensive, and is similar to the original design. It sits elevated at the end of the entrance boulevard, which begins with flanking red brick towers, reminiscent of Venice. In front of the museum are the majestic stairway and the magic fountain. The fountain was magical in 1929 for its color display. Today it still enchants.

The four columns, as originally designed by Cadafalch in 1919, represent the four districts of Catalunya. The columns were demolished in 1928, prior to the World Exposition, by a dictator intent on removing all vestiges of Catalonian political expression. In 2010, new columns were erected in acknowledgment of Catalonian identity. After all, Barcelona was the capital of Catalunya before there was a united Spain. 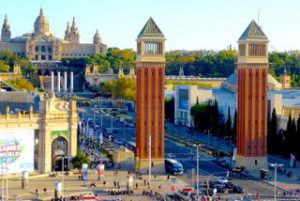 Spanish history comes together in the Plaza de España at the 17th century Castle of Montjuic and Poble Espanyol, which share the lower reaches of the Montjuic. The castle, with it crenulated towers, was a defensive bastion for the port, a prison during the 20th century Spanish Civil War and is now a museum piece. Poble is an outdoor museum of architectural styles of the regions of Spain, accumulated for the World Exposition. 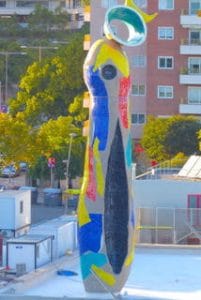 Plaza de España sits in a residential area, near the major train station. It is on city bus lines. It is at the center of life for locals. For them, walking their dogs in Parc Joan Miró, at the base of his towering sculpture Woman and Bird, is routine.

The decommissioned bullring between the park and traffic circle, the Plaza de Toros de las Arenas, has been repurposed into shops, restaurants, and a health spa, with hot pools from which to relax and view sights on Montjuic. Take the elevator to the top of the Arena for 1 Euro, free to those over age 65. Then enjoy the view. 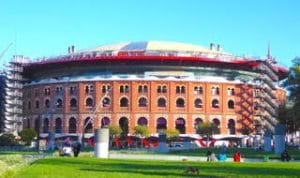 Whenever media events discourage visiting Barcelona, take a detour from frequented sights to explore and dwell in Plaza de España. Enjoy Barcelona like a local. 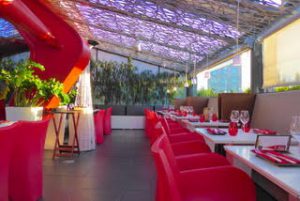