London to Rome – Along the Coasts of France, Iberia, and Northern Italy 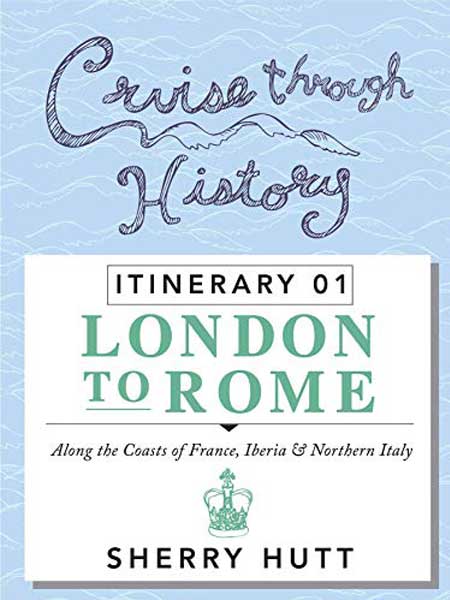 An enjoyable cruise itinerary, particularly for the first-time cruise traveler, is the itinerary that includes the ports of Western Europe.  Many of the ports will be familiar names.  This volume of stories to enhance the trip includes unfamiliar escapades associated with familiar people and places.  The stories will also introduce new personalities and a depth of knowledge of new places to the traveler’s repertoire.

The stories in this itinerary were selected for their entertainment value, as well as a connection to sights the traveler may visit.  There is no attempt to tell the full story of a port-city.  The stories give reasons to linger in port.  They will vary in era from port to port, across three millennium of human habitation of Western Europe.

This itinerary includes the origination of the term, “itinerary.”  It includes stories of the first travelers as tourists, rather than as explorers, crusaders, or some other ruse for leaving home for fun.  Tour agencies and guidebooks go back as far as the first tourist.  They evolved as professional services, particularly after the invention of the printing press.

As this cruise embarks from a London harbor, so does the first story.  Meet Ralph Fitch, who left London in 1583, to intentionally become a tourist of new and exciting places.  He did not intend that the trip would last eight years and four months.  The odyssey that began with five fellow travelers, ended with Fitch returning to London alone.   His cruise took him through the Mediterranean to Syria, down the Gulf of Hormuz, around India and as far to the east as Singapore.  Along the way he experienced everything from feasts to prison.  Fortunately he kept a diary from which his story can be told.

The first port, on the north coast of France, is Bayeux.  Many travelers have heard of the Bayeux tapestry, but do not realize that it is an early, and lengthy, political cartoon.  The story of the tapestry involves one of the most vicious, auspicious, and ambitious members of the family of William the Conqueror.  That the tapestry survives is a story in itself.

The port town of Saint Malo is a beautiful little city of charming shops.  It is also the historic home of the eighteenth century French Corsairs, a fancy name for pirates.  They lived well in mansions, beautifully furnished.  The homes are historic places today some of which are open to the public.  The stories of the real-life pirates have been recounted by near contemporaries, so we know they are amazing yet true.   In the same community lived a nineteenth century hermit monk turned sculptor.  Abandoned by his flock and ignored by the local community, he used the driftwood and rocks on the side of a mountain to sculpt a commentary of his world.  Visitors can carefully visit that little world today and then have an elegant twenty-first century organic lunch.

Cruise destinations in Brittany often include the ports of Pont Aven and Lorient.  Pont Aven remains today as quaint and filled with artists as it was when Paul Gauguin lived there and founded the Pont Aven School of art in the 1890s. There are three additional shore options for travelers at the port of Lorient.  The story of how Lorient became the major shipping center is one of eighteenth century greed and political involvement that rivals twenty-first century stories of the undoing of major corporations, government bailouts, and boardroom intrigue.  Down the road is the charming town of Quimper, home of French faience and the story of the classic Breton farmer depicted on highly collectable tableware.  Before the ship leaves the harbor, note the remains of a Spanish fort built in 1590, after the forty virgins of the town defied the builder of the fort, Don Juan, when they took to the sea.

The small port of La Rochelle is new to cruise itineraries.  It is full of history from the Knights Templar to German submarines in World War II.  The story here is a tale of self-sacrifice and philanthropy that began as a get-rich-quick scheme in 1196, and ended seven years later in an unexpected way.

There are many stories that could be told of Bordeaux, the site where Katherine of Aragon married her Henry.  For this story the traveler will take a shore excursion to the heart of wine-county at St. Emillion.   The story is set in the caves where wine is now aged.

At the resort port of Biarritz there are two palaces to visit.  Napoleon III built the Hotel du Palais in 1854 for his queen Eugenie.  Enjoy the story of the hotel in all of its opulence, while having lunch on the patio overlooking the beach.  A short drive from Biarritz will take the traveler back in time to the sixteenth century at Hondarribia on the border of Spain.  There the story is one of preservation of the old castle and fort, which is now an inn.

In Bilbao the story is a modern one.  A muscular building, a singular museum, brought together by a philanthropist, an architect, and city leaders to revitalize an entire community.  The Bilbao has redefined what is possible in a partnership that is a tourist delight.  In La Coruña civic engagement sought by an enterprising king, who wanted to boost tourism, resulted in a ninth century church of spectacular beauty.  The story of Santiago de Compostela is one of the saint and the seashell, the emblem of pilgrimages along “itineraries,” of the faithful and the fun seekers for a millennium.

On most cruise itineraries there are days at sea.  On this itinerary there are two stories that take place at sea.  The eastern most battle of the American Civil War took place off the coast of Cherbourg, France.  There, in 1864, the Confederate ship the Alabama was in port for repairs.  The Alabama was notorious for victories over United States ships.  The unexpected appearance of the USS Kearsarge resulted in a spectator delight, recorded in newspapers and oil paintings.  As the cruise ship nears the Gates of Hercules, the Straight of Gibraltar, it would be a perfect moment to join travelers on the deck and toast to the lost city of Atlantis.  The city is imagined to be in any number of places, from southern Spain, to the gates of the Atlantic, to a small town in Sweden.  Seeking Atlantis is an ancient and contemporary story.

The main cruise ship ports of Portugal are Oporto and Lisbon.  The story at Oporto is that of Joseph James Forrester, who came to Oporto in 1860, to take over his uncle’s port wine business.  His manifesto for remaking the entire Portuguese economy was self-published and provides great insight to the man and his task.  Also in Oporto is the story of the Museum Soares dos Reis, a museum today and a witness to history from the time it was a private home, a factory, and a military base.  In Lisbon the palace is a must see for travelers, including Hans Christian Anderson, who wrote about it in his diary in 1866.  The story of the palace is one of an artist, who was a reluctant king, and his love for a young opera singer.

As the cruise ship enters the Mediterranean, there are three ports in Spain included on this itinerary.  Seville is the setting for the unfamiliar story of the familiar name of Miguel de Cervantes.  His personal story is more eventful than his fictional account of Don Quixote.  Imprisoned by Turks, and sentenced to death by flogging, all this quiet man wanted was to write a popular play.  Instead he wrote the first modern novel.  The story for Valencia is that of El Cid: the man, the myth, and the movie.   At the port of Barcelona the story is the architecture of the city.  From the first settlement of the site by Hairy and Baldy, before they fought to its destruction, to the rebirth of the city by a group of inspired architects, the result is the unique style of Barcelona’s Catalan Modernisme.

There are many stories to tell along the French Rivera.  The choices here take place in Marseille and Nice.  In 1499, French soldiers returning from the Italian Piedmont brought with them the card game of tarot.  Marseille is the world center of tarot.  It is an art form, a set of political statements hidden in cards, and a point of pride for French printers.  Travelers may find an unexpected souvenir, or learn something new about themselves in the cards.

Garibaldi is a name familiar to most travelers, who may not realize he was Italian because he was born in Nice.  Nice was part of Italy until Garibaldi unified Italy in 1860.  He turned the new nation over to its king, and the king’s chancellor gave Nice to France in exchange for military assistance against Austria.  Garibaldi’s story is so enjoyable to tell, that he told it himself in a multivolume autobiography.  His many women friends tell it even better.

A story of Florence must take place during the Renaissance.  The characters are the self-promoting, flaming, Friar Savonarola, the patronizing pragmatist Machiavelli, and the self-indulgent pope Alexander VI and his children, Ceasar and Lucrezia Borgia.  A second story is devoted to the heroines of the Renaissance, the princesses from the leading families whose homes dot northern Italy from Florence to Venice.  On a short bus ride from Florence to Pisa, the traveler will ride down the same road that brought pilgrims to the Holy Land during the crusades of the fifteenth century.  The road runs past the Square of Miracles in Pisa, which looks much the same today as it did when built.  On that square is the leaning tower of Pisa, still leaning.  The story in Pisa is of the five Pisanos who built the tower.

The final story is a modern tale of intrigue in a place of historic intrigue, the Vatican.  This is the story of the theft of a manuscript from the Vatican library to let the traveler know that all good things worth visiting need to be protected.

Whether enjoyed as a history book, or read by the traveler port-to-port as their itinerary unfolds, the characters in the stories may become new friends.  They are assembled here as a Cruise through History to add meaning and delight to travels.