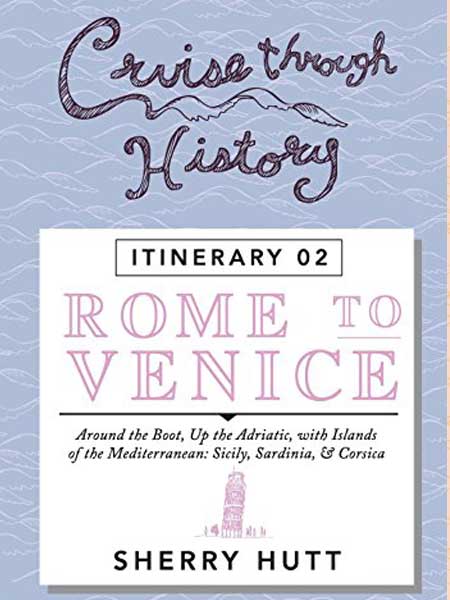 This second installment in the Cruise through History series, Rome to Venice, takes the cruise traveler around the boot of Italy, up both sides of the Adriatic, with port stops on the islands of Sardinia, Corsica, Sicily and Corfu. At each port there are stories of historic characters, some familiar and some new friends. The stories go beyond explanations of who built the castles and monuments, to tell the personal tales. These are inspiring stories of achievement.

Almost a thousand years before the birth of Christ, Greeks rowed west on the Adriatic Sea, landed near Brindisi, and ran from the heel of the boot of Italy to where Rome stands today. They did this for fun and games. Hundreds of years later, Romans paved the road from Rome to Brindisi. It became the Appian Way, Queen of the Roads. That all roads led to Rome created a civic burden on the Pope, who was a religious and military leader as well as the mayor of Rome. Chief among papal accomplishments was the Vatican Library, now home to manuscripts by historic figures, religious and secular.

Italy and the surrounding islands provided space for Greeks to leave their crowed homelands and think new thoughts. The stories on this itinerary include those of Archimedes, Dionysius, Empedocles and Saint Nicholas, all men with roots in Greece, who lived in Italy. Italy produced a crop of poets, engineers and architects in Virgil, whose egg protected Naples from harm, Onofrio, whose fountains kept Dubrovnik healthy, and Zimbalo, whose angles grace the many churches in Lecce.

There is no shortage of heroes on this itinerary from Rome to Venice: Odysseus came home to Cephaloniá; Pinocchio was the puppet who became a morality tale; Garibaldi led the Thousand in Sicily, then retired to Sardinia; Canova brought the four horses of St. Marks home from France; Frederick II resisted the pope and built hunting lodges instead of churches; and Salvius led a slave revolt before Spartacus. There are also unnamed heroes, including the leaders of the first Sicilian Vespers and the little musicians who defeated the army of Sybaris by playing music that made the war horses dance.

The Greeks were not the only ones to enjoy the Italian seaside. Visit the ancient giants in Sardinia, in their unique conical villages. Walk the wall of Dubrovnik and visit the retirement home of Roman Emperor Diocletian in Split, Croatia.

As always, the stories on a Cruise through History are arbitrarily chosen, but are ecumenical. On this itinerary the traveler will visit ports where the leadership, strength, and wisdom of women leaders were of major impact. Živa chose to be married in the middle of Lake Bled in ancient times, in what has become an ideal place for destination weddings today. Galla Placidia, mother of the western Christian world, financed commissions for mosaics of lasting beauty in the fifth century, while also finding time to establish a papacy and protect Rome from barbarians. The fleeing women of Sicily asserted their independence, just as Elisabeth, empress of Austria, expressed her need for solace and independence when she built her Achílleion Palace in Corfu. Letizia Buonaparte raised an emperor and remarked that she diapered and disciplined more future emperors and princes than anyone. Letizia is almost unheard of except when connected with her son, Napoleone Bounaparte. As he gained fame he dropped vowels.

The women on this itinerary share their homes with you. The nymphs of the caves of Cephalonia greet travelers today as they did Odysseus coming home from the Trojan War. Justa holds continual open house in Herculaneum as she waits for her court case to be decided and her freedom established. Elegant women of the Renaissance built homes eighty feet above the mud-entombed Herculaneum, such as the Sforza palace, now a hotel.

Whether enjoyed as historic tales, or read by the traveler port-to-port as their itinerary unfolds, the characters in these stories will become new acquaintances. They are assembled in a Cruise through History to entertain travelers.