Every town in Southeast England has parish churches, some of which grew into seats of ecclesiastical power and became cathedrals.  The Middle Ages, so often depicted for the depravations of feudal society, was also a time of innovations in architecture that resulted in majestic Gothic cathedrals.  In the evolution of church architecture there is a display to be seen of the development of social structure from conquered people, to feudal society, to an international commercial power.  A contributing factor to the making of a powerful Great Britain may be seen in the compliment and competition between royals and the church.  There is no better way to illustrate that story than the monuments to self, the cathedrals into which lords and ecclesiastics poured their resources.

Examples of the best of centuries old cathedrals anchor the towns of southeastern England.  A few of these cathedrals are highlighted below.  To enhance a tour of these magnificent sites a little background in British-religious history and church architecture follows.

In 597 Pope Gregory VII desired to convert the Saxons in Britain to Christianity.  He made religion palatable to the Saxon pagans by replacing their practice of ritual sacrifice with Church Ale.  The feast included imbibing in vast amounts of ale brewed in the church nave, followed by dancing.  The pope sent St. Augustine to England to convert pagans and build churches.  It is estimated that between the arrival of St. Augustine and the 12th century, one-half of the manpower and resources of England were devoted to building churches.  Portions of some of those churches remain today.

That so much of the critical resources of a developing nation were consumed for so long a time in service to church building might seem counter-intuitive to the rise of England as an international power.  In fact, the investment was well spent.  Only a portion of the church complex was devoted to the cathedral.  Included also were monasteries, home to budding clerics and teachers of ecclesiastical and commercial learning.  Colleges in the monasteries attended by the best and brightest of young men, were schools of agriculture and business, as well as religion.  Pupils learned to develop international commercial ventures on which the wealth of a nation was built.  Building churches spurred the local economy and enabled technological development in architecture.  Non-farm jobs were available to craftsmen.  Decorating churches created defacto art museums.  There was a church/secular symbiotic relationship that was highly successful.

Villagers attended church daily.  More villagers feared the consequences of failure to attend church service than a visit from Vikings. Church towers began as lookouts.  Bells were added later to call people to service and as warnings from attack.  The church porch was the place to be informed of all the latest news.

In the transition from Roman-pagan beliefs to Christianity, Roman building styles were incorporated into early churches.  The terms altar and basilica come from Roman architecture.  Early Anglo Saxon churches were simple stone buildings, rectangular in shape, with a small rectangle addition at the front for the altar.  English altars are distinguished from the curved altar vestibules typical in Europe.  Entrance was from the side at the back of the nave seating area, which evolved into a porch.  The porch was a meeting area and the place to post important notices.

When the Normans added more ritual and singing to the church service a choir-stall between the nave and the alter area was inserted.  Alters were further recessed into an area, known as the chancel.  This was the domain of priests.  To accommodate processions, the center aisle was widened.  Norman churches had strong walls, narrow windows, and were painted inside with colorful pictures that have not survived.

From the arrival of the Normans to the Black Death that was from 1340 to 1400, the population of England doubled to about two million.  The number of churches did not increase rather they increased in size. The wealthy parishes of knights and nobles rebuilt and enlarged churches well beyond the needs of parishioners who might attend service.  The churches were an expression of affluence.

Twelfth century England was ready for a technology that would enable larger and grander church edifices.  Complex vaulted ceilings accommodated a transept, which is a cross aisle midway across the nave.  This allowed room for private chapels, baptistery fonts, and tombs or monuments to those with the wealth to commission construction.

The Gothic style of English churches began with Canterbury Cathedral in 1174 to 1184 and spread throughout England.  Windows that had been held by an arch became a pointed opening, larger, and in greater number.  The simple vaulted ceiling became a star vault of six or eight sections, enabling higher ceilings.  Higher walls allowed a wider nave, with internal columns and side aisles.  Transepts became more narrow and further back from the chancel.
There was an opportunity for the church to become a vehicle for display of great wealth in the Decorated style of churches and in the Perpendicular style begun in the 14th century of several windows in a row.  This was all before Reformation, Puritanism, and civil war caused a hiatus of great church development.  In the dark period monasteries were demolished and churches were left in ruin. 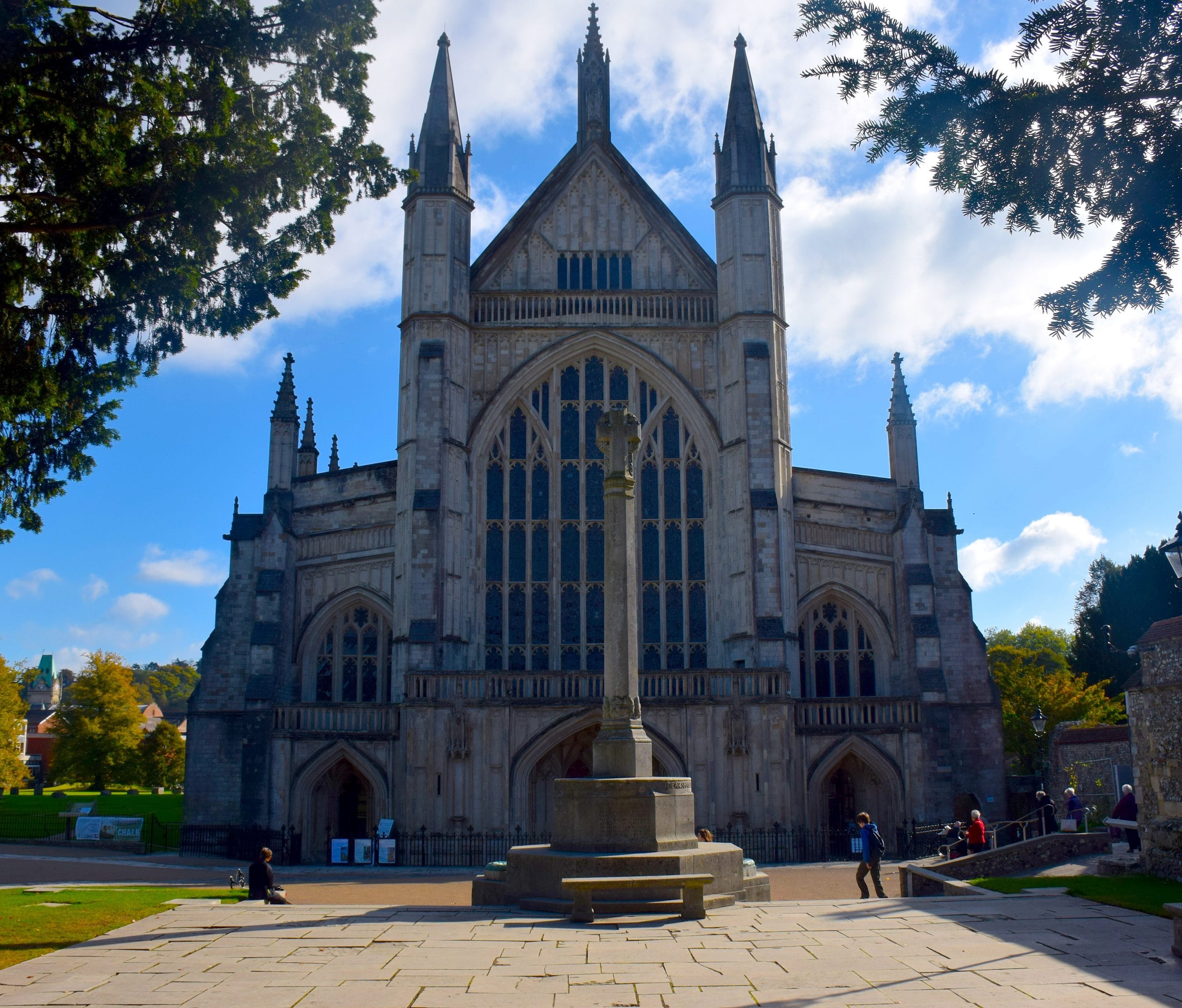 Winchester Cathedral is an example of the Perpendicular style, with repeated tall narrow windows along the nave, at the front, and in the tall elegant bell towers.  The large internal arches separate the nave from elaborate side aisles.  At opposite sides of the forward nave are side structures for the porch on one side and vestry on the other side.  Attached to the complex was the chapter house for monks and chapels commissioned by notable patrons.  Some of the later structures survive.

During the reign of Elizabeth I pulpits were added to churches to better enable parishioners to hear the sermon.  Charles I, who enclosed the chancel and alter with rails, restored altars removed from churches by Henry VIII.  In 1660 Parliament required the Royal Arms to be displayed in the Church of England.

Half of the churches in use in England today were rebuilt after the 1815 Battle of Waterloo.  The Church Building Act of 1818 accounted for construction on 214 churches.  By 1832 people wanted to abolish the national church and rid themselves of the cost of maintenance.  Wealthy patrons assumed the expense.  Today churches ask donations from visitors or charge admission.

Touring Cathedrals from Southampton to Dover 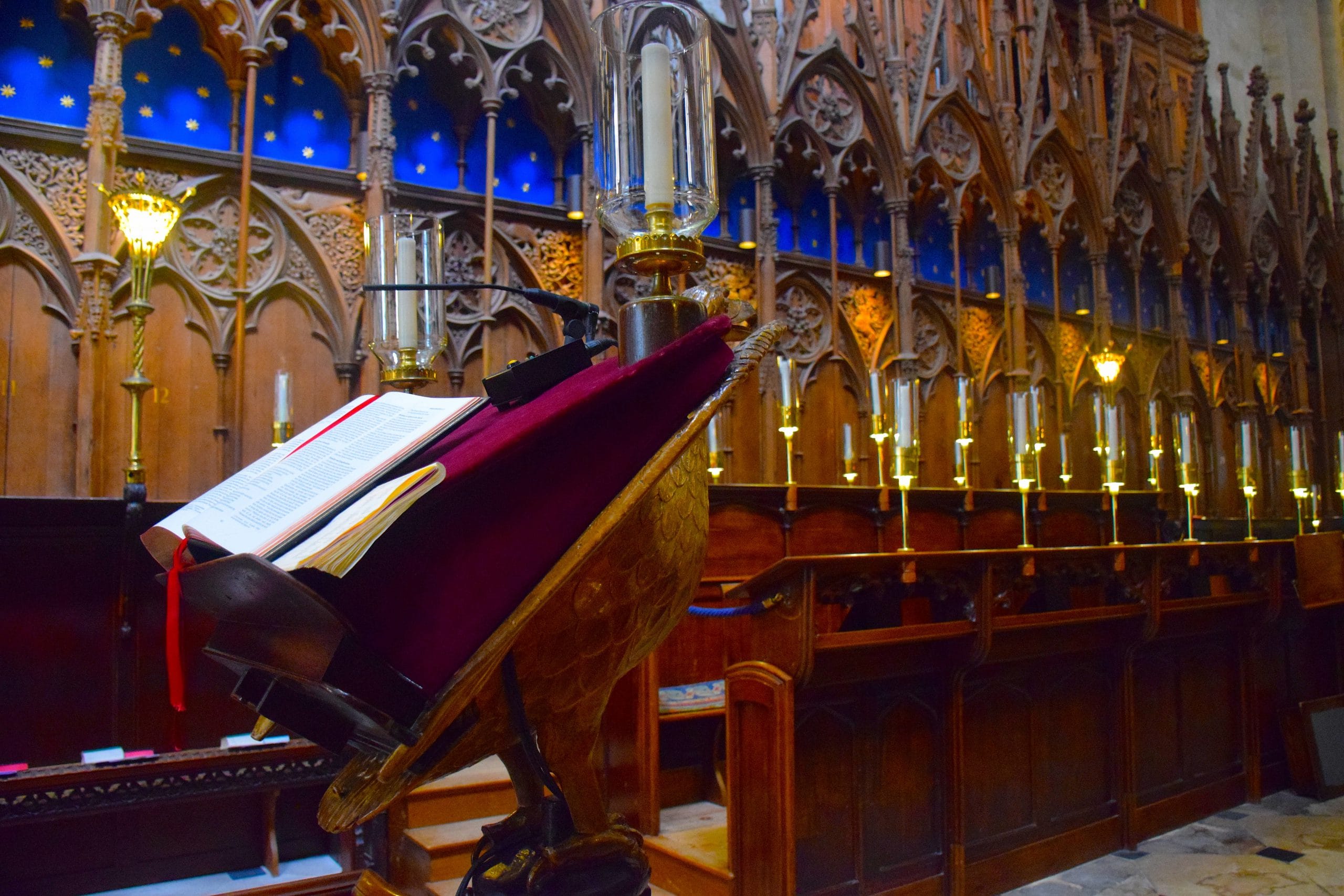 Winchester Cathedral:  Winchester began as an ancient capital, home to Anglo Saxon kings, who built a church on the site in 648.  William II oversaw the present church development in 1079.  He was buried in a section of the Cathedral in 1100.  The Anglo Saxon church tower collapsed in 1101, some say because of William’s presence, and was replaced by a Norman tower.  Additions to the cathedral were made over the next 500 years, including the choir-stalls in 1308. 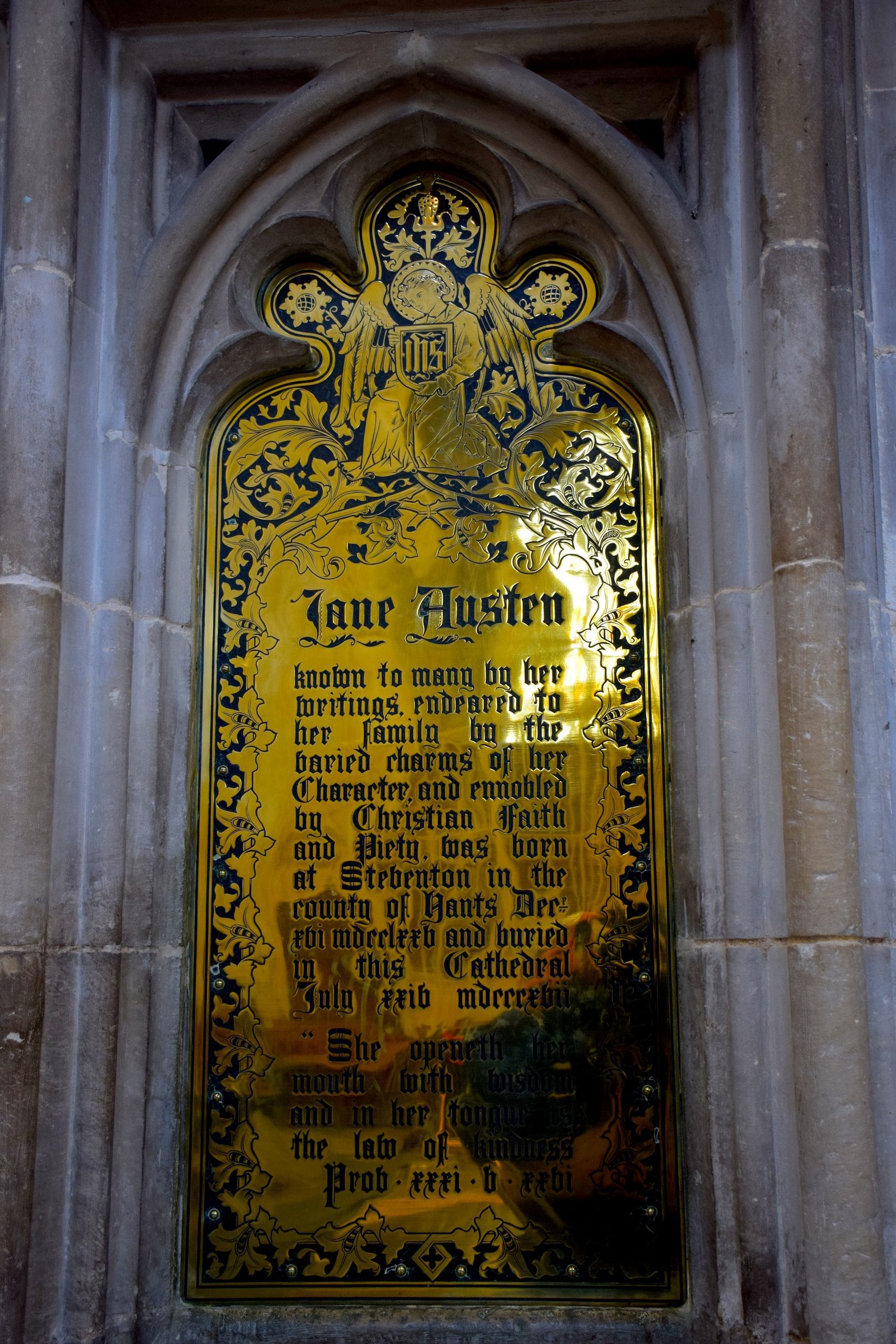 Jane Austen is interred in Winchester, as are the remains of Viking King Cnut.  Cnut’s bones are certainly in a chest in Winchester Cathedral, although they may be in several chests.  During the English Civil War of 1642 to 1651, church tombs were plundered and bones left piled on the floor.  Unable to sort out the remains, they were randomly swept into mortuary chests.  Alfred the Great was entombed there.  Despite closing of the monasteries in the time of King Henry VIII and the later Reformation of the church, his bones may still rest within the church vaults. 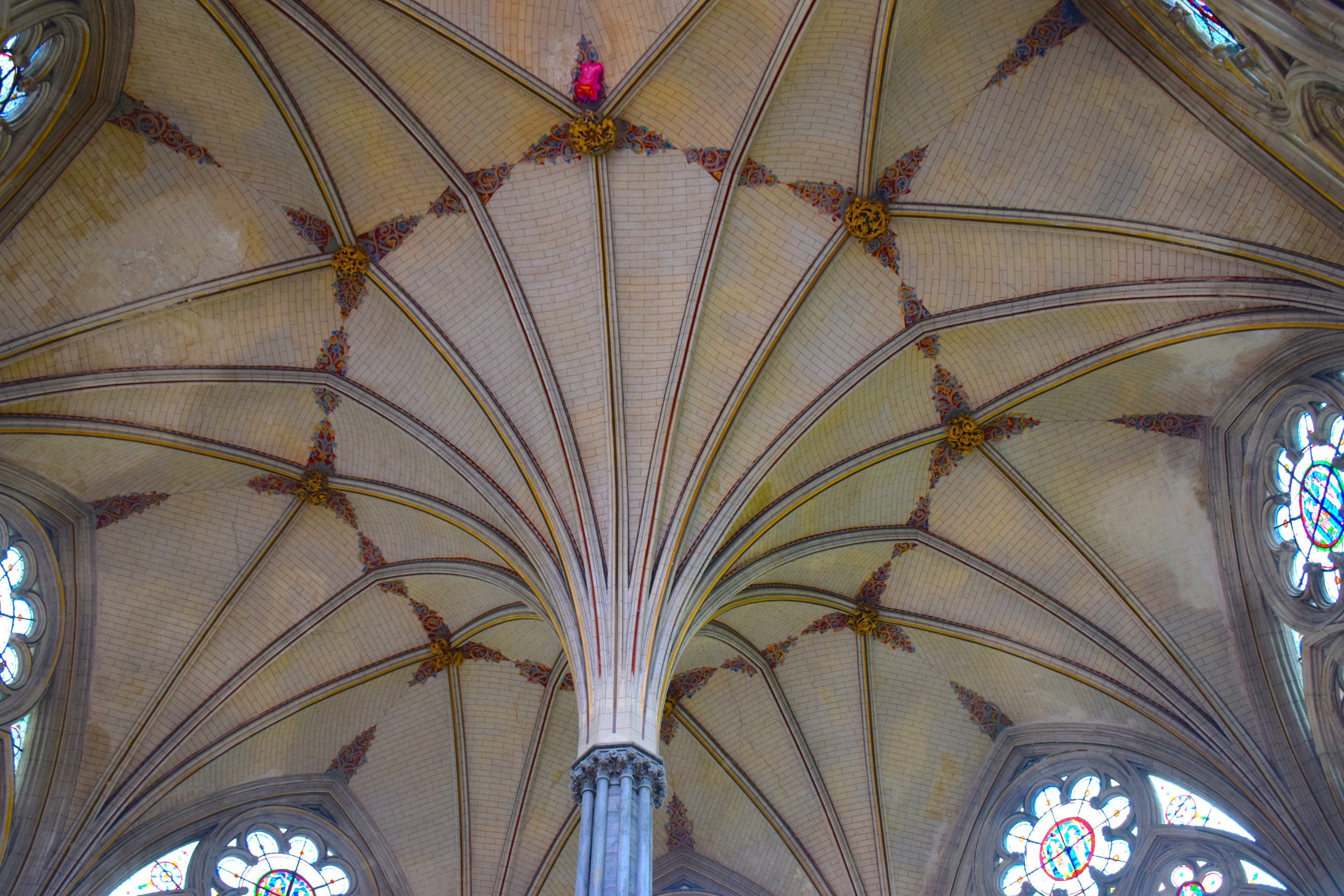 Salisbury Cathedral:  Salisbury maintains portions of its 13c medieval town walls.  The cathedral has a 404-foot spire added in 1334 in the Gothic style, on a nave begun in 1220.  The chapter house was completed in 1300.  Inside the cathedral museum is a copy of the Magna Carta signed by King John in 1215. 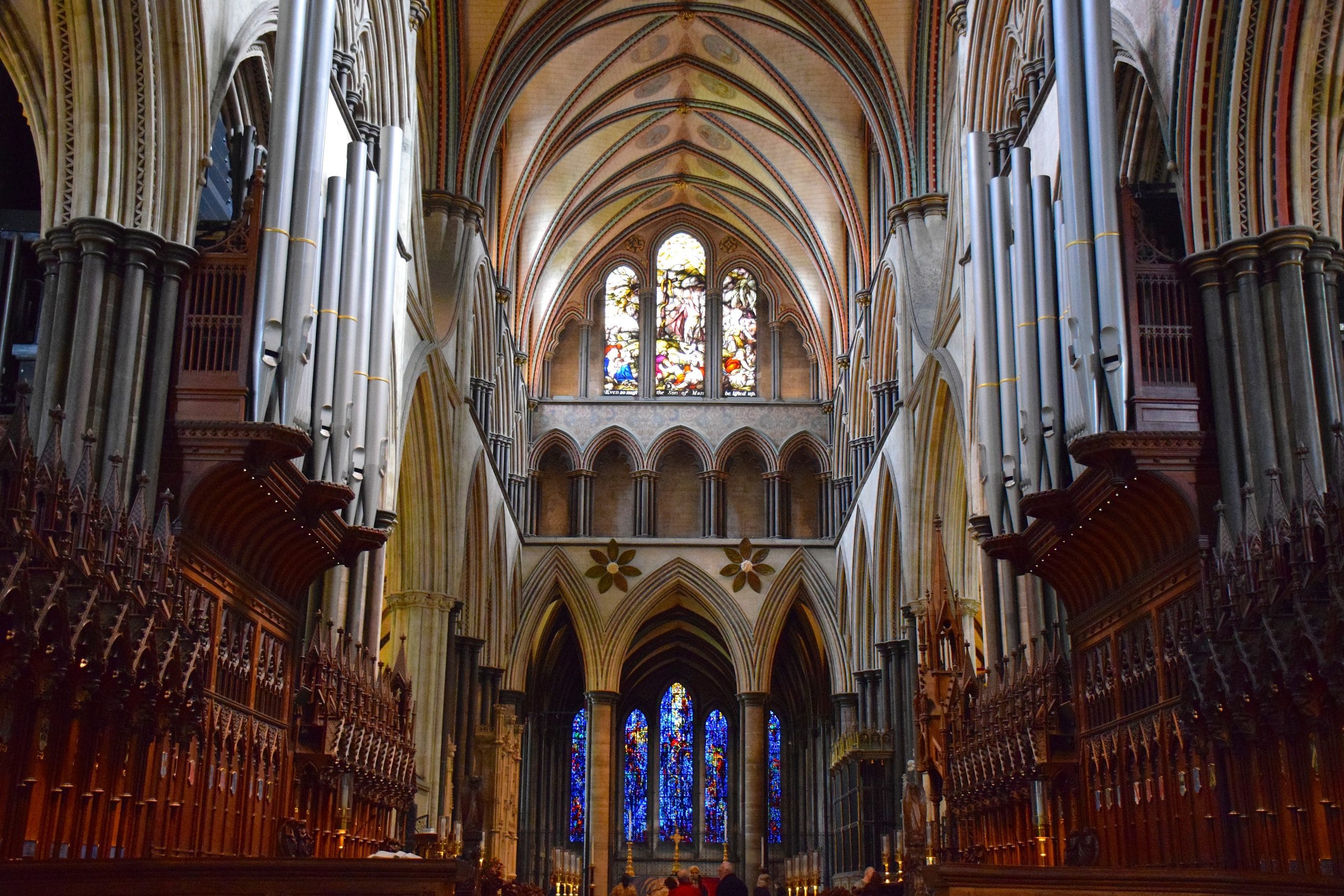 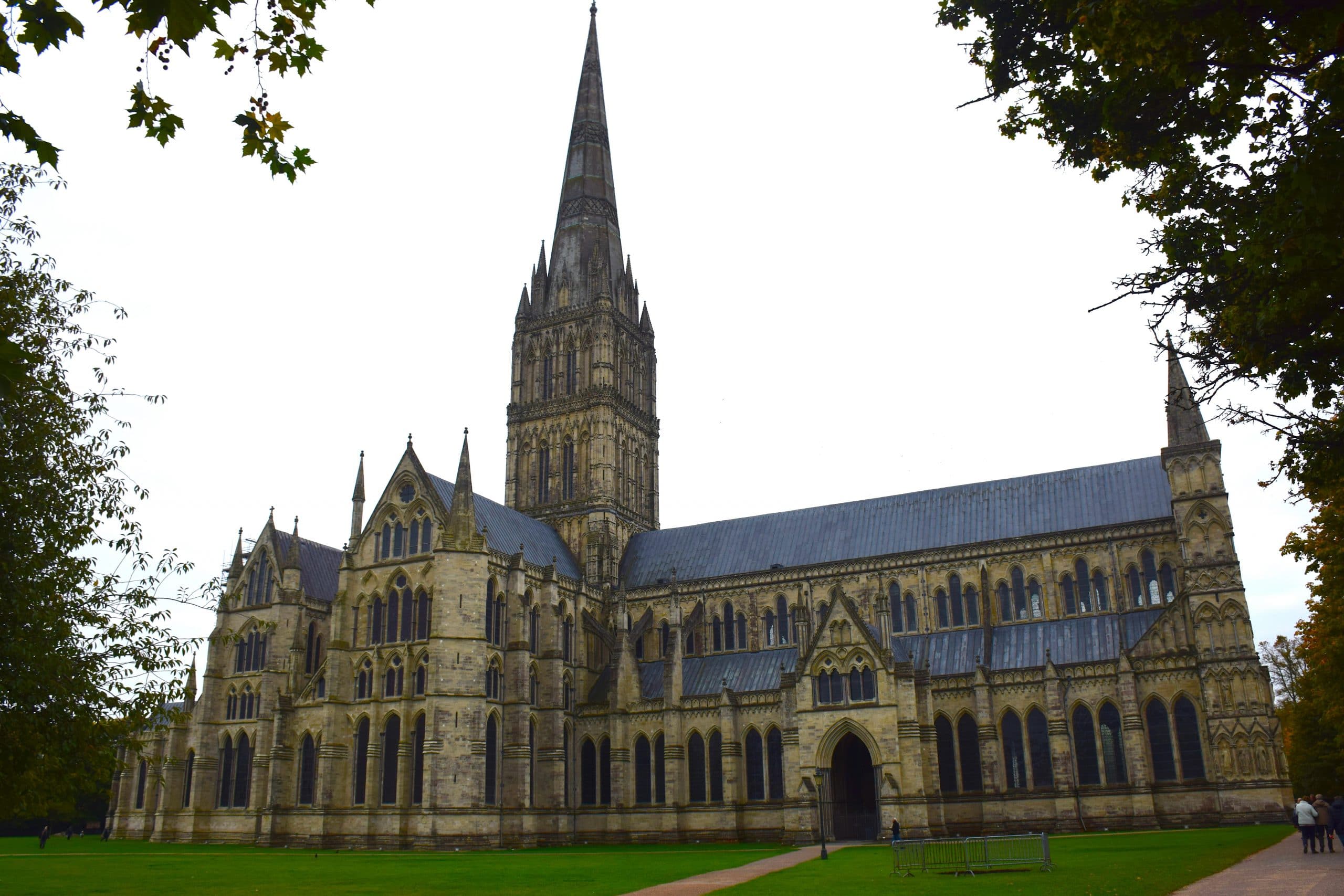 Canterbury Cathedral:  Canterbury began as a Roman town.  In the 6th century it was the capital of the Anglo Saxon kingdom of Kent.  St. Augustine came to Canterbury to Christianize England and built one of the first churches in the town.  Under the present alter is a 6th century Saxon chapel, with its thick columns. 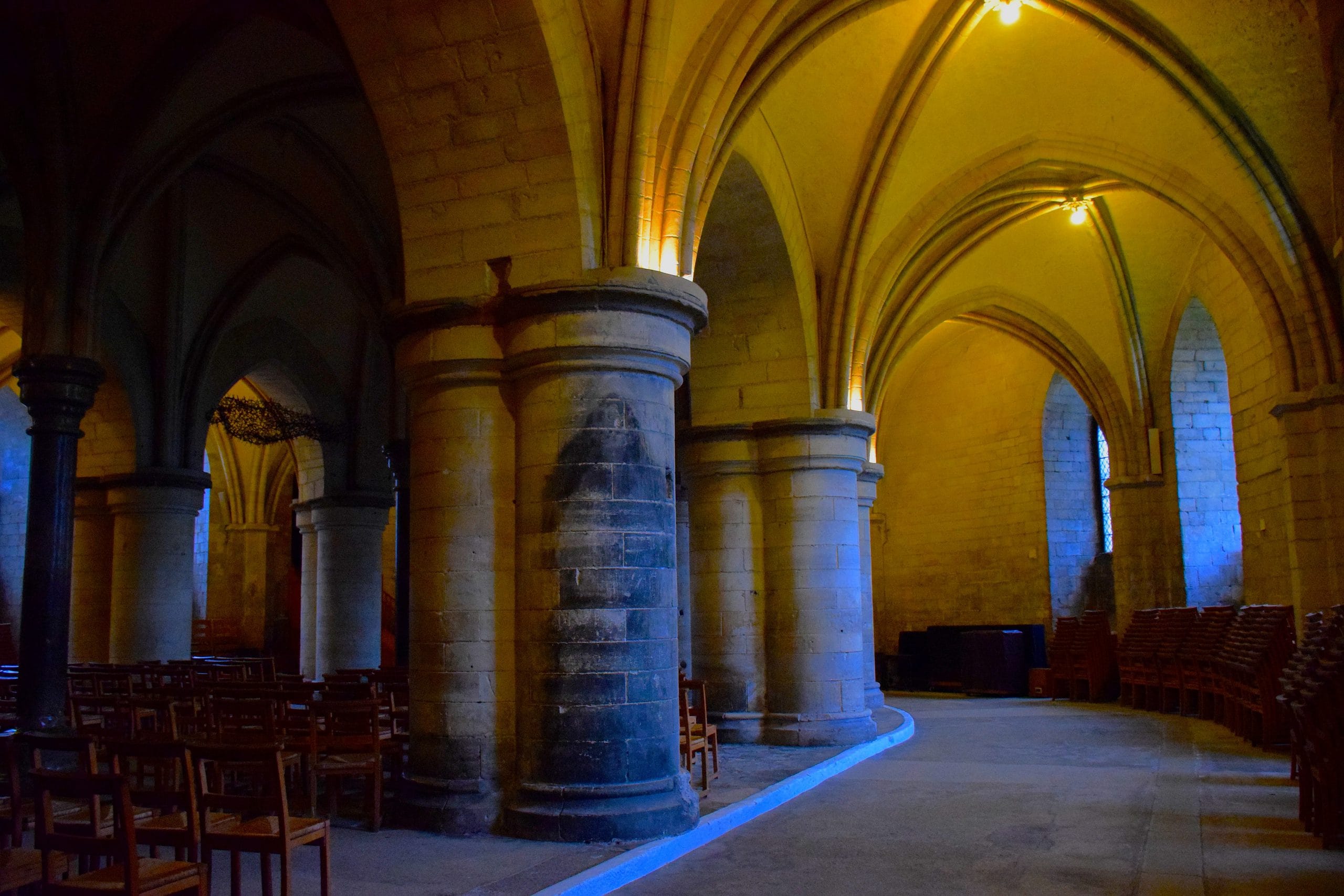 wide pillars of the Saxon chapel beneath Canterbury Cathedral 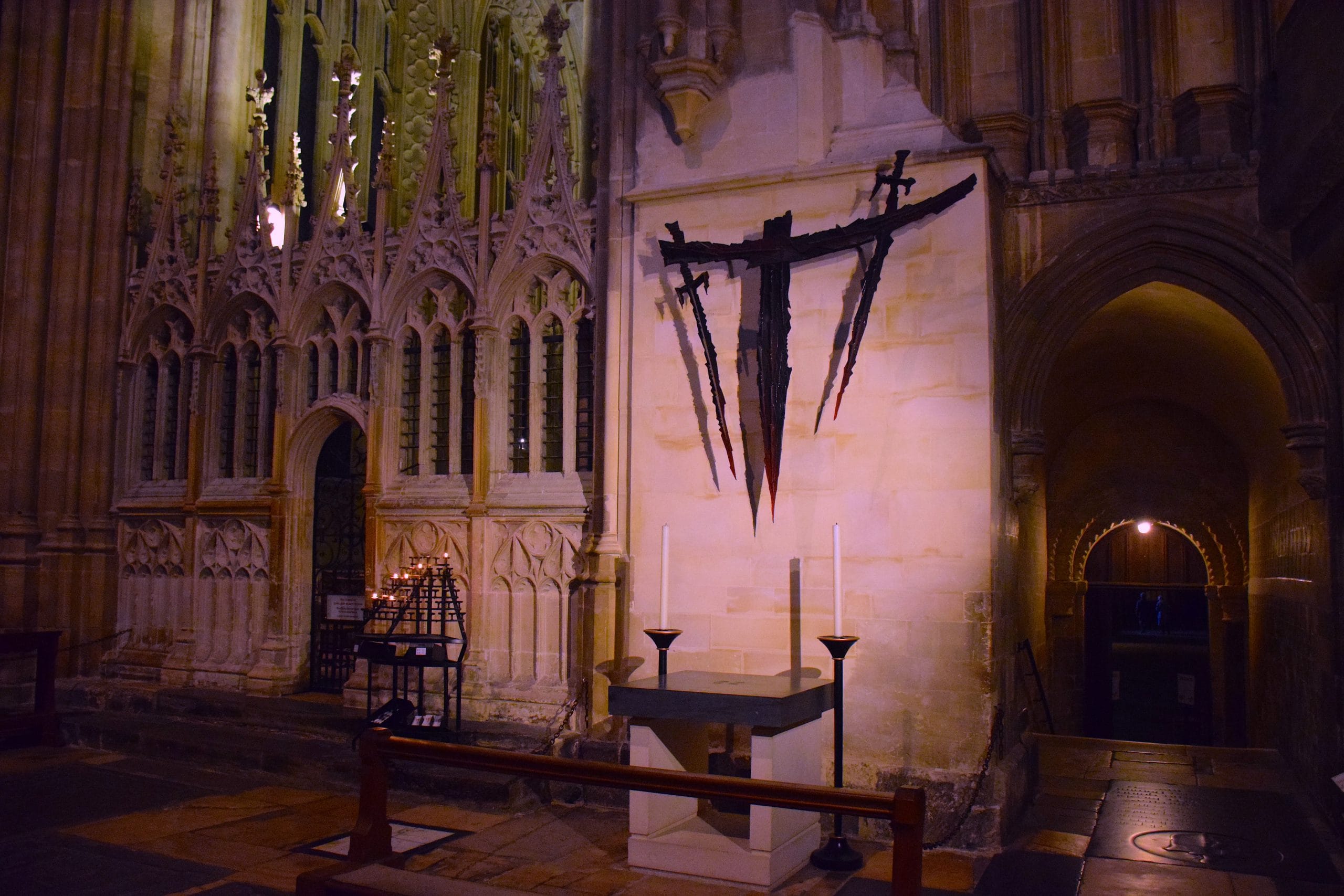 monument to the Murder of Archbishop Thomas Beckett in Canterbury Cathedral

William I built a Norman cathedral in 1066, of which one tower survived until the 19th century. Thomas Beckett was murdered in the cathedral in 1170, and his shrine in the cathedral brought pilgrims to Canterbury, making it a wealthy town. In the Trinity Chapel is a shrine to Becket. Tombs of nobility, including the 1371 internment of Edward, the Black Prince, can be found in the Canterbury Chapel.  There are two cloisters, a chapter house, and an infirmary cloister on the cathedral grounds.  The North Hall of the cathedral has a covered stairway where pilgrims would stay.  These pilgrims were the inspiration for Chaucer’s Canterbury Tales. 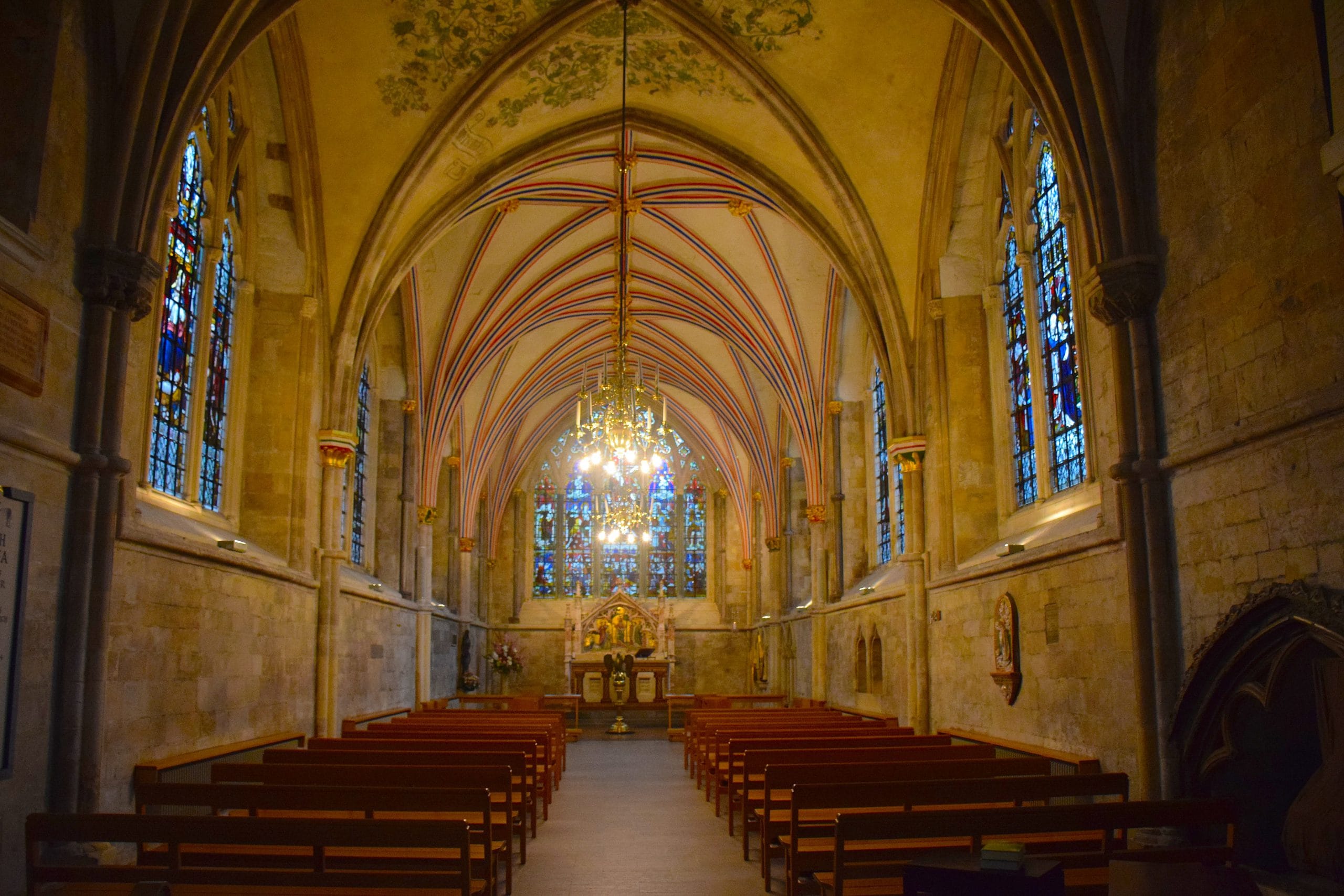 Chichester Cathedral:  The cathedral walls were begun in 1090.  After a fire, the vaulted ceiling was completed in 1187.  The initial church was in the Norman style with thick walls, rounded arches, and minimal ornament.  In 1861 the tower and spire collapsed and were rebuilt in replica of the prior church.  Inside the church are sculptural reliefs dating to 1125.  In 1290 there were hospital beds along the wall and a chapel at the end.  There are stained glass windows by March Chagall. 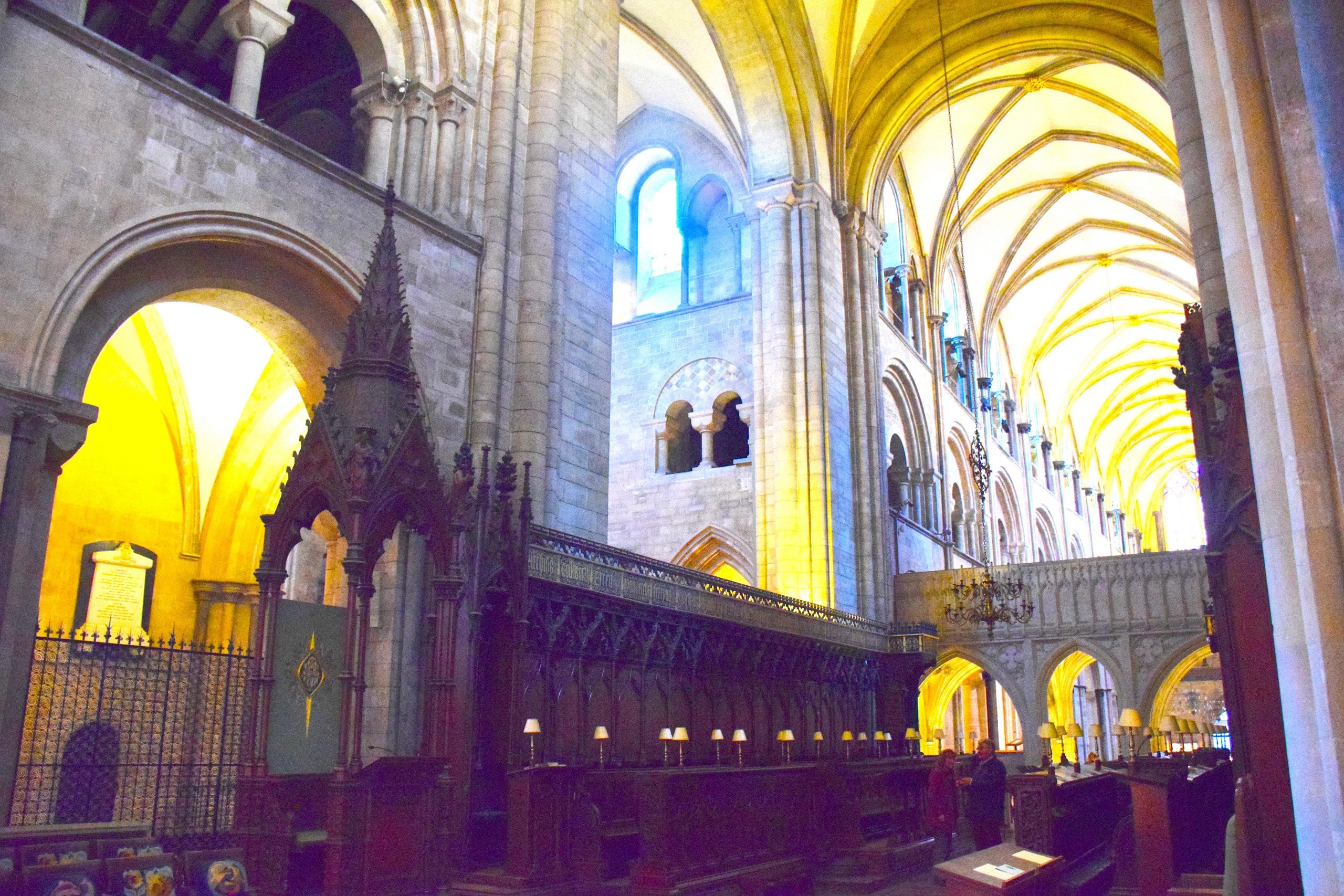 a view of the choir and nave beyond, showing a transept and side monument areas

All of these frequently visited cathedrals have active parishes.  They are as much monuments to the tenacity of religious practice as markers of tumultuous history.  Stain glass windows that remained for hundreds of years and withstood civil war and the Reformation were replaced in the 19th century in a period of modernization.  Cathedral historic groups are constantly seeking to restore windows where they can and failing that replace them with art that will endure for centuries to come.  The endurance of the cathedrals is inspiring to all.