Northern Utah Gems: The Golden Spike and the Spiral Jetty

On May 10, 1869, the great race to lay railroad track across the American territory came to a climatic finish at Promontory Point in Northern Utah.  The goal of the owners of the Union Pacific and the Central Pacific railroad companies was to be the first to reach Ogden Utah, on the east bank of the Great Salt Lake.  At stake was domination of commercial and passenger service made available by the first transcontinental railway in the country.  It is most often said of the moment in May when the ceremonial golden spike was driven into the last rail, that the railway companies started from ends of United States to create a unified nation. 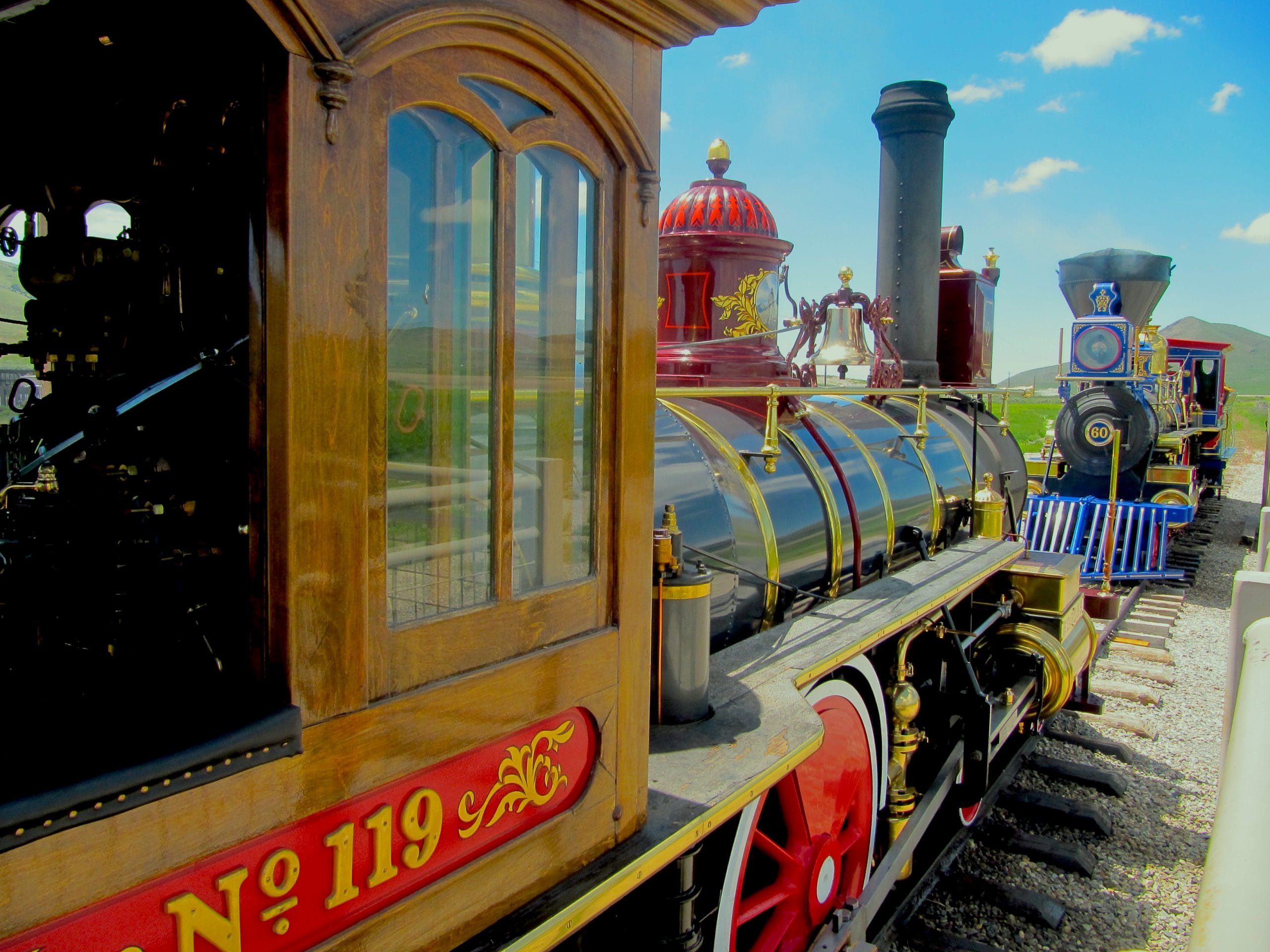 When the rails met from east and west, officials of the Central Pacific arrived in the locomotive engine known as Jupiter and officials of the Union Pacific arrived in engine No. 119.  Hundreds of dignitaries and railroad workers witnessed the driving of the final four ceremonial spikes joining the rails that spanned the continent.  Among them were the eight Chinese laborers who laid the final rails. 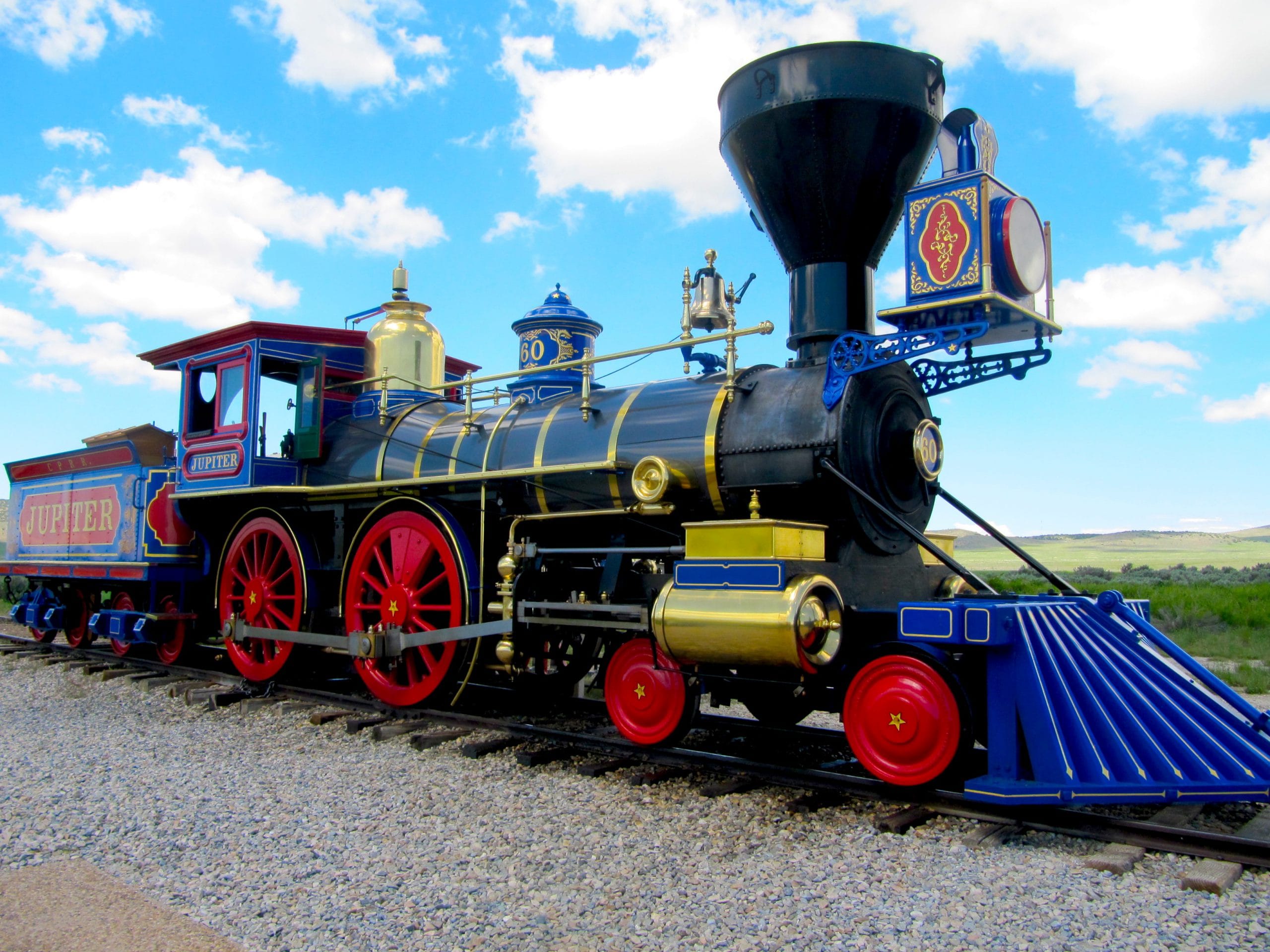 Governor of California and president of the Central Pacific Railroad, Leland Stanford, swung the mallet first and missed the spike.  David Hewes swung next, on behalf of the Union Pacific, and missed the spike.  The near misses may have been intentional.  The golden spike was engraved as a historical piece, destined for a museum.

There were four specially made ceremonial spikes: Leland Stanford’s gold spike, now in the Cantor Arts Center at Stanford University; a gold spike donated by the San Francisco News Letter; a silver spike from the state of Nevada; and an iron, silver and gold spike from the Arizona Territory. 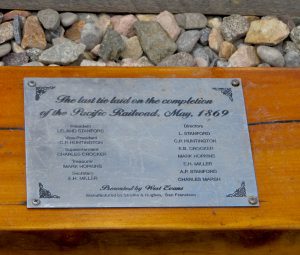 Golden Spike National Historic Site, managed by the National Park Service, invites visitors to relive the historic moment when the two locomotives met on a single track.  The Jupiter and No. 119 engines seen today are faithful reproductions.  They bellow smoke several times each day as they move toward each other in the warm months.  During the winter, the engines may be visited in their sheds near the NPS visitor center.  For more historical information about the trains and reenactments of the May 10 event, in which public participation is possible, visit the NPS website at:www.nps.gov/gosp. 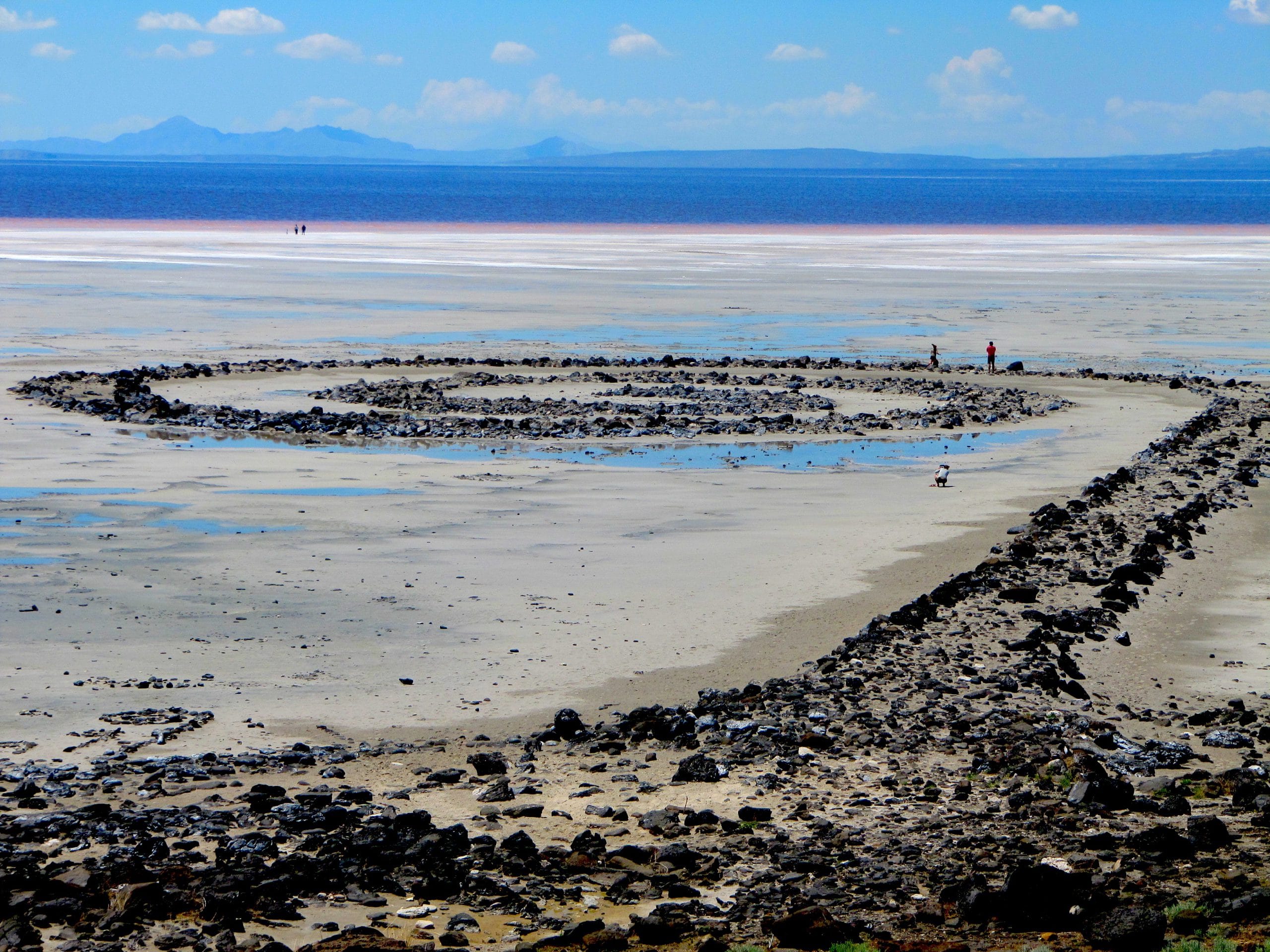 In 1970, the American sculptor Robert Smithson traveled out to the northeastern edge of the Great Salt Lake in Utah.  He was driven to create site-specific art in contrast to the celebration of the epitome of the machine age taking place sixteen miles away at the Golden Spike National Historic Site.  Although he was aided by heavy equipment to move over 6,000 tons of rock into the lakebed, Smithson labored to create a simple spiral of salt crystals, basalt rock, and mud, all found naturally in proximity to his work-site.  His vision was a fusion of art and science in his statement on nature in an industrialized world.

The first years of the work, the Spiral Jetty, were uneventful.  Smithson acquired a twenty-year lease on the site prior to creating the work.  The salt crystals in the red sea played against dramatic sunsets, recorded in photographs by the artist’s wife.

Smithson died in 1973.  At that time his Spiral Jetty was under water.  It remained submerged for most of the next three decades.  In 1999, the Smithson estate transferred the artwork to the Dia Foundation, which maintained the lease on the seabed in which the Spiral Jetty was ensconced.  Dia made annual lease payments to the landowner, the State of Utah.  There was no transfer of the intellectual property rights in the work, which presumably remain in the Smithson estate.

In 2002, there was a drought causing the Spiral Jetty to surface.  It was an event heralded in the art and environmentalist worlds.  Over the decades, art and nature had meshed to create a destination site for art and nature lovers.  The Spiral Jetty remained as it was created, although evolved over time as salt encrusted the exposed basalt rock.  It was as Smithson intended.  He would have been pleased with the natural processes affecting the sculpture and the public response. 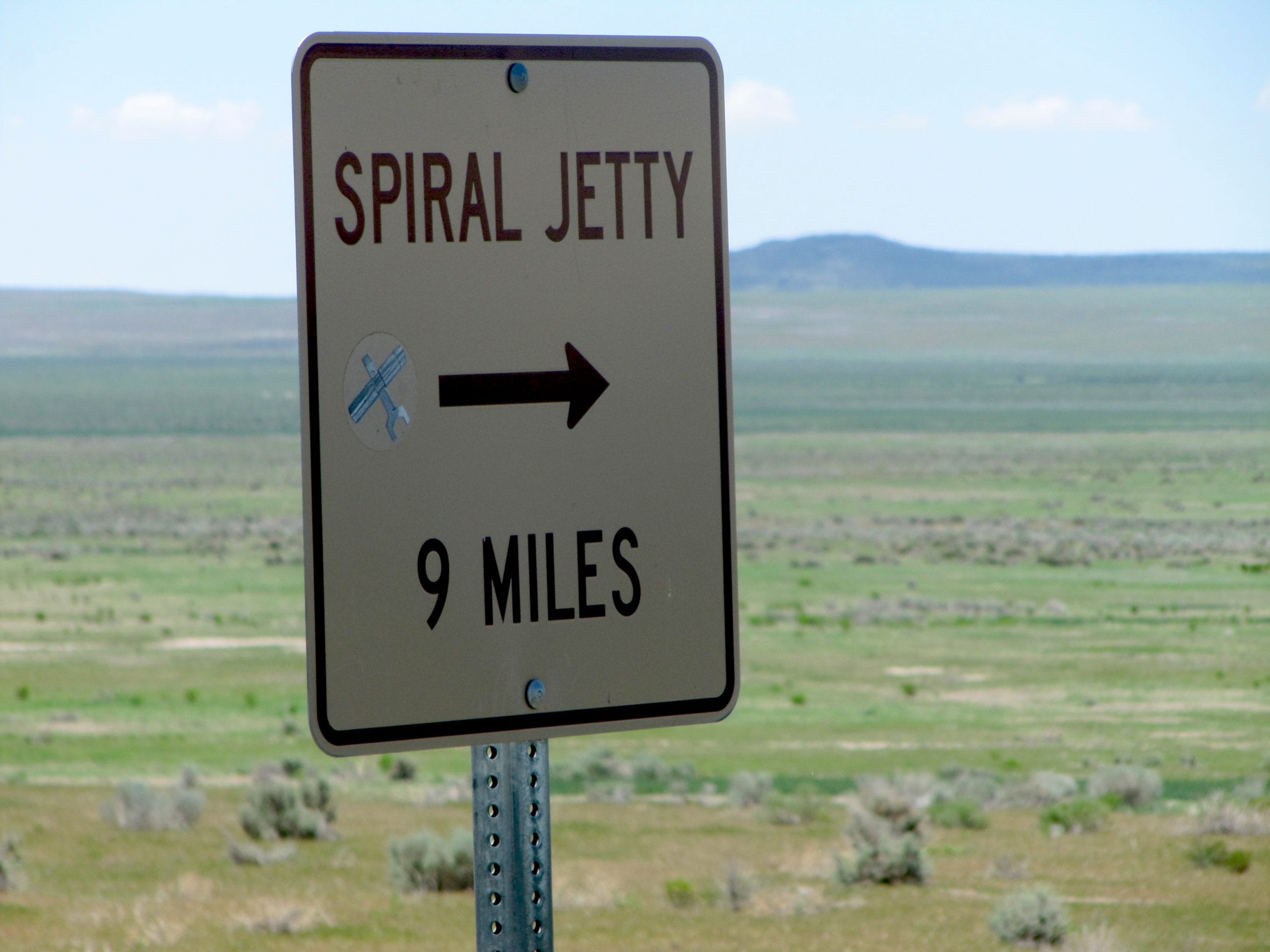 Upon its renewed exposure, art conservators, including the Getty Institute, documented the site.  Environmentalists flooded the state with petitions to protect the Spiral Jetty from the effects of drilling in proximity to the site.  In 2011, Dia defaulted on its lease payments to the state and failed to renew the lease.  Currently, the state of Utah owns the land, under management of the Division of Forestry, Fire and State Lands; there is no land lease; Dia owns the artwork; and the Smithson estate retains the cultural property interest.

In February 2015, the Lawyers’ Committee for Cultural Heritage Preservation (LCCHP) held its sixth annual Cultural Heritage Moot Court Competition, hosted by DePaul Law School in Chicago.  The question put to the law students in their written brief and oral argument competition was the fate of site-specific art, owned by the artist, on land owned by another, in the midst of a building for which expansion was proposed.  The students were faced with a hypothetical case with real-world implications for sculpture such as the Spiral Jetty.  www.lcchp.org.

Standing at the base of the Spiral Jetty in June 2015, it was easy to recall the brilliant arguments forwarded by the law students, who may never have been to Utah.  They would have identified the art image as intellectual property of the estate, although it is in use by the state in official materials.  They would have discussed whether the state had permissive-use authority.  At least the students would have been relieved that no one was selling Spiral Jetty t-shirts.  The students would have understood that the owner of the artwork, Dia, having no ownership interests in the land, had only the power of public opinion with which to protect the work.

Just as moot court problems have no easily identified answer, the fate of the Spiral Jetty will remain as fluid as the lake levels of the Great Salt Lake.  That is unless and until the art is threatened by a man-made event.  As long as only natural forces are at work, as Smithson envisioned, and while the state of Utah regards the Spiral Jetty as a state icon, travelers to northern Utah have two historic gems to enjoy: one a precise moment in time when steam engines joined the United States into a continental nation; and one in which a man achieved his desire to create out-of-museum art, which has over time become melded into a natural visitor attraction. 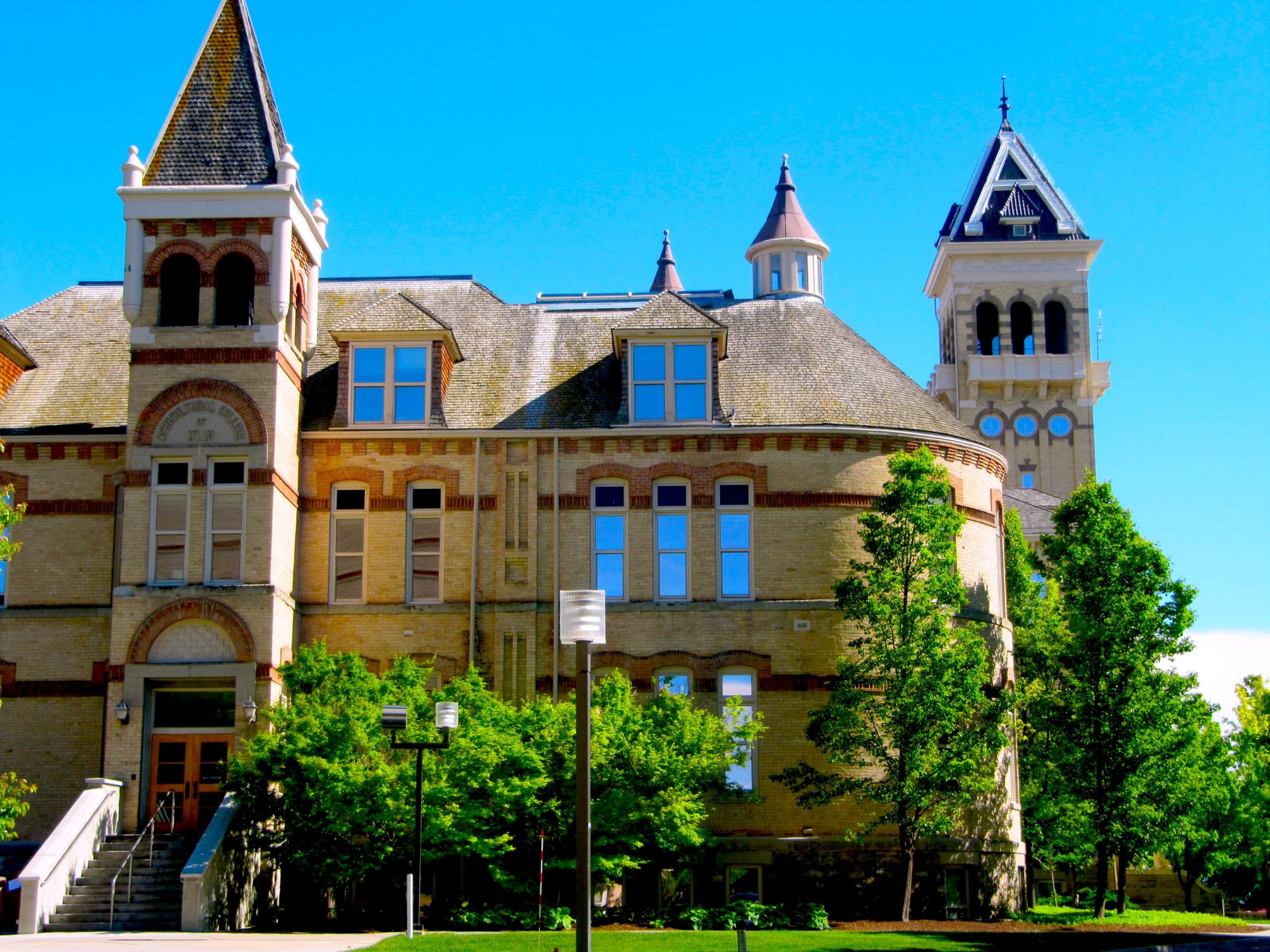 The Golden Spike National Historic Site and the Spiral Jetty are near Brigham City, Utah, an historic city.  Just around the mountain is the university city of Logan, which offers visitors reasons to linger in northern Utah. 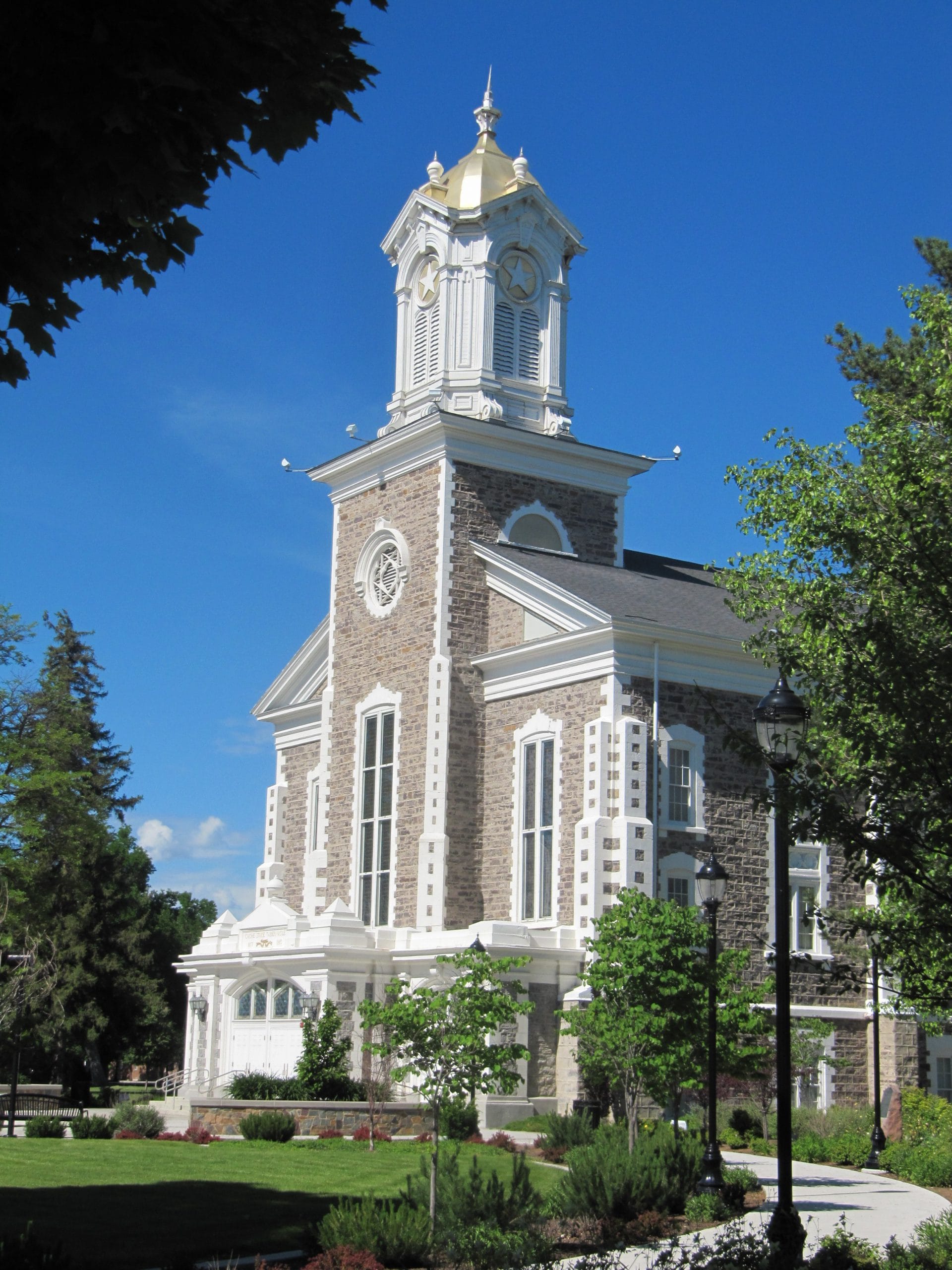 Every weekday at noon there are free concerts in the Tabernacle on Main Street, across from the Ellen Eccles Theater and the Caine Lyric Theatre, which offer summer season performances.  The University Inn and Conference Center hosts the Summer Citizens program, where out-of-state seniors escape hot climates, take over attractive student apartments, and enjoy courses offered in a summer catalogue, as well as discount golf and special events. www.summercitizens.usu.edu. 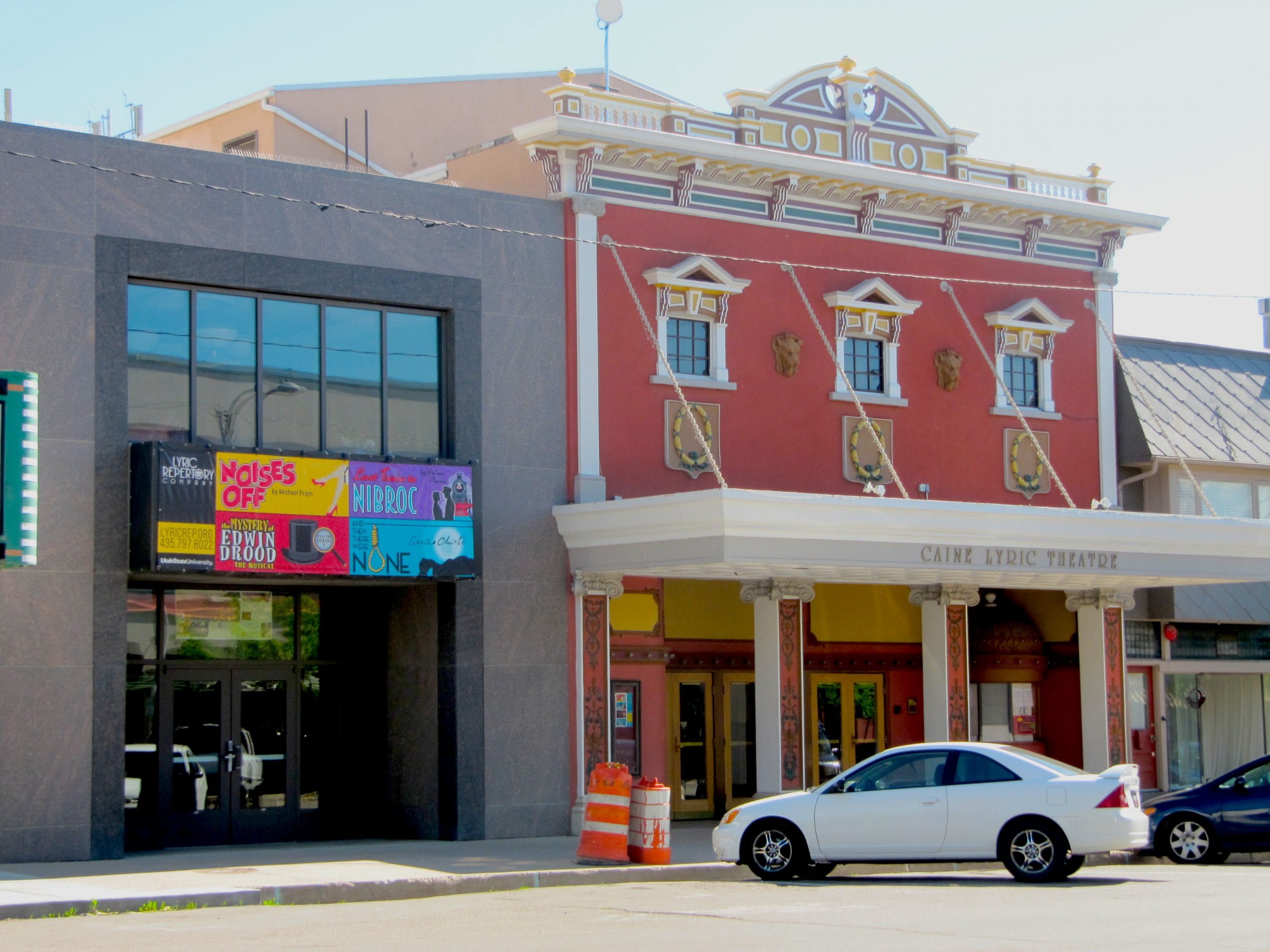 For lodging CTH recommends The Anniversary Inn, with its 33 themed suites, including: the two-story Taj Mahal or Juliet’s Balcony; the Amazon Rainforest, with tree-lined massage table; and King Arthur’s Castle.  Sleep in the back of a pick-up truck with a private movie screen in Rich’s Drive-In, or in a boat in the Caribbean Sea Cave.  Rates are: $149-$269, but see the website for specials: www.anniversaryinn.com.

For great meals the locals go to Angies at 690 North Main Street, home of the Kitchen Sink Sundae.  Also in Logan are le Noone’s and Elements fine dining.  In nearby Smithfield enjoy Saturday farm meals at Gibbons Green Gate Farm. www.GGGFarm.com, and bring your own wine for wine-down-Wednesdays to Callaway’s Bistro. www.callawaysbistros.com. 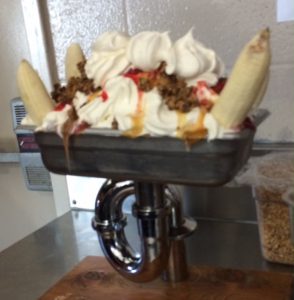