A single historic structure preserved with integrity can revitalize a business district, benefiting the entire community.  In Flagstaff, Arizona entrepreneur restaurateurs teamed with a local artist to bring South San Francisco Street back to life.  The result is three adjoining restaurants: Tourist Home, the Annex, and the Tinderbox Kitchen.

In the 1920s South San Francisco street, which runs from the Santé Fe Railroad tracks south to what is now Northern Arizona University, was a vibrant business district.  The first major national highway system in the United States put Route 66 parallel to the railroad tracks as they went through downtown Flagstaff.  South San Francisco Street held warehouses and modest, but respectable, housing.

In 1926 a Basque sheepherder, Jesus Garcia, built the Tourist Home, run by his mother Isabelle.  Immigrant Basque sheepherders from the area of northern Spain and southern France were welcome to board at the tourist home, when they would not have had a welcome elsewhere in the cattle ranching community.  For fifty years the small rooms of the Tourist Home provided shelter to those of limited means. 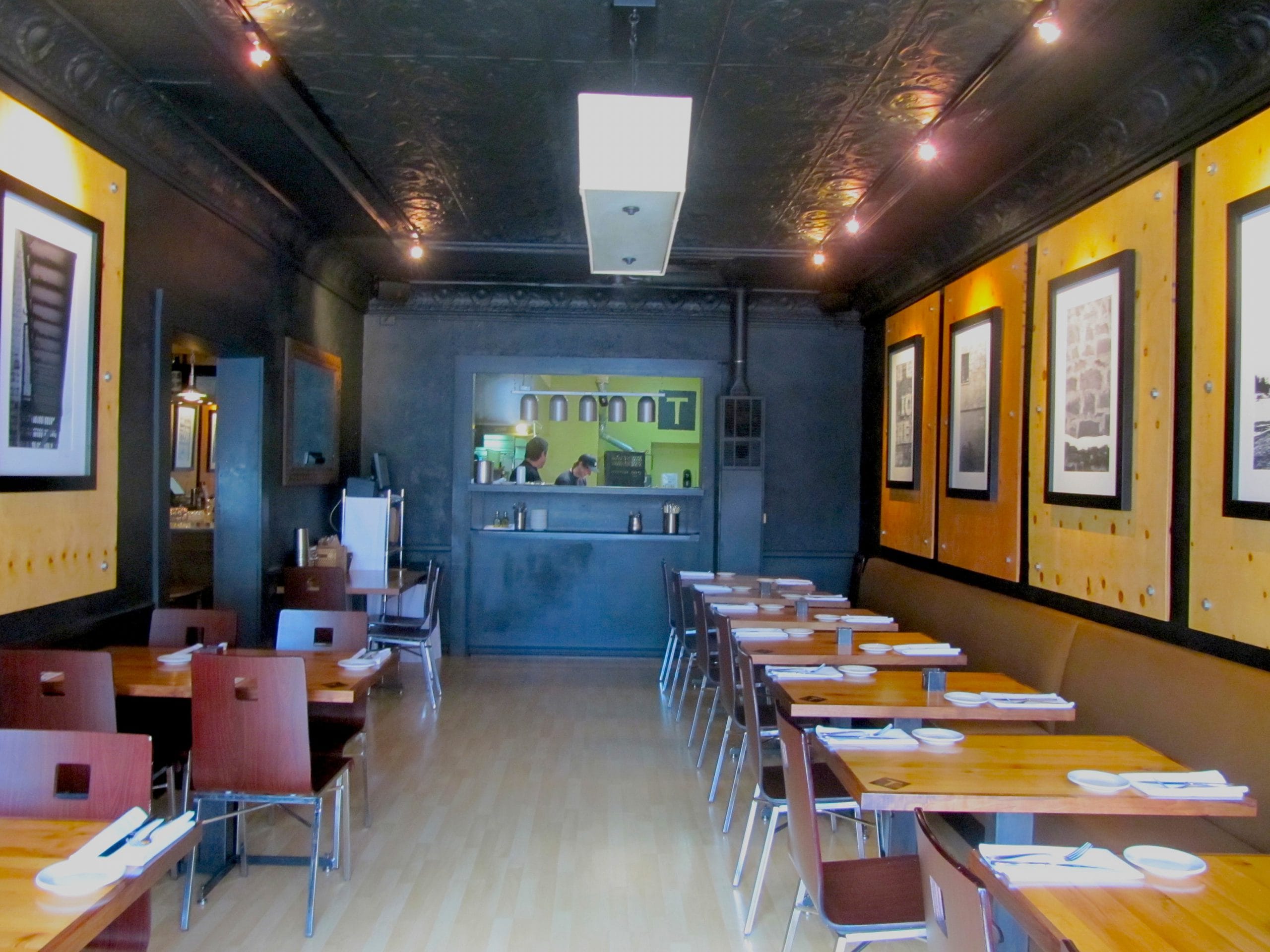 Inside the Tinderbox, original tin ceiling

North of the Tourist Home on San Francisco Street are the Tinderbox Kitchen and the Annex.  Tin ceilings from the last century remain in the Tinderbox.  They date to the time that the dining room was a laundry.  Behind the restaurants and adjoining garden are stucco and stone storage/stable buildings.

The people who lived on South San Francisco Street in the last century do not include notable names.  They were, however, part of the story of the founding and growth of Flagstaff as a commercial center, the largest in northern Arizona.  Preservation of the Tourist Home preserves remembrance of a past way of life.

Forty years ago the Tourist Home closed its doors.  At that time South San Francisco Street was not a place to live, under any circumstances.  The bars and businesses in the area were definitely on the wrong side of the tracks from the respectable residents and businesses of Flagstaff.  Neighboring college students rarely frequented the area, at least not those who told their parents about their activities.  As a business district South San Francisco Street was not the pride of the city.

The Tourist Home remained a derelict shell until cousins Scott and Kevin Heinonen came to South San Francisco Street.  Scott is the experienced and inspired chef and Kevin gave up a legal career, with a stint in Washington, D.C., to devote his full resources to the restaurants and revitalization of the street.  Before they planned menus and opened for business they considered themselves as stewards of the historic buildings. 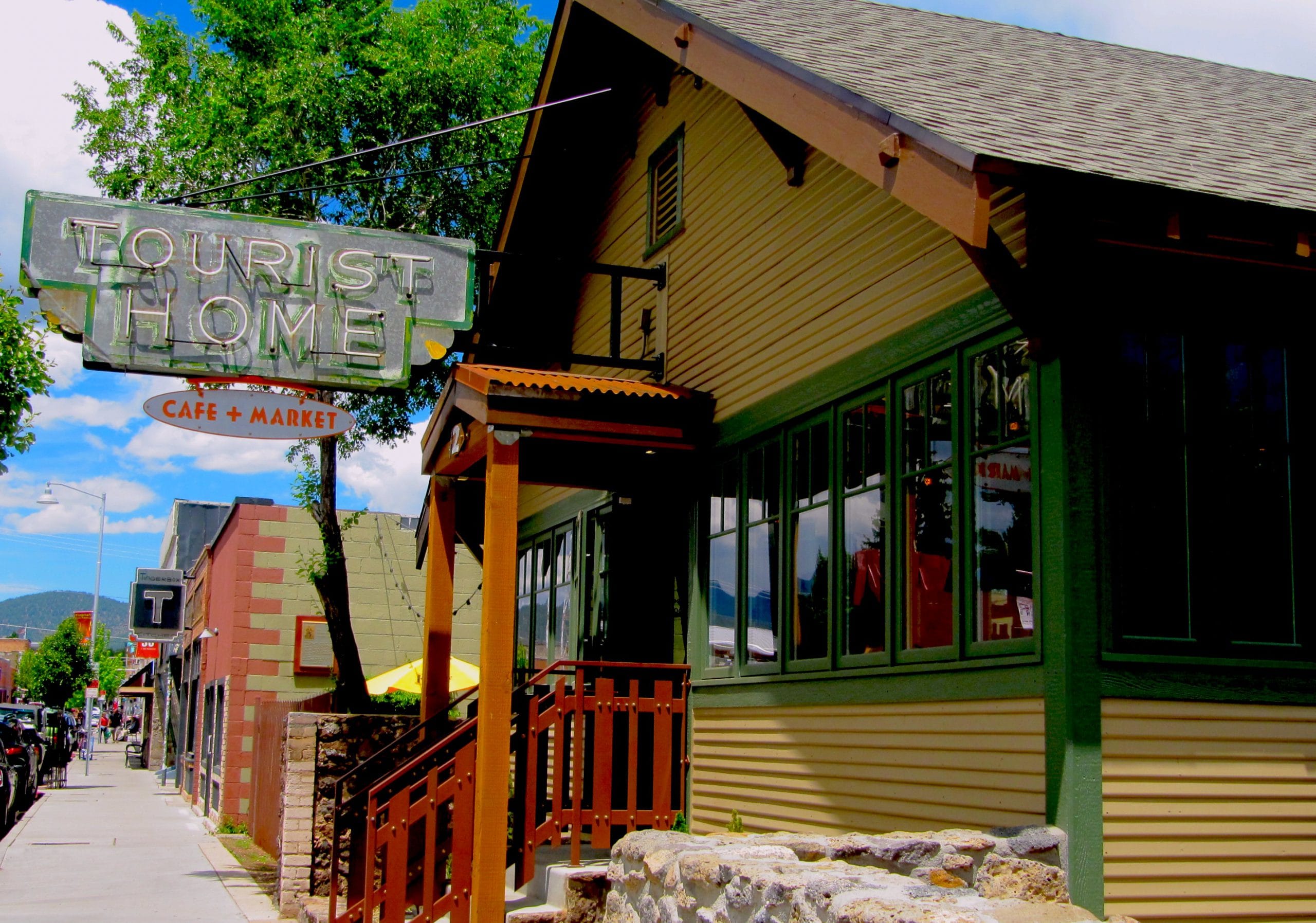 The Tourist Home is a wood and stone structure of a vernacular western style.  Much of the wood was rotted when the Heinonen’s arrived.  They replaced wood siding, milled to the same dimension of the original.  Wooden roof beams needing replacement were replaced with identical inserts.  Using the Secretary’s Standards for Historic Preservation as a mantra, the cousins made every effort to bring the Tourist Home back to life in a new century.  They then carried through on the Annex and Tinderbox Kitchen.  The kitchen equipment is new, the walls and ceiling are original.

When the three dining establishments opened this year they offered South San Francisco Street a casual breakfast, lunch, and market venue in the Tourist Home, a fine dining restaurant in the Tinderbox Kitchen, and a bar and light fare in the Annex.  Between the Annex and the Tourist Home, the garden is used for al fresco dining and special events.  University students flock to the street and bring their parents.  The Heinonen’s venture has inspired more activity on the street.  Flagstaff city leaders can take visitors to South San Francisco Street, a point of pride in revitalization and historic preservation. 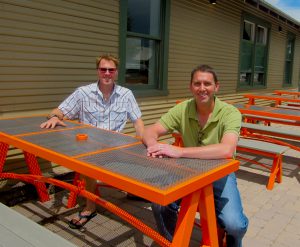 The interior of the three restaurants required major work before they could open.  Kevin Heinonen felt to be successful the interior decoration should be as inventive as the food.  He reached out to Stuart Henderson, a local Flagstaff artist.  Stuart has been turning heavy metal into delicate and substantial sculptural pieces for over 30 years.  He has designed eyewear and buttons for Teva shoes.  In Flagstaff his work decorates private kitchens, and estates, as well as a bike shop. 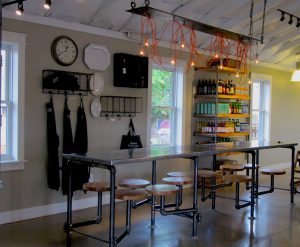 Inside the Tourist Home special table

For the three restaurants Henderson crafted bar and restaurant tables that could adjust to uneven surfaces and hold up to raucous diners.  The CTH favorite is the pipe-work swivel stools for the community breakfast table in the Tourist Home.  For the Annex, Henderson came up with an “A” design incorporated into the table structures and coatrack.  The same “A” appears in the bright orange, metal, patio tables and benches at the Tourist Home.

Henderson and Heinonen have transformed South San Francisco Street in Flagstaff to a destination venue.  The Basque sheepherders would be surprised to see what has become of their old home.  The time and effort put into restoration and revitalization of the Tourist Home is something the city should prize.

The Annex: between with handcrafted cocktails and light meals.