As a frequent cruise traveler for Cruise through History, either as a presenter of port stories on the ships, or as a guest investigating new ports, I am often asked about the best places to cruise.  I often answer with the question, where do you want to go?  The cruise lines offer destinations at their peak season best.  They are also constantly aware of guest safety.  Whereever the ships are sailing there are wonderful options for every interest.

It is not too late to book a cruise vacation in 2016.  Cruise brochures are in the mail for 2017 and 2018, offering the first choice of rooms and itineraries.  Still, there are a few staterooms left on cruise ships for summer and fall 2016 sailings.  Despite the grim news on page one of the newspapers, the travel pages report tourism is strong and the cruise industry is having a great year.  Where will you go in 2016? 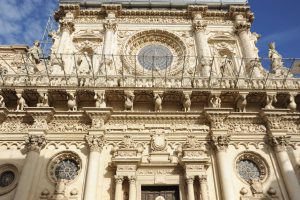 Santa Croce in Lecce from Bari, courtesy of Sherry@cruisethroughhistory.com

The beginning of the cruise season for United States travelers launches from the east coast with crossings to Europe, often called repositioning cruises.  These itineraries offer many days at sea to enjoy the ship amenities, including lounging by the pool to get a jump on a summer tan.  Since crossings are not port intensive, usually offering two or three port stops in a 14-day cruise, they are most reasonably priced.  Book your cruise now for the fall 2016 crossing from Europe to the United States in November and for spring transatlantic crossings in 2017.  The spring 2016 crossings begin in April and have either left the pier or are sold out.

In 2016 and 2017 most of the major cruise lines will launch new ships and position them in locations most in demand.  Those itineraries include more port locations in Asia, the Baltic, and the Adriatic.  Look for itineraries sailing from Seoul, through Japan and Malaysia, across the north of Australia to Sydney.  In the Baltic there are more ships docking in Rostock, Visby, Klaipeda, Riga, and Tallinn.  The Adriatic is made ever more popular with more ships docking in Ravenna and Bari on the west coast, and Koper, Zadar, and Kotor on the east coast.  These storybook destinations are in the itineraries of Azamara Club Cruises and Silver Seas.

With more ships sailing shorter distances across the seas to more ports, cruise lines are offering more overnight extensions in gateway ports to major cities.  The convenience of a cruise ship has achieved the depth of exploration afforded by land travel.  Oceania and Celebrity offer itineraries with two or three nights in port in St. Petersburg so that guests may attend a ballet at the Bolshoi in Moscow and the Mariinsky in St. Petersburg.  The ships arrange to remain longer in port to allow trips to Paris from the English Channel ports and excursions to Berlin from Rostock.

The news from the cruise industry is smiling on all travelers.  Experienced sailors will appreciate the many new itineraries, which add greater depth to explore well- sailed coastlines, such as the addition of La Rochelle and Biarritz to France.  New cruise guests and infrequent sailors have more options to experience exotic ports.

The only purveyors of the cruise industry not having a great year are the cruise discounters.  Even with several new ships launching in 2016, ships rarely leave the pier with empty berths.  Cruise lines offer their best deals on advance bookings.  There are scant empty staterooms to fill at the last minute.

Remember, regardless of where you cruise in 2016, the menus are always in English back on board.  No time is spent hunting for a hotel room.  Nightly entertainment is part of the package, assuming you can stay awake after full days in port.

To learn more about storybook locations such as La Rochelle, Biarritz, Bari, and Ravenna, find Cruise through History, Itinerary I London to Rome and Itinerary II Rome to Venice at Amazon.com.