Rising From Destruction Opens in Rome at the Coliseum October 7, 2016

In a bold assertion that peace must triumph over terrorist attempts to annihilate culture, UNESCO and the Italian Ministry of Culture and Tourism have opened a unique art installation this month: Rising from destruction. Elba, Nimrud, Palmyra.  Organizers chose the heavily attended Roman Coliseum as the venue for the exhibit, adding another level of heightened alert for law enforcement, already ultra-vigilant to ensure protection of the Roman icon and safety of millions of visitors.  The venue and the challenges it brings are part of the statement Italian archaeologists, cultural protection teams, and politicians are making in defying terrorism by perpetuating the life, knowledge, and impact of victimized cultural icons.  The effect is stunning. 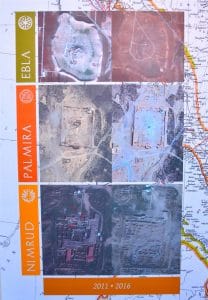 Before and After at Nimrud, Ebla, and Palmyra, CTH photo

Tucked into a portion of the second floor of the Coliseum are full size plaster recreations of the statue of Lamassu, which stood at the Royal Palace at Nimrud; the ceiling of the Temple of Bel at Palmyra; and a room of the Royal Archives at Ebla.  Each is accompanied by photos showing the sites prior to and after destruction by ISIS.  Scientists utilized previously collected data and photos in careful remakes designed to counter terrorism by compromising the terrorist effort to remove all traces of human existence from the tangible landscape and thus all memory.  The exhibit organizers note that heritage is not always preserved in its original form.  By creating pieces true to the original in detail enables continuity of expression and the ability to perpetuate cultural knowledge.

In opening the exhibit on a sunny, cool, October evening in Rome, Irina Bokova, Director-General of UNESCO made the statement that cultural destruction is a war crime.  The theme of the evening, reflected in the statements of Italian officials and artisans responsible for assembling the exhibit, was that the old stones are the embodiment of human culture and their preservation, protection, and at times when necessary recreation, is an ongoing obligation.  The inanimate gives meaning to life. 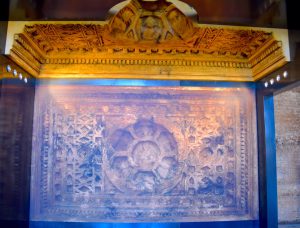 The Italian government is proud to be the host of an artistic undertaking involving cultures at risk in the Near and Far East.  The exhibit displays the scientific and artistic talents of Italian archaeologists and art restorers.  The opening event was an opportunity to give deserved praise to Italian leadership in law enforcement training for Iraqi officers charged with protecting cultural and archaeological property, as well as Italian efforts to stem terrorism by seeking to constrict terrorist access to funds.   Italy supports efforts of the United Nations Office on Drugs and Crime to establish international guidelines against trafficking in cultural property. 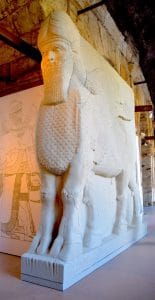 Prominent in comments of opening night celebrants in Rome, was the recent International Criminal Court groundbreaking prosecution of perpetrators of destruction of the mausoleums in Timbuktu.  The action signifies that the international court recognizes that destruction and plundering of historic and archaeological sites is not a victimless crime.  Holding perpetrators accountable is a step toward protection in the same mode of peace evoked by the art exhibit.

On a typical day in October thousands of visitors stream into the Coliseum.  On the day after the exhibit opening a few of them wandered unintentionally into the Rising from Destruction exhibit before realizing that they had happened upon a political, artistic, and cultural statement, that is in essence a peaceful protest demonstration.  Some may have wondered what the towering statue of Lamassu had to do with gladiators and lions, even as they posed for “selfies” in the exhibit.  Whether or not visitors read the posters, or fully comprehended the message, they were there and the artifacts of history were there for them.  With each visitor, the organizers of the exhibit were poking back at terrorists in a peaceful act, rising above terrorism and frustrating its aims. 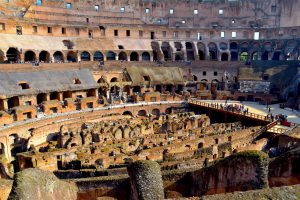 Interior of the Coliseum, CTH photo

To participate in the peaceful protest against terrorism, come to the Coliseum through December 11, 2016 and enter the Rising from destruction. Ebla, Nimrud, Palmyra exhibit at no additional charge once you have entered the Coliseum.

For more on the story of Rome, see Cruise through History, Itinerary I: London to  Rome, available on Amazon.com.