White Nights in Valletta, Malta – Home of the Knights of St. John

Recently we found ourselves with 10 days between ships in Rome and decided to take the hour-long flight to Malta.  Malta is the island at the cross currents of early cultures.  Groups of Phoenicians, Greeks, Romans, Egyptians and Turks each contributed to layers of culture still evident on the this small, peaceful, island group in the south/central Mediterranean.  The cultural mix is evident in the language, which is a mix of Semitic languages, but which uses the Latin alphabet and reads left to right.  It is useless to try to decipher what locals are saying to each other.  Fortunately, the language is not a barrier for visitors.  The long English history in Malta lives on in English street signs and the multilingual inhabitants.

Malta was the home of the last stand of the Knights of St. John, when in 1564 they rebuffed the Turkish Janissaries of Sultan Suleiman, though greatly outnumbered.  The palace of the knights, which still stands on the main square, is now utilized for state functions and houses a well-stocked museum of armaments.  Fort St. Elmo, from which the knights huddled in their effort to defend the last bastion, is now a museum of Malta’s Military History through the ages. 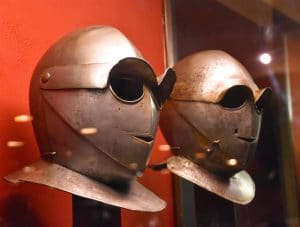 Armaments Museum in the Palace of the Knights, Valletta, CTH Photo

At the close of the 18th century, Napoleon’s navy arrived to take control of Malta.  Napoleon’s admiral Villeneuve, who lost the pivotal sea battle to British Admiral Nelson in the Battle of Trafalgar in 1805, was present in Valletta to cede the Maltese islands to the British.  Later, Britain would peacefully transfer control of independent Malta.

A tragic part of the history of Malta is the repeated sieges of the island due to its strategic place in the Mediterranean.  The German Navy of the 3rd Reich laid siege to Malta from 1939 to 1943.  Although Germany never invaded Malta, the islands were heavily bombed.  Today, restoration of the city walls, forts, and buildings are being, or have been, completed.  Along the ancient arched arcade above the port and on the walls of the former Palace of the Knights, there are tributes and memorials to American, British, and other servicemen who suffered or died in defense of Malta, including a special tribute to the submariners who delivered critical food supplies in their “magic carpets.” 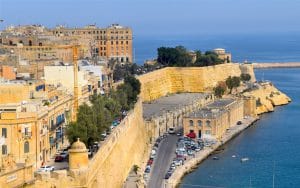 We arrived in Malta on October 1, the night of the festival of the White Night.  We celebrated with 40,000 Maltese, joined by a few tourists.  Island families poured into the walled city of Valletta.  The plazas were transformed into music venues.  The shops stayed open to 11 pm, the museums and government buildings opened to guests for free tours, and restaurants set up extra tables in the narrow streets. 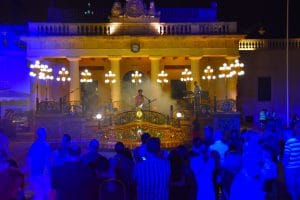 During the festival of music and art, on this cool October evening, the only people standing around looking bored were the police.  Malta is a peaceful place. Having emerged from a long history of battles, the Maltese are pleased to be a peaceful port of commercial ships, cruise vessels, and the fourth largest yacht registry in the world (after Panama, Delaware, and the Cayman Islands). 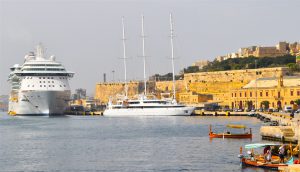 When we came home to our lodging on San Pawl Plaza (correct Maltese spelling), the White Night costume party on the top floor of this 4-story palace was in full throttle.  That was no bother for us. Tired from walking around Valletta’s streets for 8 hours, and after a lovely sidewalk dinner at Restaurant Angelica, we took the little private elevator down to our spacious dungeon apartment, touted to be the former home of the 16th century Grand Master of the Knights of Saint John, Lascaris.  For more than 500 years the stonewalls of our two bedroom apartment, with a little modern kitchen and spacious living area, and modern bathroom, have stood firm and cool. The knights had a reputation for meticulousness and cleanliness.  Our apartment was no exception. 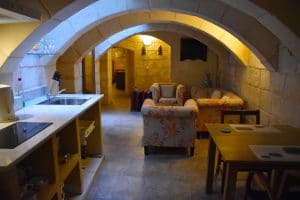 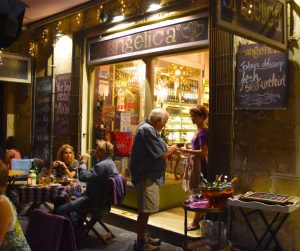 Stay in the Lascaris dungeon at Palazzo San Pawl for $70 a night plus $58 cleaning fee, to be centrally located in Valletta, close to the pedestrian mall, restaurants, the wharf, and Fort Elmo.  Be prepared to furnish all personal amenities, including fresh towels. www.livinginvalletta.com

Cab transport from the airport to hotel was €15.  Cab to the San Pawl beach €15, or take the local bus for €2. Restaurant Angelica, 134 Archbishop Street, entre under  € 20. Also enjoy StrEat Whisky & Bistro on Old Theatre Street.  On St. John Street, the first cross street downhill from the Palazzo San Pawl, enjoy great coffee and pastry in the morning with locals at Dolceria Croce Bonaci.

Some souvenir shops in Valletta offer expensive mementos.  An exception is Louis the owner of Prince Jewellry on Merchant Street, who has been there for 50 years.

Read more about Malta and the Knights of St. John in forthcoming CTH Itinerary III, port of Rhodes, and Itinerary V, port of Valletta.