Hamlet is a fictional character.  Elsinore Castle, depicted as home to the tragic prince of Denmark, is a real place; the Kronborg Castle in the city of Helsingør, Denmark, also known as Elsinore to the English.  The castle was built as a royal residence in the closing years of the 16th century, about 200 years after the time in which Shakespeare’s famous drama was set. 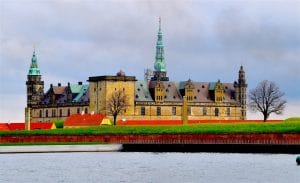 In the glory days as a residence, Kronborg Castle’s guests included a troop of Shakespearean actors, which had come to Elsinore to give a performance.  The Bard was not known to have been among them.  Regardless, Shakespeare was as great a travel writer as he was a playwright.  Many of his plays memorialize places and events far from London.  Informed by his actors, Shakespeare put the next and final version of his long-evolving story into the ideal setting of a medieval castle.  The play was a success with audiences in 1600 and has enjoyed lasting fame in never ending productions around the world.

In centuries prior to the opportune visit of the actors, the medieval city of Elsinore/ Helsingør grew wealthy as an important port, set strategically to control commerce in the Øresund, the gateway to and from Oslo and Copenhagen; the Baltic and Scandinavia.  In the narrows of the channel into Øresund, Helsingør, Denmark, sits to the west and Helsingborg, Sweden to the east.  Sweden and Denmark were often at war.  Helsingør and Helsingborg each had fortress castles.  Their stories are those of competition between monarchs to control trade for four centuries, no less than Hamlet’s father and uncle were competitors for the crown of Denmark in mythical ancient times.

As Shakespeare once said, the play is the thing.  These historic cities and their fortress castles still provide a setting for great theater.  Visitors can enjoy a Shakespearean play in the very venue that inspired the author, or walk the streets where turmoil between Viking tribes, medieval monarchs, and young nations played out over the ages.  We can excuse Shakespeare for putting the fictional character in a place that did not exist in his time.  Visitors are inspired to visit today to enjoy the theater, history, and beauty of the cities that guard entrance to Øresund.

Helsingør sits just 25 miles north of Copenhagen and three miles across the Øresund from Helsingborg, that is 25 minutes by ferry.  Developed much later than its sister across the narrows Helsingborg, Helsingør took control of merchant traffic by the 15th century to become the more prosperous city.

The Kronborg Castle in Elsinore visited by English actors was the work of Danish king Frederik II.  Frederik took the aging Krogen fortress and transformed it into the Danish Renaissance style Kronborg Castle.  Frederik was well traveled through Europe, where he admired Renaissance architecture.  His castle would emulate the popular European style of the late 16th century.

Kronborg was built as a royal residence and protective fortress.  There are secret passages and military casemates.  The castle is surrounded by a moat, entered over a wooden drawbridge.  The 16th century gate remains today as an indication of the weight of the structure. 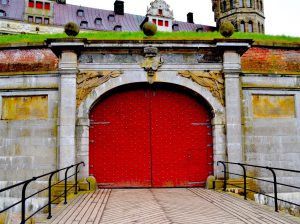 Unfortunately, there was a major fire in Kronborg Castle in 1629.  The castle where Hamlet is performed today was the work of Frederik’s son, Christian IV.  Christian IV is known as the builder king in Denmark for his legacy of castles and fortresses either built or renovated during his reign.

The Great Hall of Kronborg Castle is one of the largest in Europe.  Frederik II commissioned tapestries for the castle, several of which hang there today. The chapel and kings chambers have been restored and are open for visitors.

The final version of Hamlet was written in 1600 or 1601.  It is Shakespeare’s longest play and the one most performed.  It is also one of the most studied and analyzed.  Hamlet will live forever in the castle prison situated in real life on the foundations built by kings who were descendant of Viking warriors, the source of the legend.

Shakespeare died in 1616.  On the bicentennial of his death there was interest around the world in staging performances of his plays.  In Denmark, a country with a long history of enjoying performances in the Royal National Theater of Copenhagen, the amateur players of the military, which controlled Kronborg Castle, were enthusiastic about staging a production of Hamlet in Shakespeare’s chosen venue, despite the small quarters.  The dim light added to the drama.

It was not until 1916 that another performance of Hamlet was staged in Kronborg.  In 1937 title role honors went to Sir Laurence Olivier.  Since then, the performances have been a recurring event. Hamlets have included: John Gielgud in 1939, Richard Burton in 1954, and Kenneth Brannagh in 1988.  Vivian Leigh was Ophelia to Lawrence Olivier and Claire Bloom to Richard Burton.  A film was made of the performance in 1910.

For 2016 event planners were sent into double overdrive to celebrate the 400th year since the death of the Bard and 200 years since the first performance of Hamlet at Kronborg.  The Globe Theatre took the lead to mount performances in April, to coincide with April 23, Shakespeare’s birthday. For August 2016, a three week, multi-medium festival is intended to bring world travelers to Helsingør. 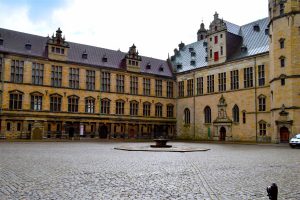 Today cruise ships head to port in Helsingborg, Sweden at the large commercial harbor.  Guests can explore historic Helsingborg, with the remains of Karnan Castle near the modern dockside cultural center then take the short ferry ride to Helsingør, Denmark.  In Kronborg Castle this summer there will be performances of Hamlet in the same courtyard where Shakespeare’s actors performed in 1616 and where Hamlet was performed in 1816.

For more on the story of Hamlet in Helsingborg and Helsingør, see Cruise through History, Itinerary XI Ports of the Baltic Sea coming in early 2017.  Other CTH itineraries are available at amazon.com/cruisethroughhistory.