Warnemünde: Beaches of the Changing Tides

Over more than 800 years the beaches of Warnemünde on the Baltic coast of Germany have been witness to major changes in the tides of history.  It was on these beaches that the darkness of medieval society opened to international trade of the Hanseatic League in the 13th century.  In the 20th century a divided Germany relied upon Warnemünde as the East German access to the Baltic.  Today, German and foreign tourists come from the train depot to enjoy the beach and harbor walk on a warm and sunny day. 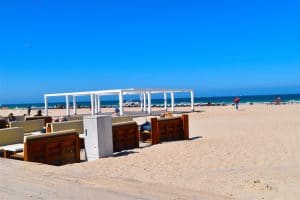 In the northern German towns along the Baltic Sea the glacial grip of medieval life melted away centuries before the Renaissance arrived in Europe.  As petty dukes and princes of Mecklenburg, in the northern German province of the 12th century, competed among themselves, democratic concepts were being nurtured in the market centers of Cologne and the ports that gave inland German cities access to the sea, notably Lübeck and Rostock, which grew to include the port of Warnemünde.  Secure in the inertia of tradition, nobles were caught by surprise when shipbuilders, sailors, and small merchants asserted their independence by participating in agreements to foster trade in their self-interest.

What began as practical arrangement to carry forward a small market economy, in the absence of the omnipresent control of overlords, evolved into an international guild of seamen, merchants, and diplomats.  At its height the guild was a voluntary association of 170 cities.   Cities asserted home-rule with elected councils, the councils sent envoys to the guild meetings, and the guild negotiated favorable trade treaties in the 13th century with world powers of the time such as England.

In 1356 the guild convened and gave itself a name, the Hanseatic League.  League members pledged mutual support and defense.  Instead of war to resolve internal differences they used consensus and compromise agreements.  Rather than empty shops, mills, and industrial centers to provide soldiers to demanding nobles to engage in warfare, they gave funds to purchase armies.  The League hired their own armed forces to protect their interests.

The Hanseatic League effectively held a trade monopoly on the Baltic Sea for centuries.  Coincidental to the rise of the League was the demise of feudalism.  In the 15th century the Renaissance in art would arrive in Italy.  In the 13th century the Renaissance in a world economy, self-determination, and democratic government began in northern Germany.  In the 15th century German nobles would reassert their control, although they could never put medieval life back into practice. 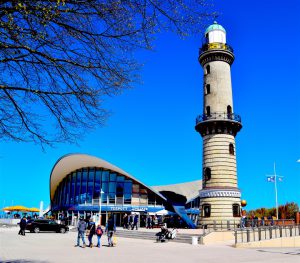 Benefits of membership in the League included armed defense against pirates and encroaching nobles.  Lighthouses were built by the League to assist League ships in reaching safe harbor in League towns such as Rostock and its port at Warnemünde.  Of substantial benefit to merchants were the favorable trade agreements negotiated between envoys of the League and powerful kings of emerging nations.  The League built ships and opened new markets.

The Hanseatic League colonized new towns to increase goods available for markets and to add to their growing membership of safe haven ports.  At its height there were 170 Hanseatic League towns.  The League fostered development of Reval, which became Tallinn, and Riga.  One of the towns rebuilt from ashes was the former Slav settlement of Rostock.  Rostock was given commissions to build ships.

Although the Hanseatic League became defunct in the 18th century, its legacy is still visible and important in the daily lives of former Hansa cities.  The concept of rule by city council owes its popularity to the League.  Decision-making by consensus and compromise is still preferable to war to resolve differences.  The use of envoys to negotiate favorable trade agreements on behalf of cities and countries remains today as an effective means to create a prosperous economy. 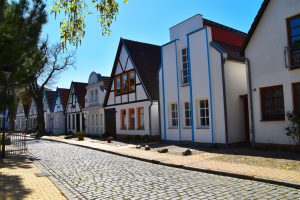 During post-World War II Germany, Rostock was the only major Baltic port in East Germany.  Its economy improved and its population grew.  With the unification of Germany, Rostock fell in stature and its economy, and that of its port district of Warnemünde, began to lag. 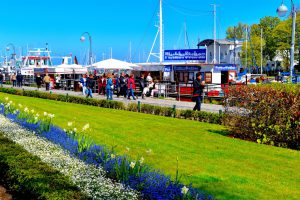 Read all the stories in the Cruise through History series, available at amazon.com.