Discovery of the New World in 1492 required the persistence of an explorer with vision, ability, and good financing.  Christopher Columbus sat in the library of his deceased father-in-law in Madeira, where he consumed knowledge of the known world and developed his vision. Having attained tenuous title as a minor noble through the marriage, he would cement his desired social position with a profound discovery.  Since the age of fourteen Columbus had sailed the merchant sea routes of the Genoese, gaining the skills of a seaman and the cartography ability necessary to captain a ship in unchartered seas.  To attain his goals Columbus lacked only a sponsor and financing. 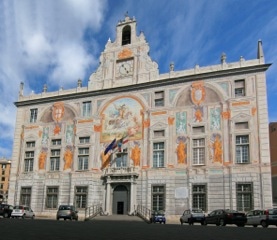 Discovery of the New World in the fifteenth century required a private-government partnership.  Only a royal could sanction an expedition in search of new lands or new trade routes in the name of their kingdom.  Holding land under their flag required the noble to defend the turf, populate the new colony with their subjects, and grant rights to market commodities from the new land.   In exchange, the royal received rents, a percentage of the exports, and first dibs on gold and other rare treats.  The explorer making the discovery could hope to be made a royal governor of the new land, entitling him to a percentage of the rents and exports.  Columbus was persistent in his proposal to the queen of a mostly united Spain, but without his bankers, the venture would not have sailed past the Canary Islands.

Contrary to popular belief, Queen Isabella of Spain did not pawn her jewels to finance the Columbus voyages to the New World.  The jewels had already been pledged to the cost of expelling all non-Catholics from Spain.  Columbus followed the court of King Ferdinand and Queen Isabella around Spain for about seven years, as they addressed their first priority of a unified, Catholic Spain.  By 1492, the royals had reclaimed Cordoba with the south of Spain from the Muslims, and they sent the Jewish population to sea or to prison.

When the royal couple was ready to entertain the Columbus proposal, they found that they had eliminated the Spanish financially productive population of architects, artists, scientists, manufacturers, and entrepreneurs.  The royals were interested in locating a new route to markets in India, conquering new land, and finding sources of gold, but they were strapped for cash.   Columbus intrigued Queen Isabella since he promised new wealth.  King Ferdinand was interested in the proposal as Columbus was willing to work cheap.  The crown would authorize an expedition of just three small ships.  The royals would not advance the costs of the voyage.

The discovery of the New World was financed in much the same way as major exploration and discovery is financed today, through taxation of the public and bank financing. The royal couple sought loans to the crown and investors willing to speculate.  The loans were secured by expected future plunder in the new world, sales of licenses for trade to new ports, and gold discovery.  Interest and interim payments on the loans would come from taxes, in this case, taxes on the already overtaxed and under-producing area of Extremadura in western Spain.

By the fifteenth century, a system of deficit financing by governments, using bank loans, was well in place.  A favorite bank of royals throughout Europe and England was the Genoese Bank of St. George.  The bank began in 1407, and was in business until it was closed by Napoleon in 1805.  In 1444 the bank was chartered in Genoa to make government loans.  Bank of St. George director, Benedetto Centurione, chaired the panel on international finance of 1445 to 1447, the final report of which recommended that European trading partners adopt a gold standard.   The model developed by Centurione and the Bank of St. George established international finance standards for the next 500 years.

It was not by chance that Benedetto Centurione chaired the most influential panel on international finance of the century, or of several centuries.  At the time he was head of the house of Centurione, a family centered, investment-financing powerhouse, with a home base of Genoa and branch offices in Tunis, Chios, Bristol, Seville, and Lisbon. The firm representative in Lisbon was Paolo Centurione, who hired the twenty-five year old Christopher Columbus to arrange sugar purchases in Madeira.  As a young teenager, Columbus sailed from Genoa to Chios, where Centurione held warehouses for accumulation of goods for sale throughout the Eastern Mediterranean.  The Seville branch of the family firm financed the third voyage of discovery for Columbus.  The Bank of St. George handled the Columbus family finances into the sixteenth century.

The Centurione family is not as familiar a name as the Medici of Florence.  For a hundred years the Medici was the wealthiest dynasty in Europe.  They funded a part of the Renaissance, until the leaders of democracy in Florence ended family control.  Medici family members mingled and married into crown families of France and Austria, and four Medici clergy were popes in the sixteenth century.   One reason that Amerigo Vespucci was able to upstage Columbus in giving his name to the new continent was that Vespucci was an employee of the Medici, and the Florence contingent was in competition with Genoa.   The Genoese family firm of Centurione was dispersed, discreet, and quietly handling finances for governments, cities, and the church.  Several Centurione were trustees of the Bank of St. George.

Accumulating Centurione family wealth greater than the sovereigns of several nations was a multi-generational effort.  Genoese merchants were involved in trade going through Constantinople by 1187.  In 1284 Genoa defeated Pisa gaining control of grain sales in the Mediterranean.  Genoese family groups controlled the iron ore market in Elba and ancient Greek alum mines.  Centurion Zaccaria was a noble in Chios in the 1340s, when it came under the control of Genoa. Thereafter the commodities market was controlled from Genoa to Chios by a consortium of three Genoese families, Centurione, DiNegro, and Spinola.

When the Ottoman Turks came from the east to control Constantinople in 1453, they disrupted the commodities markets of Genoa and threatened assets of the Bank of St. George.  The bank directors turned their attention to the possibility of a route to India by sailing west across the unchartered Atlantic.  The kings of England and Portugal sent explorers west by sea unsuccessfully for almost a decade, while Columbus went from the royals of Portugal to Spain, and sent a proposal to the king of England touting his vision of a voyage of discovery.  The impoverished Columbus was on his way to France on a donkey, when an envoy from the Spanish court invited him to return.  The Spanish royals gave Columbus a vote of confidence and the Bank of St. George eventually financed the voyages of Columbus that opened the Atlantic to trade.

The Columbus gamble became a Centurione selling point.  Paul Centurione was employed in 1520 by the King of Russia to develop trade between Russia and the East Indies.  In 1527, the Centurione agent in Bristol, England, Robert Thorne, obtained a promise from the English king to join the firm in supporting a passage to the East by sailing to the West.   John and Sebastian Cabot went on to sail to North America for England in an effort to outdo Columbus.

Watch this website for the cruise calendar of shipboard presentations and travel with Cruise through History in the coming year on a trip to Genoa, the home of the original Bank of St. George, and to the sites of Saint Virginia Centurione Bracelli, as well as the Shroud of Turin in neighboring Turin.  Read more about Columbus: Admiral of the Ocean, in the Cruise through History book series, Itinerary V. Alexandria to Agadir: Southern Mediterranean to the Atlantic, port of Madeira.