The Byzantine era has so often been portrayed as the Dark Ages that the understanding of history for so many people runs from the fall of the Roman Empire to the Renaissance, as though nothing much happened in the interim.   Actually, many interesting and important events occurred between 300CE, the fall of the Roman Empire, and 1450, approximate time of the Renaissance in Europe and the domination of the Christian east by the sultans of Asia Minor, that we know today as Turkey.  This in-between period in the Christian world is known as the Byzantine era.

The name Byzantine comes from the Turkish city of Byzantium.  Constantine, who was born in Serbia, then part of the Roman Empire, was the great Roman general, who became an emperor of Rome.  He was the first Roman emperor to become a Christian and make it the official religion of the Roman domain, which was considerable.  He established as his capital the city of Byzantium, which he renamed Constantinople.

Another important contribution of Constantine to world history generally, and specifically to this story, is the establishment of dynastic succession.  Instead of a triumvirate of senators or the most powerful general taking the helm at the death of an emperor, leadership would be kept in the family.  The family member ascending to the throne would not need qualifications other than royal birth.  Even daughters could become rulers.  Siblings could be co-emperors.

By the end of the Byzantine era war and plague had decimated populations of once great cities such as Rome and Constantinople.  Both would rise again in the Renaissance.  As most surveys of history run battle to battle, the big news during the in-between time occurred in England, where, in 1066, William the Conqueror was ushering in a new era of political life for England.   In Constantinople there were vicious battles, also deadly, not played out with armies and armor.  They occurred in the palace.  While the Norman, William, was taking England to a new beginning, Constantine’s dynasty was coming to an end in Byzantium.

Perhaps another reason that teachers avoid the Byzantine era in the pre-college curriculum is that young students may not be ready for stories of the palace intrigue of the Byzantines.  The true-life stories of Byzantine rulers have more plot twists than a long-running television soap opera.  They run closer to the flesh of human interaction than to far-away wars and the conquest of new lands.

At the center of this story is the beautiful Byzantine empress Zoë Poledouris.   She was a favorite of her uncle Emperor Basil II.  The Zoë of this story should not be confused with the earlier clan of Basil I, who was emperor in 867 CE, died in a curious hunting accident in 886CE, and left his wife Zoë to rule as the regent for their seven year old son, Constantine VII.  Constantine VII was the father of Zoë’s uncle Basil II and Zoë’s father, Constantine VIII.

Uncle Basil II was so enthralled with Zoë that she did not marry for the first time until he died, when she was aged 50. Although she preferred the handsome and valiant military commander, Constantine Dalassenos, the court advisors chose a man they could control. They chose her third cousin Romanos III. Romanos was married at the time. While the inconvenient wife was persuaded to renounce the marriage and enter a convent, Zoë was free to tryst with Dalassenos in the darkpassages of the walls of Istanbul. The marriage of Zoë and Romanos lasted six years.Palace gossips believed Romanos was poisoned by one of the co-empresses. 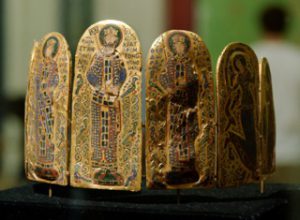 Monomachos Crown (Constantine IX) photo by Yelkrokoyade (2011)
in the Hungarian National Museum. Under use terms of the Creative Commons.

The day Romanos died Zoë married the young, handsome, illiterate palace servant Michael.  Once crowned emperor, Michael ignored Zoë, as he preferred serving girls closer to his age.  Michael felt threatened by Constantine Dalassenos, so he imprisoned the aging general in a cell in city walls.  Proximity of the imprisoned lover to the palace made visits convenient for Zoë.

The stress of leadership so burdened Michael that he abandoned the palace for a monastery.  His nephew tried to send Zoë to a convent and take control.  Her adoring subjects threw rocks at the palace until they saw Zoë return.  Theodora had the nephew blinded and banished.

At age 64, Zoë had little reason to marry for a third time, except to hope for an heir and put distance between her throne and that of Theodora.  The years in prison left

Constantine Dalassenos ill and angry.  He retired to his farm in northern Turkey.   Zoë chose the 42 year-old Constantine Monomachos to become emperor Constantine IX.  The new emperor arrived at the palace with his mistress, the first of several.

Zoë died in 1050 at the age of 72.  During her era no great battles were fought and no great structures were built.  Most histories of Byzantium omit her name.

The Zoë of this story is made immortal, as she appears lost in her thoughts, held in the moment by the gold tile on the wall of the Hagia Sophia.  She may be thinking of her sister and intermittent co-empress, Theodora, whose portrait was never tory illuminates what life was like in this period all too often left dark.  When traveling to Istanbul today, Zoë can be visited at the Hagia Sophia, where the visitor can interpret for himself or herself what may be behind her enigmatic expression.

Read more about Zoë and the palace intrigue of the Byzantines in Cruise Through History, Itinerary III – Eastern Mediterranean, Port of Istanbul, due for release in early 2016, or travel with Cruise through History to Istanbul in 2015 for shipboard presentations.