Travel through Colombia with Simón Bolivar

It is undisputed today that the number one historic hero of Colombia is the Liberator, Simón Bolivar.  Such was not the case in 1828, when he was exiled by his friends for being a president too popular with the people.  Bolivar died in 1830 after being deposed as president and witnessing the dissolution of the six-nation Gran Colombia he liberated from Spain.  Still, the main plaza of the capital of Colombia, Bogotá, is named after this hero, as is the central plaza of many cities throughout the country.  In 1842, the remains of Bolivar were claimed by Caracas, his birthplace.

The name of Simón Bolivar is familiar to many travelers to South America, but not his life story, or the reasons for his acclaim.  Tracing the path of the General from young soldier, to president, to fallen hero, takes the traveler through many sights in Colombia visited by tourists today.  To know the story is to give meaning to those travels.

This is a brief story of the travels of Simón Bolivar through Colombia, as he rose from general to president and then fell from political favor until he died.  The main cities of his life in Colombia were Bogotá, where he ruled as president, Cartagena, where he fled, and Santa Marta, where he died and was initially entombed.

A Brief History of the Liberator of Gran Colombia

Simón Bolivar was born on July 24, 1783, in Caracas, Venezuela. Orphaned at a young age, he became the richest person in Venezuela by inheritance.  Raised by his uncle to be a noble, Bolivar was sent to the court of Spain in 1801 for an education.  The eighteen-year old learned that the Spanish court was a corrupt and inept organization.  The lesson stayed with him as he returned home to find his passion.

In 1808 Napoleon made his brother Joseph Bonaparte king of Spain.  The Spanish colonies of South America refused to acknowledge the new king.  In 1810, there were revolutionary incidents in Bogotá.  In 1811, Venezuela declared its independence.

The first Venezuelan efforts at independence met defeat.  Simón Bolivar found his life’s meaning by leading troops against the Spanish in 1814.  He was defeated and sought refuge in Jamaica and Haiti.  In Haiti, Bolivar befriended its president Petion, who taught the young man valuable lessons in leading a new country.  When Bolivar desperately needed funds for the army, Petion gave financial support to enable Bolivar’s first victory.

In 1819 Bolivar convened an independence congress at Angostura, Venezuela, where a constitution was drafted.  He followed success against the Spanish in his home country before he accomplished an amazing tactical feat when the independence army crossed the Andes during four days in a snowy June, to surprise the Spanish at Boyacá, Colombia.  Several bloody battles ensued, before Venezuela and Colombia were free of Spanish rule.

In 1821 Bolivar became president of the joined nations as Gran Colombia.  The next year Bolivar led the army to liberate Ecuador.  By 1824, Spain had lost its South American colonies.  Gran Colombia was a union of Venezuela, Colombia, Panama, Ecuador, Peru, and north Peru, which honored the Liberator by naming itself Bolivia.

Bolivar was an able general, but a less able statesman.  He proposed emancipation of slaves and workers rights well ahead of such policy acceptance by his vice-president Santander and the congress of Gran Colombia.  Hailed as a god-figure by the people, Bolivar was a threat to his political detractors.  Rumors and bad press resulted in the loss of the election in 1828 and exile for the fallen hero. 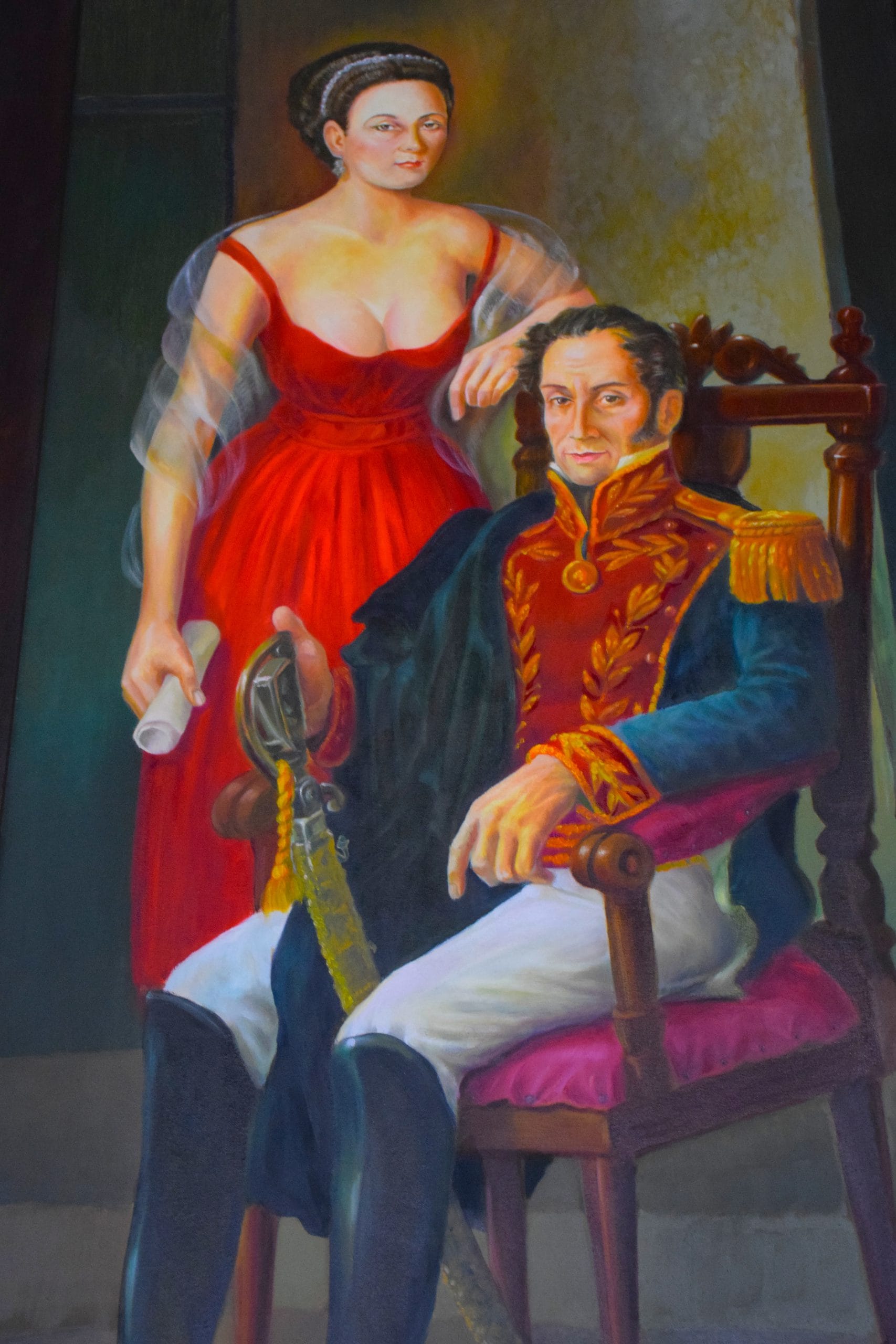 Early in his string of military successes Bolivar met the beautiful, and married, Manuela Sáenz.  She was an outspoken woman who became Bolivar’s muse, mistress, and a point of contention among his leading generals for the influence she held over their president on major decisions.   After Manuela pronounced a death sentence for insubordination by a general who had long served the independence army, several generals left Bolivar for far capitals of Gran Colombia. 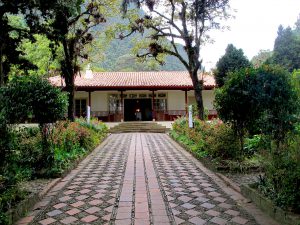 Manuela was with Bolivar at his palace in Bogotá on the evening of a failed assassination attempt.  Her warning enabled his escape.  After Bolivar left Bogotá for exile in Cartagena, Santander exiled Manuela.   She worked in Paita, Peru as an interpreter for the American Consulate until she died in 1856 of diphtheria.

Bolivar had suffered from tuberculosis from his youth.  The stress of military leadership caused his illness to advance and his appearance to show premature aging.  He was uncomfortable in Cartagena, without matters of leadership to distract him from his illness.  A friend suggested the dry air of a ranch outside of Santa Marta as a place of convalescence.

Bolivar spent his final days at La Quinta San Pedro Alejandrino, a short distance from Santa Marta. When he died on December 17, 1830, his body lie in state in the Customs House in the city, now the Santa Marta Gold Museum.  He was buried in a vault in the Santa Marta Cathedral, resituated under the altar, and then removed to Caracas in 1842.

There are places all over Colombia where the accomplishments of Simón Bolivar are brought to life. The battle of Boyacá is remembered in this charming colonial town.  A monument on the grounds of the congressional compound in Bogotá commemorates the pivotal battle at Ayacucho, where the Spanish conceded defeat.

In Bogotá there is the presidential home, now a museum.  Guidebooks indicate that Bolivar did not like Bogotá and did not live there for long.  The home was his residence for four years.  It was the place of refuge until the assassination attempt.  In the garden of the palace are walkways lined with vertebrae.  The visitor can decide whether these are the bones of cattle or the enemies of the Liberator.  Also of note is the monument to President Petion, just outside the main gate.  The first president of an independent Colombia was indebted to the president of Haiti. 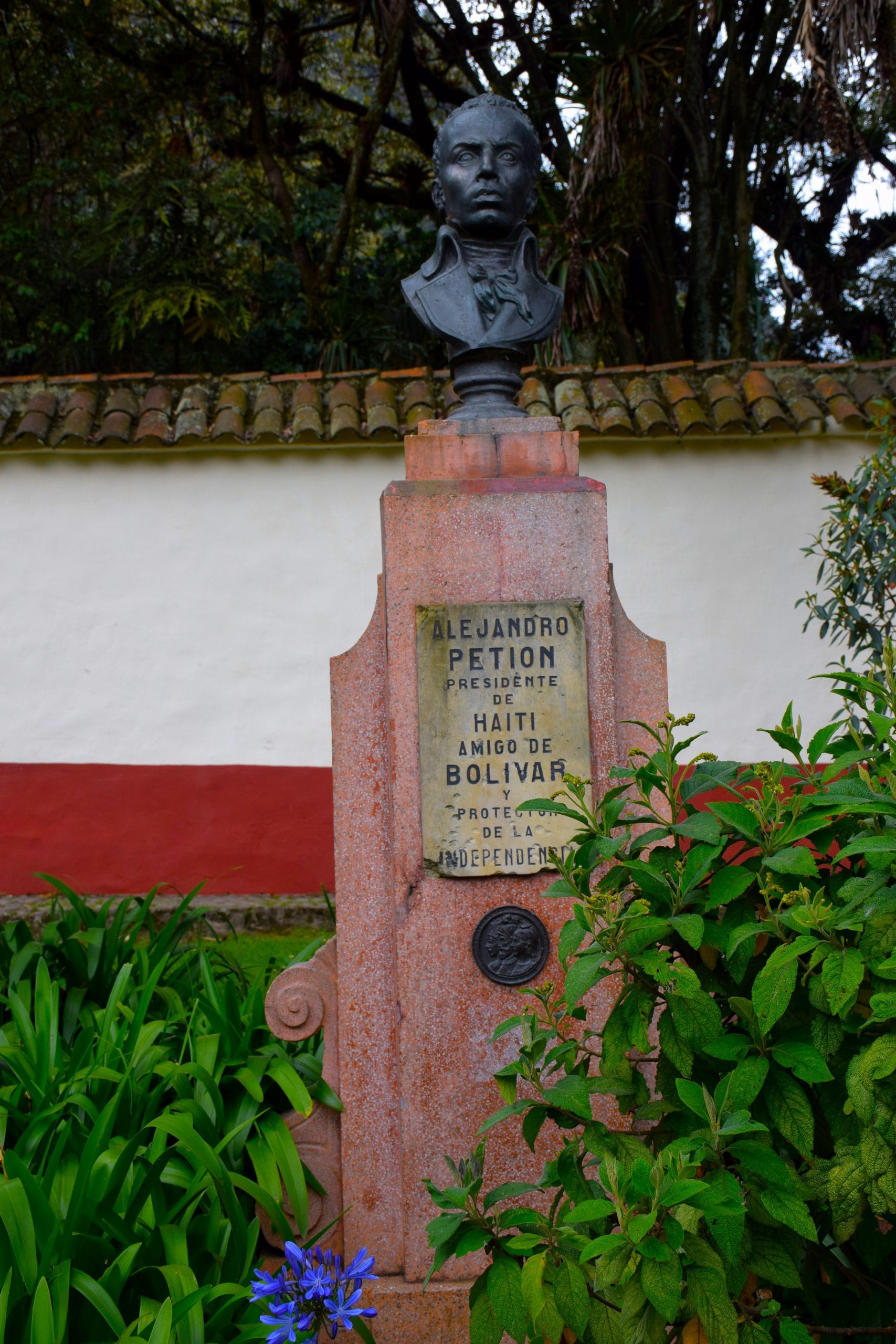 Monument to President Petion of Haiti outside Bolivar Palace Bogota

Manuela Sáenz maintained a home in Bogotá in addition to her room at the presidential palace. That home is now a textile museum open to the public.  For sale at the small gift shop are copies of the surviving love letters of Bolivar and Sáenz. 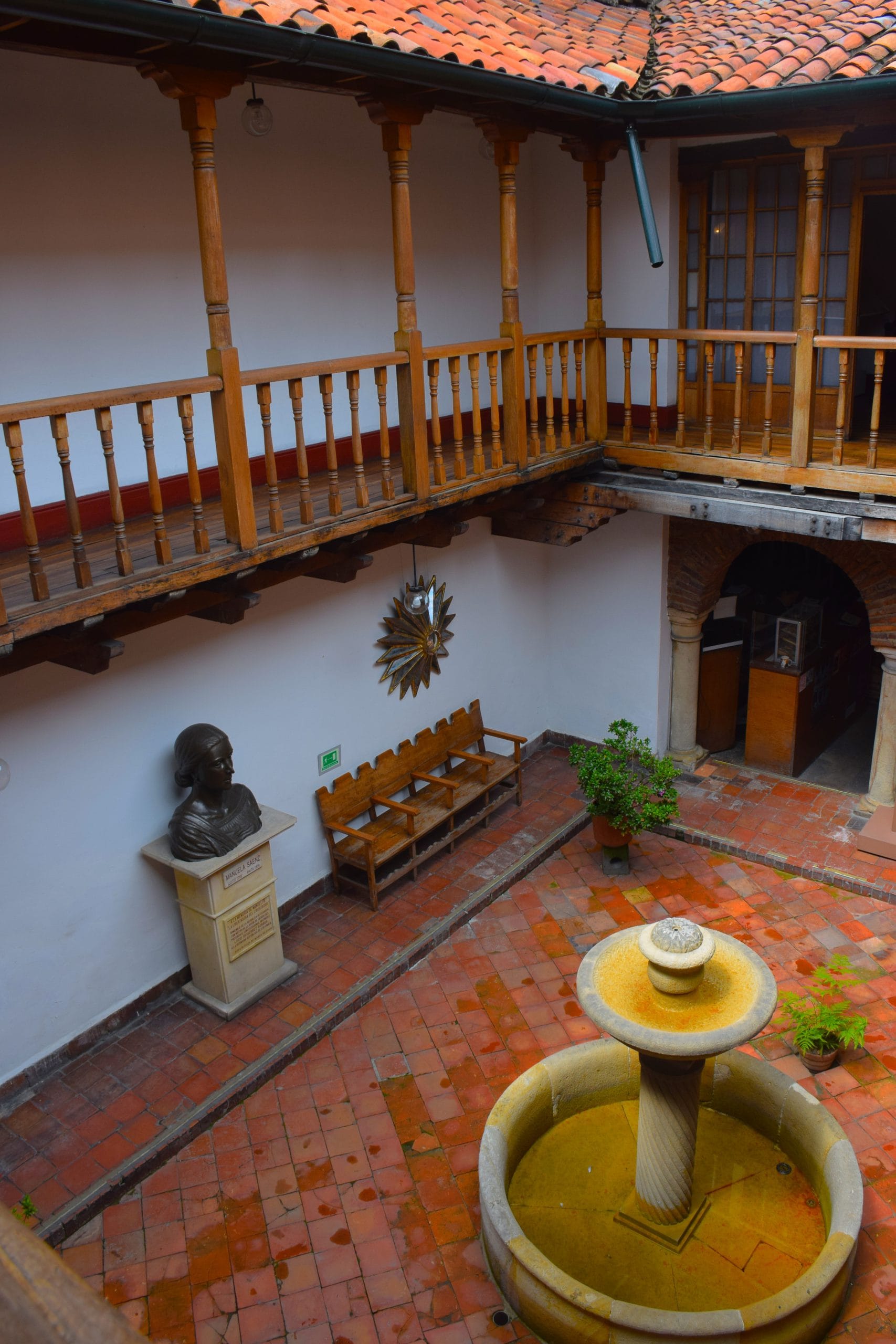 Home of Manuela Saenz in Bogota, now the Textile Museum

Bolivar did not remain for long in Cartagena.  By contrast, the few months he spent on the estate at La Quinta San Pedro Alejandrino have been commemorated with a shrine, a statue, and the preservation of his deathbed in the room where he died.   In the city, the Gold Museum has a prominent place on Plaza Bolivar.  The Santa Marta Cathedral, where Bolivar was first entombed, is on the next square. 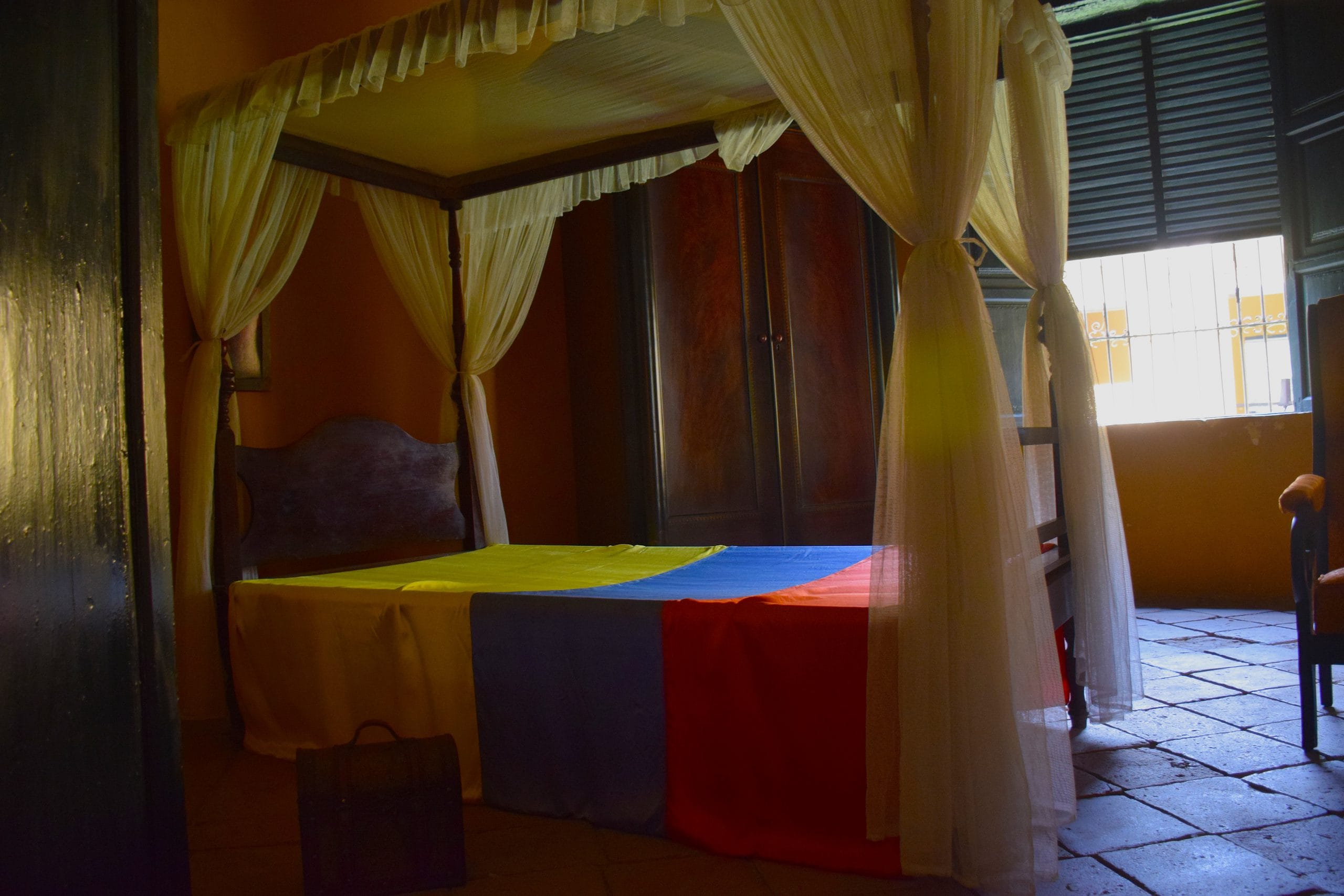 Built in 1799, the Cathedral houses the remains of the city founder at the rear of the church.  The namesake saint is posted on the side of the entrance to a vestibule.  Up front and at the center of the entrance to the altar, is one of several tributes to Simón Bolivar in the church.   Santa Marta residents never questioned their devotion to the first president of Gran Colombia, the Liberator, and their number one historical hero.

Bolivar’s physician, who served at Angostura in Venezuela, and founded the Angostura Bitters Company, is the central character in the story of the Better Bitters, CTH Itinerary VIII, Port of Trinidad and Tobago, released July 2015.