Tumultuous History in the Calm of Boka Bay, Montenegro

Just beyond the southern tip of Croatia, on the east coast of the Adriatic, there is a small inlet, which allows cruise ships to enter a most scenic and idyllic string of four gulfs in Montenegro.  Together the gulfs are known as the Bay of Kotor, so named for the small medieval town at the farthest interior point of the gulfs.  The Venetians, who were frequent visitors in the early 15th century, did not concern themselves with differentiating the four gulfs.  They referred to the entire area as Boka Bay. 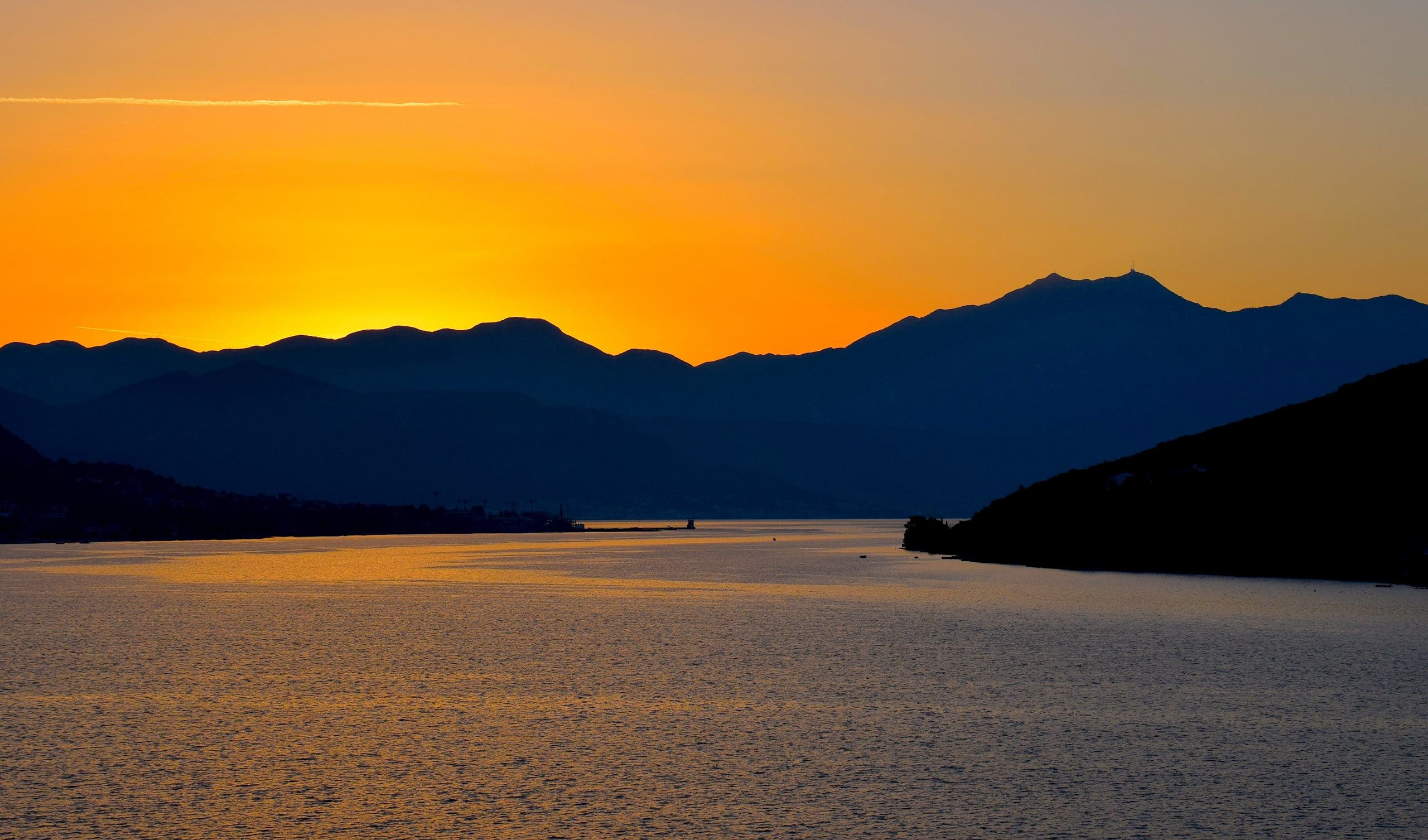 For those travelers familiar with Bocca, Florida, this is the other Boka.  This Boka is green, quiet, and cool.  The large cruise ships glide slowly for the hour transit from entrance to the bay until reaching the docks at Kotor.  The steep mountains on either side of the small gulfs, connected by two narrow passageways, are like fjords.  These mountains are the Karst of the Balkan Mountain range, rising as much as 7,000 feet from the edge of the water.  The ships transverse a submerged river canyon, filled with ocean water at the end of an ice age.

The four gulfs, in order of increasing distance from the Adriatic are: Herceg-Novi, Tivat, Risan, and Kotor.  Small towns of the same name as the gulf anchors each gulf.  At the confluence of the narrow passage to the inner two gulfs is the town of Perast.  The area from Kotor to Perast and the gulfs of Kotor and Risan comprise a World Heritage Natural/Cultural site.  The environment and ecology of the gulfs and mountains, as well as the historic towns are protected by Montenegro as a historic unit.

The town of Perast

For those not familiar with Montenegro, it sits between Croatia, Bosnia and Herzegovina to the north, with Serbia to the northeast, Kosovo to the east, and Albania to the south.  As a whole, the country is 80% Orthodox Christian and 20% Muslim.   In Boka Bay the population is either Catholic or Orthodox.

Montenegro enjoyed periods of independence from its beginnings in the 15th century.  After WW I it became part of Yugoslavia, which in 1929 was the Kingdom Yugoslavia.   In the civil war of 1991-1992, Montenegro was on the side of Serbia as part of the Serbia-Montenegro federation.  Montenegro was established as a fully independent country in 2006.  The popular Montenegrin beach town, Budva, has direct access to the Adriatic.

The towns of Boka Bay are less well known to vacationers from western countries.  There is an airport in Herceg Novi and a two-lane road that winds around the bay through the towns, finally reaching Budva on the coast.  The best way to visit Boka Bay is by cruise ship, gliding in or out of the bay at sunrise or sunset.  It is thrilling to experience the stunning views in partial light.

The five main towns in Boka Bay each have their own points of interest.  Although they sit in an idyllic setting, far from controversies in the world outside of their protective bay, these medieval hamlets have stood on the apex of some of the major battles of the world.  The towns openly display their stories if you know where to look.

From town to town, the majority of residents will vary from Orthodox Christian to Catholic Venetian descendants.  Today the bay is 86% Orthodox Christian and 12% Catholic.  In 1054, when the Great Schism split the Catholic Church into the Roman Catholic and the Eastern Orthodox churches, Boka Bay sat on the fault line of the rift.  To see which Boka Bay town went in which direction, sit on deck as you slowly drift deeper into the bay and count the number of Catholic church steeples or Orthodox church domes in each town.  Churches seem to outnumber palaces and commercial structures where there is so little buildable real estate.

Herceg Novi sits at the entrance to the bay, guarded by Fortress Stari Grad on a hill.  This is the largest town of Boka Bay, the one with the airport, only 35 miles south of Dubrovnik.  It has a population of 35,000.  Herceg Novi began as a Roman fishing village.  By the 1380s it was home to the Bosnian king.

From 1687 to 1798 Herceg Novi was under Venetian control.  In the first decade of the 19th century Austria, Russia, and France, each held it in brief succession.  It was part of the Dalmatian Provinces from 1809 to the First World War, when it came under Italian control.

Today Herceg Novi is a spa town enjoyed by Montenegrins and international guests.  The cultural sites and historic architecture in town is Bosnian, Austrian, Turkish and Serbian.  Of note are lovely beaches and luxury homes on the water.

From the Gulf of Herceg Novi the ship will emerge from a brief constriction in the passage, opening to the Gulf of Tivat.  The town of Tivat will pass by the ship on the starboard (right) side, before heading into the longer, narrow Verige Strait.

Tivat is the youngest of the medieval towns of Boka Bay, although there are Greek and Roman archaeological sites.  Notable are the elegant winter homes of 15th century Venetian merchants.  Today the town has a growing population of 15,000 and an airport, intended to support a recently developed luxury yacht marina.

There is some precedent for the naval preeminence of Tivat.  In the 1850s the Austrian Empire built ships there for its navy.  In 1918 Tivat revolted against the Austrians.  During the Second World War Tivat was controlled by Mussolini.  Look closely at the west side of the Gulf of Tivat to see garage doors at water level, where Hitler hid submarines during the war, for use in the North Africa Campaign.  Today Tivat is home to Porto Montenegro luxury yacht marina.  It has dreams of becoming a second Monaco.

Emerging from the Verige Straight, Perast sits straight ahead, halfway between the Gulf of Risan and the Gulf of Kotor.  The picture postcard perfect town of a few hundred residents sits at the edge of the water with its four-story customs house and 16th century warehouses.  There is no medieval era protective wall.  Instead, Venetians built nine defensive towers in the 15th and 16th centuries. Sixteen palaces and 17 Catholic churches can be seen rising against the mountainside in Perast.

Perast was at its peak as a shipbuilding venue for Venetians in the 17th century.  It was the last place on Boka Bay to surrender Venetian rule to Napoleon in 1797.  The story in Perast is that city leaders put their Venetian flag under a church altar when Napoleon’s troops took the town.  The flag was reinstated to prominence when Napoleon met defeat. 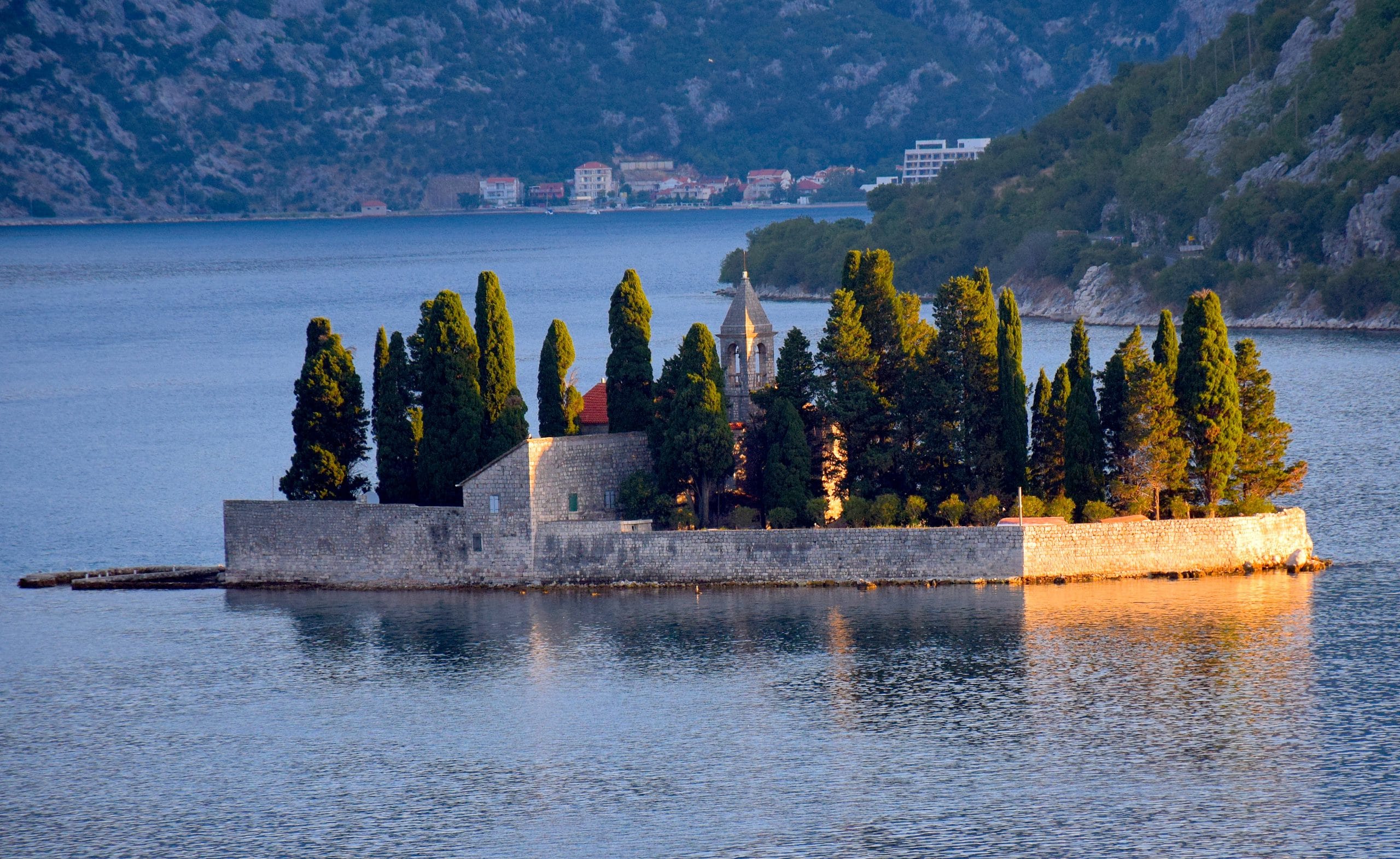 St. George Island with Risan in the background

There are two tiny islands in the gulf just off Perast.  One island is naturally formed; home to a monastery with the 12th century St. George church.  The other island is artificially formed, and supports Our Lady of the Rock.

Our Lady of the Rock came into being after 1452, when a fisherman found an icon of the Holy Mother and Christ on a rock as he was being saved from a shipwreck.  The rescued sailor vowed to build a church on the spot.  From 1630 boats brought boulders to the site, as they still do, creating an island of rocks.  The church has a dome and a small bell tower.  Inside there are donated paintings.  Locals come to the church to leave silver charms for luck and of ill limbs for a blessing of healing.

As the ship turns right at Perast, into the Gulf of Kotor, look around the bend to the left, north of Perast to the town of Risan.  This is the only area in the bay where farming is possible.  In Roman times, 10,000 people lived in Risan in luxury villas.

Risan is protected by high mountains, which did not deter the Ottoman Turks, who held the town in 1482.  The town came late into Venetian control in 1688, too late to enjoy commercial benefits.  Still there are many Venetian Baroque style buildings.  In the 2oth century Risan was a logging town, with a population of 2,000.

Risan claims as its most famous past resident, Queen Teuta, who ruled from 231 to 227 BCE.  In the four years of her reign, the Queen brought wealth to Risan by piracy of the seas.  Most of the booty came from Roman ships traversing the southern Adriatic and the Ionian Sea.  Queen Teuta’s fleet had taken many Greek ships, establishing her as the Terror of the Adriatic.

In 229 BCE Rome declared war on Risan’s Queen.  The Romans sent 200 ships and 20,000 troops to the Balkan Peninsula, then known as Illyria.  By force of numbers Romans conquered each little hamlet and bay until Queen Teuta surrendered. 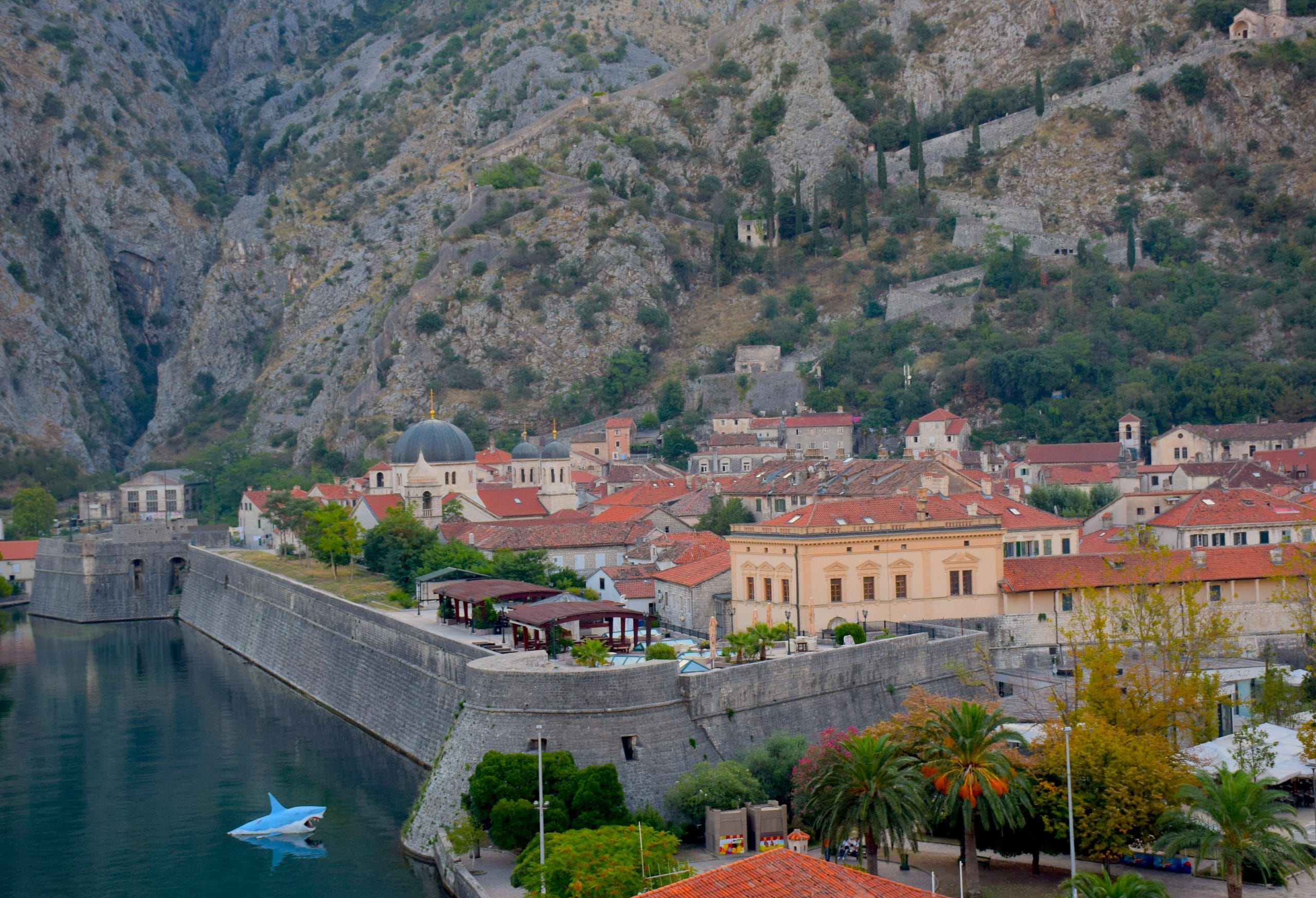 As the cruise ship reaches the farthest point in Boka Bay, Kotor comes into view.  This perfectly protected medieval town still has its town walls built during the Venetian period from 1420 to 1797.  During that time Kotor competed in trade with Dubrovnik.  The walls protected Kotor from pirates, random bands of Bulgars, and withstood the Ottoman Empire incursion attempts in 1538 and 1657.

Like its neighbors, Kotor went through many national overlords from the 19th through the first part of the 20th century.  It settled into the Socialist Republic of Montenegro in 1945.

High on the hill above Kotor is the walled fortress, built during the Byzantine Christian period of the 6th century.  Prior to the town wall, the steep climb was challenge enough for would-be intruders.  Today it is a favorite morning hike for visitors.  Another town icon is the 12th century Cathedral of Saint Tryphon built on church foundations dating to 975.

Whether arriving by cruise ship or at the airport and traversing the bay by local bus on the winding road, Boka Bay remains a serene place to connect with life in small medieval Balkan towns.  Even if Tivat attains its goal of a large luxury yacht marina, the geography of Boka Bay, and the World Heritage Site designation, will contain the more disruptive effects of tourism on a place that is being discovered.  The turbulent times that formed the towns of Boka Bay have come to rest.  All that remains is the beauty of a place that welcomes visitors.