As the weather cools and the days shorten, pumpkins appear in great masses on empty lots and grocery story parking lots.  It is Halloween time.  In schools where any celebration of a religious holiday has been stricken from reference, and in cities where treat-or-treat on a door-to-door basis has been banned for safety reasons, Halloween endures to be a time of fall festivals, pumpkin carving, and stories of ghosts running through cemeteries. 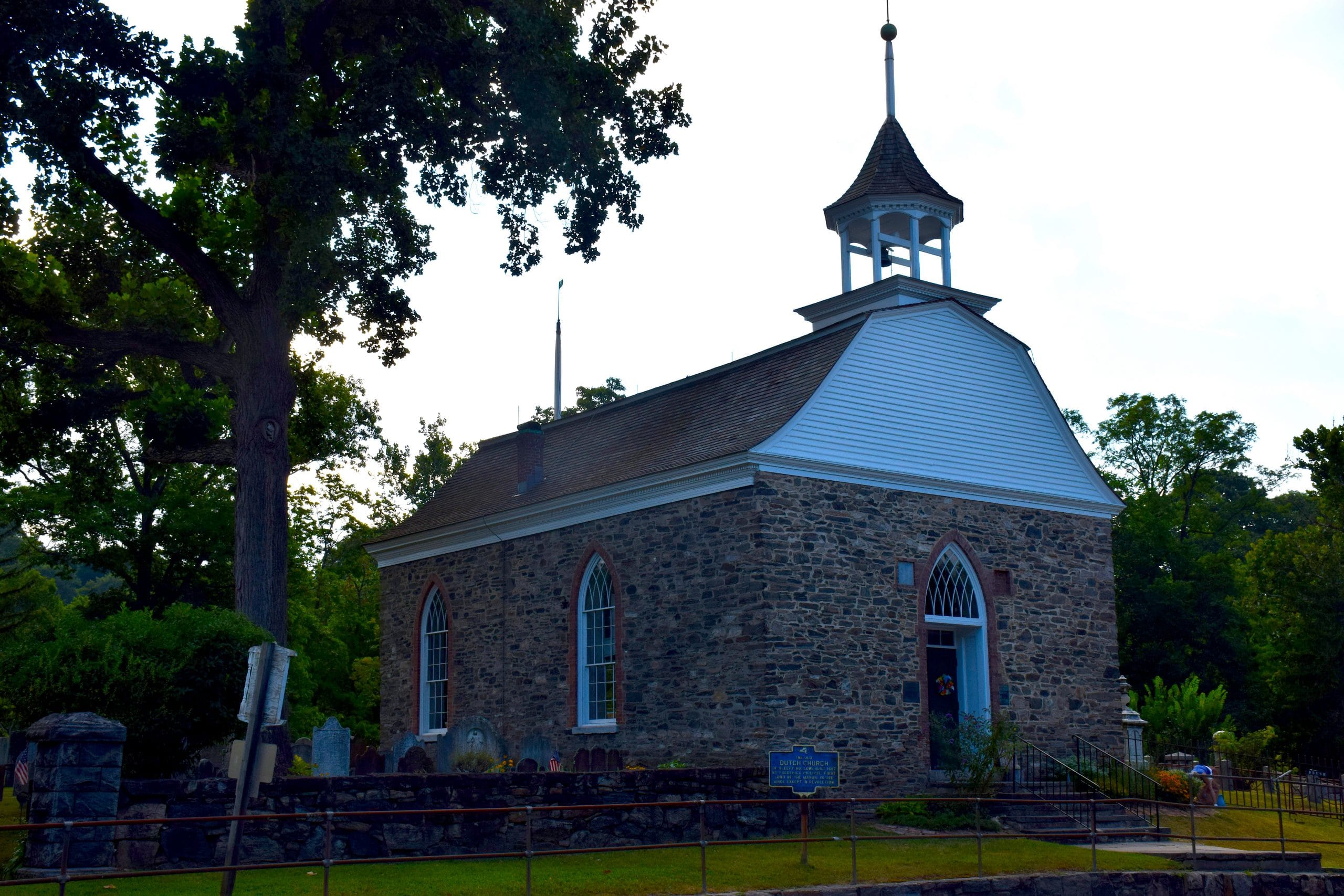 There is no better place to capture the spirit, pun intended, of Halloween than Sleepy Hollow, the little village north of Tarrytown, New York.  In Sleepy Hollow the Old Dutch Church with its Sleepy Hollow Cemetery continues as an active congregation.  The only acknowledgement of the public fascination with the place is a small box at the entrance to the church parking lot, filled with maps of Sleepy Hollow Cemetery.  There are a few directional markers to frequently visited spots.  There are no souvenir stands.  Expect a visit to an authentic place.

The association of Sleepy Hollow with Halloween was the invention of Washington Irving, America’s first literary celebrity.  Irving was born in New York in 1783, the youngest of eleven children.  In 1789 he had the honor of meeting his namesake in Manhattan just after election of the nation’s first president.  Irving delighted in writing fictional histories of the Dutch in New York.  He was also a master of marketing his work.

In 1809, Irving, then a twenty-six year-old lawyer in New York, posted an advertisement in the New York Evening Post, under the guise of an innkeeper, seeking the owner of a diary left in a New York City hotel room.  In order to be compensated for room rental, the landlord threatened to publish the work, a history of New York from the beginning of the world to the arrival of the Dutch.  The name of the lost guest was Knickerbocker.  The book was a humorous and candid commentary on escapades of the elite of the city.  It was an instant success.  For 200 years, New York icons have been dubbed Knickerbocker.

Irving became familiar with the quaint town of Sleepy Hollow when in 1798 he was sent there to stay with family friends while yellow fever spread through Manhattan.  Reflecting on delightful childhood memories, in 1819 Irving published a book of Dutch family stories under the nom de plume of Geoffrey Crayon.  Included in the collection were the stories of Rip Van Winkle, who slept through the American Revolution, and the Legend of Sleepy Hollow. 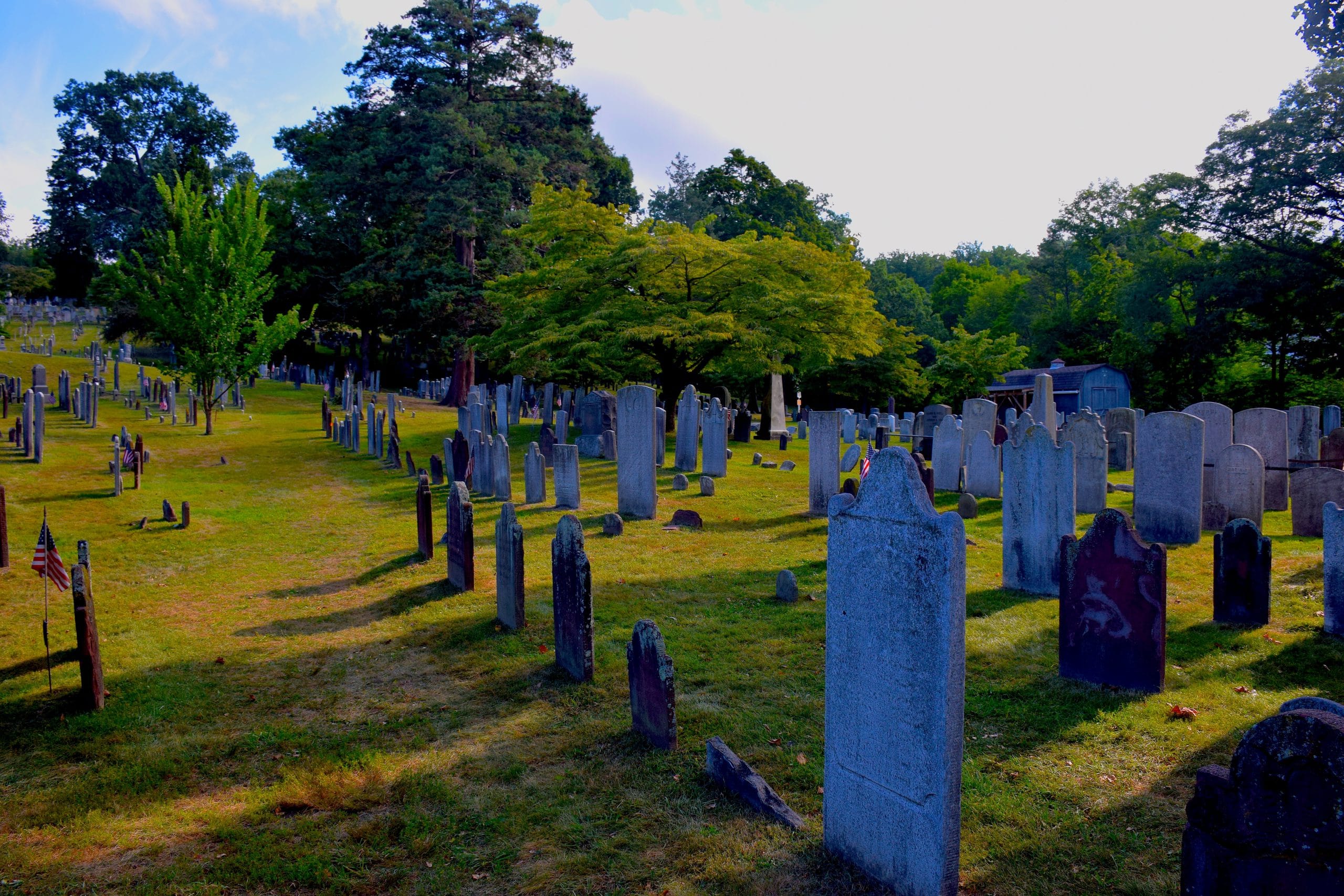 Old Dutch Burying Ground, where Ichabod Crane was chased by the Headless Horseman

Irving set the Legend of Sleepy Hollow in the Dutch settlement of Tarry Town in 1790.   In the story, an idealistic schoolteacher by the name of Ichabod Crane came to Tarry Town to teach English to the Dutch children.  One night, as Crane headed home from a party where stories of ghosts were told, and despondent over his failed attempt to propose to the daughter of a wealthy merchant of the town, his imagination played tricks on him as he passed through Sleepy Hollow.  It is in the Old Dutch Burying Ground that Crane encountered a horseman holding his severed head in his hand.  They raced to cross the bridge.  The horseman hurled his head at Crane.  The next morning there was no trace of the headless horseman or Crane.  The schoolmaster packed up and left town during the night. 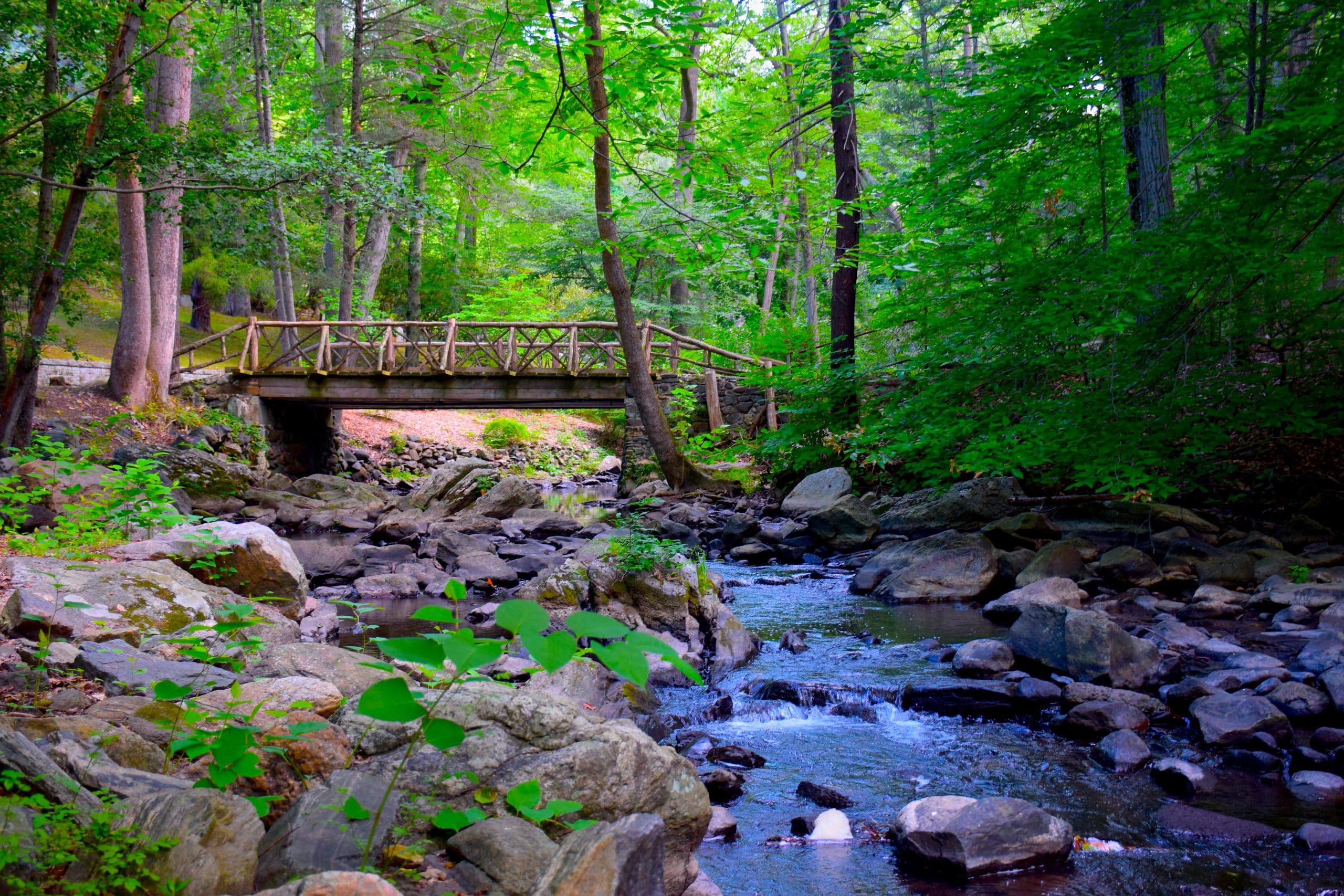 Today the area of the Old Dutch Burying Ground remains, as Irving would have encountered it.  A rebuilt Headless Horseman Bridge is in a lovely setting across the Pocantico River, which joins the historic cemetery to a new extension.  Beyond the Old Dutch Burying Ground is Sleepy Hollow Cemetery with the crowded Irving family plot in which the grave of Washington Irving is clearly marked. 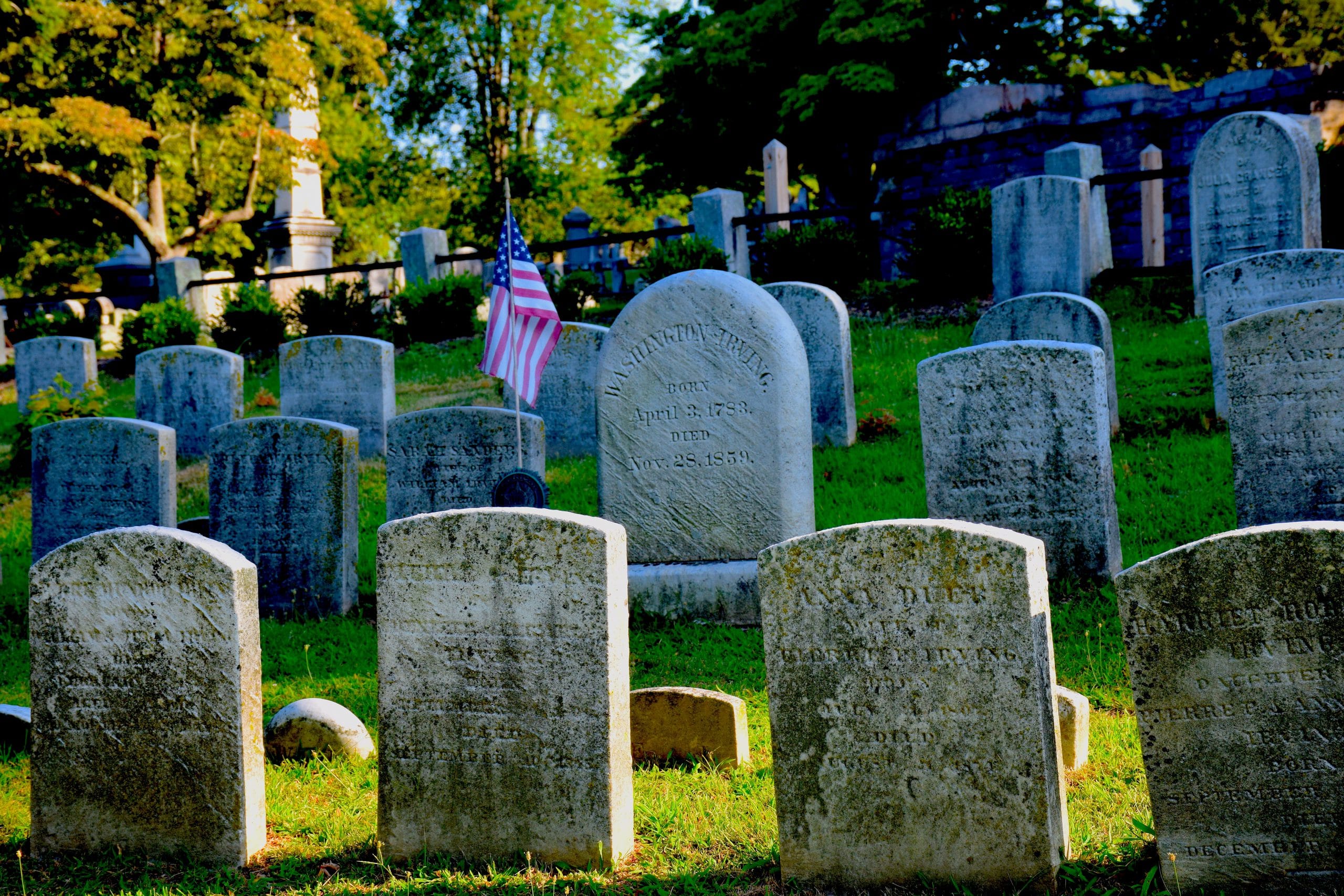 Also in the Sleepy Hollow Cemetery are the graves and elaborate monuments of notable scions of American enterprise.  Samuel Gompers, Andrew Carnegie, and Elizabeth Arden are there.  Sitting high on top of the mound in Rockwood Circle is the family mausoleum of the Rockefellers.  During the fall there are day and evening tours of the cemetery, complete with hair curling commentary. 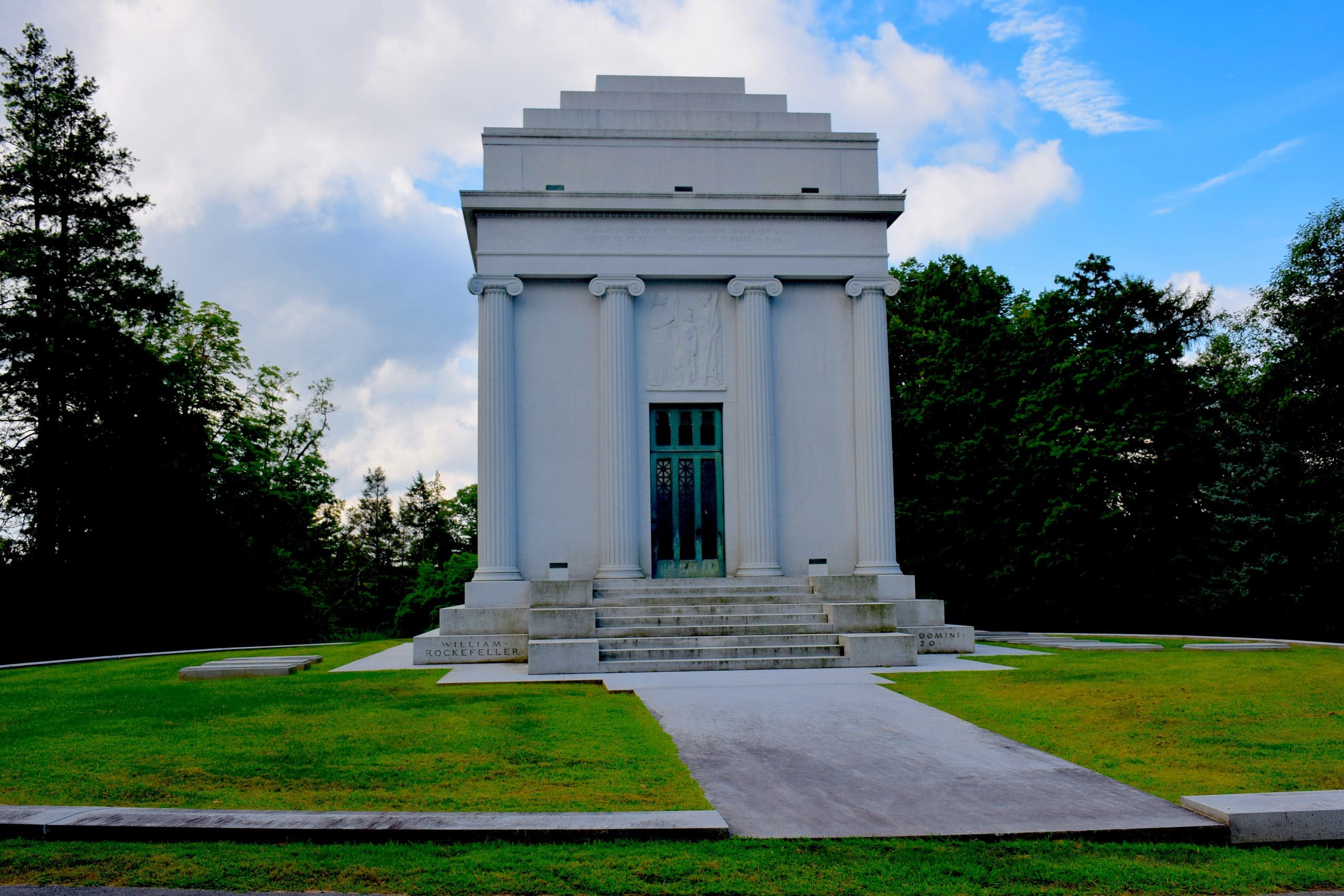 Washington Irving was so comfortable in Tarrytown that he lived there when he returned from Europe and had gained fame in America and Europe.  He purchased a home overlooking the Hudson River named Sunnyside, which looks like a character in one of his stories.  Visitors are welcome at the whimsical estate.  Children sit in the garden and hear Irving’s stories as they have for 200 years. 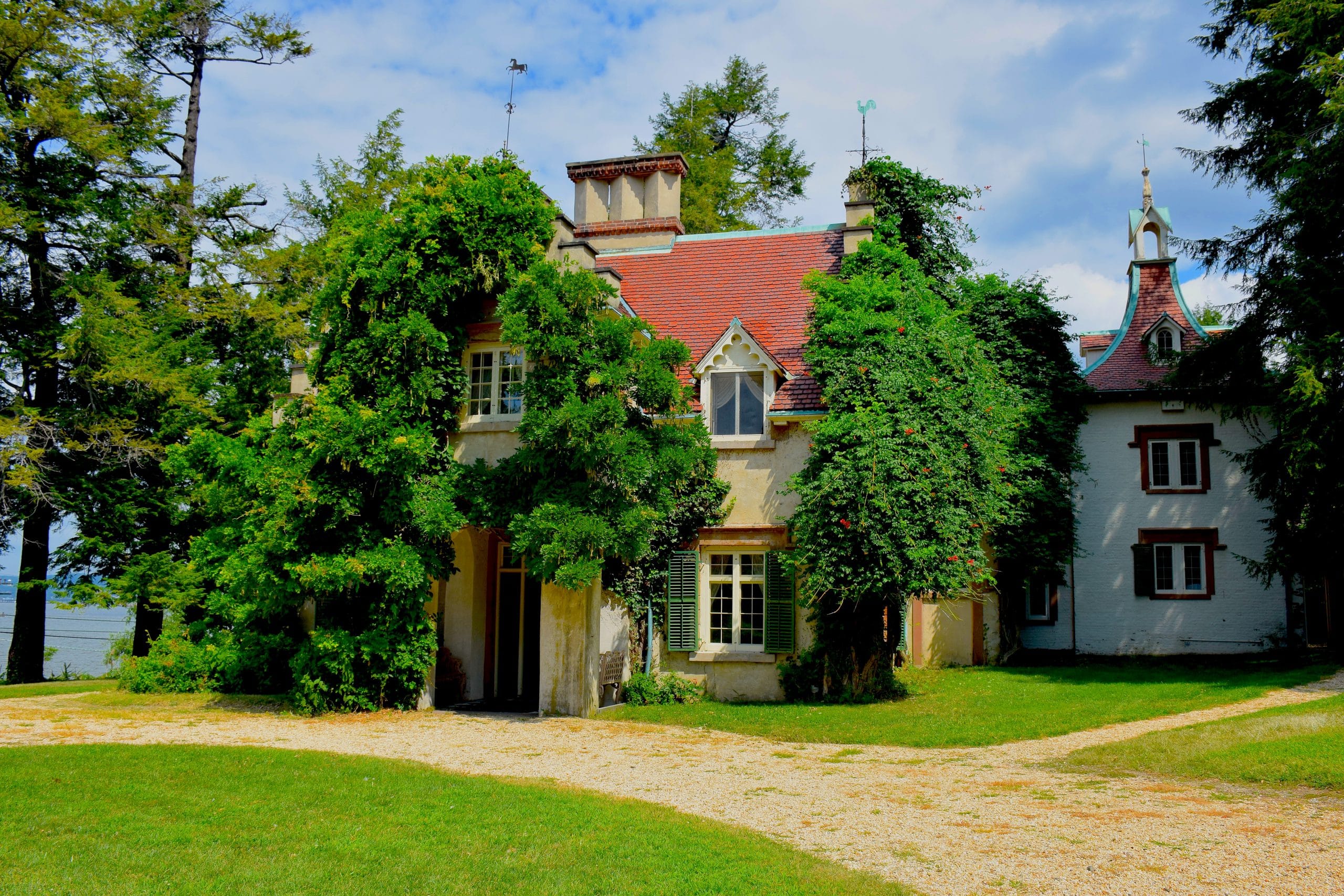 Sunnyside by the Hudson River home of Washington Irving in Tarrytown

Washington Irving made Sleepy Hollow so popular that it grew beyond its quaint Dutch beginnings to become a refuge from New York City for the affluent.  Just down the street from Sunnyside are the Gothic Lyndhurst Castle; the Rockefeller family compound, Kykuit with Philipsburg Manor farm; the gardens and neo-classical architecture of Montgomery Place; and the post-colonial period manor of the Van Cortlandt family.  Across the Hudson are homes of Hudson River Valley artists.  All the sites are open to visitors and have a calendar of special events. 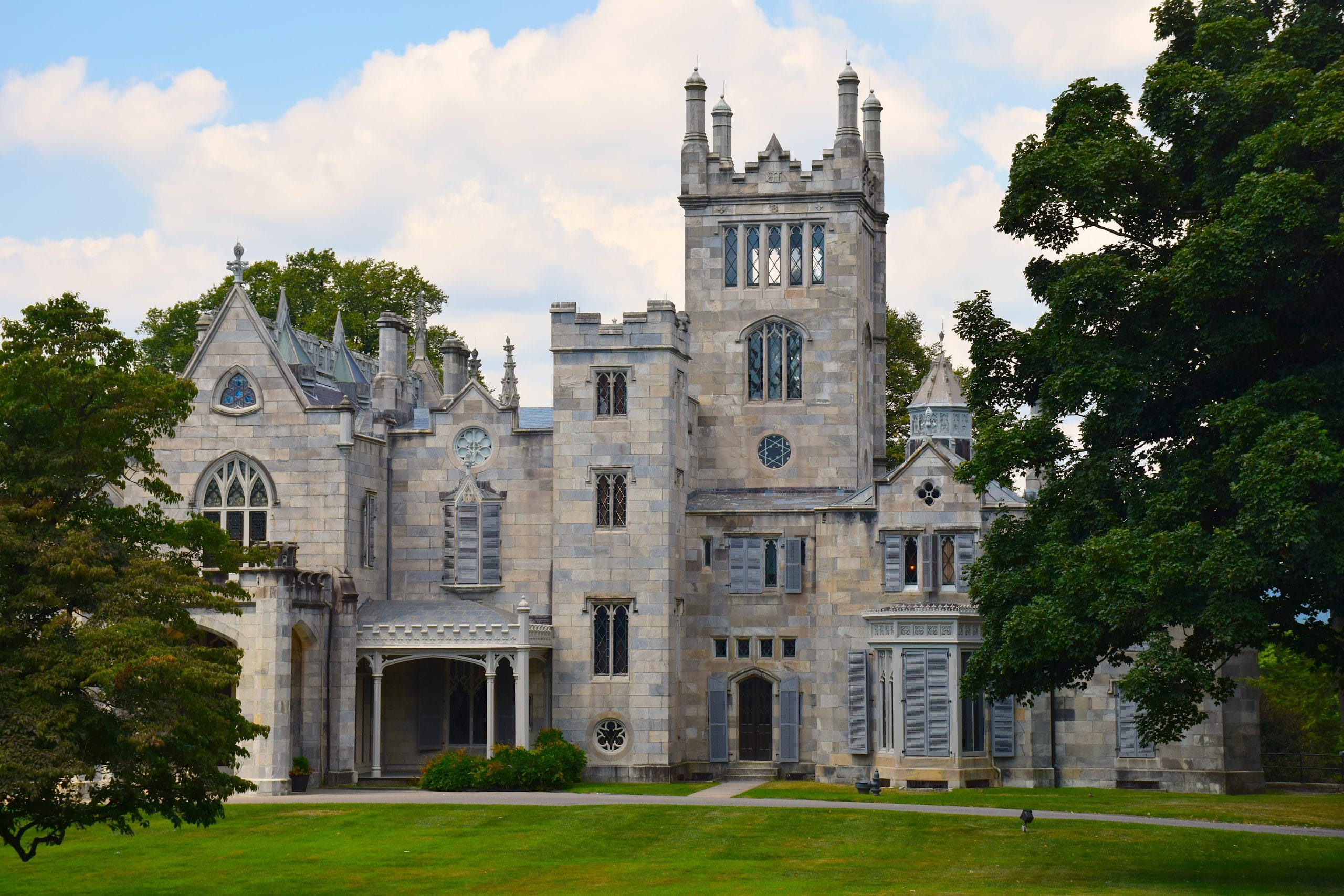 Despite it popularity with visitors, Tarrytown has remained charming.  You can enjoy meeting the locals when sitting at the sidewalk tables having a fabulous meal anytime at Horsefeathers, a favorite of the locals.  There are hotels in Tarrytown across the price spectrum.  The CTH favorite inn is the historic Tarrytown House. 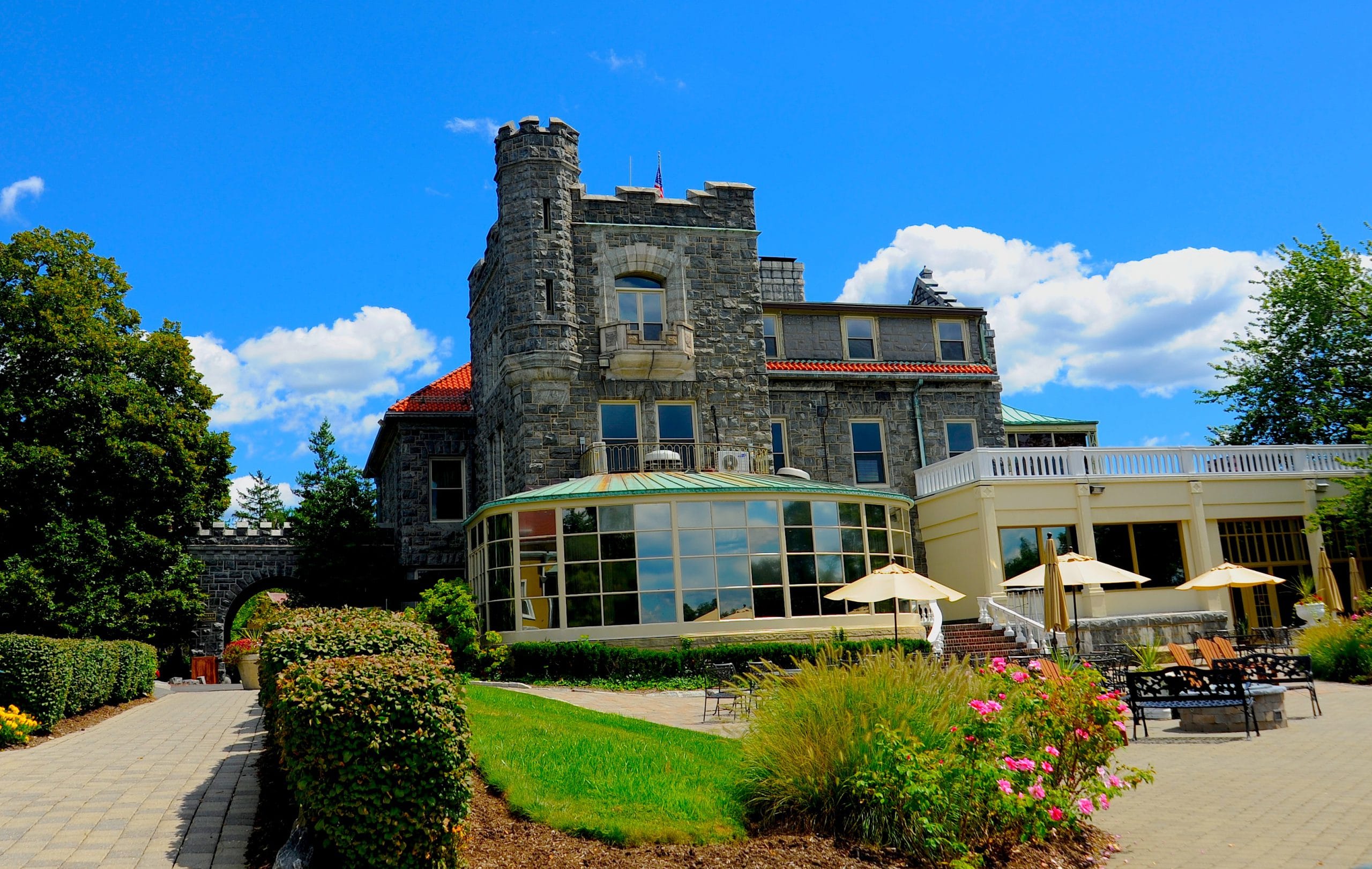 The Tarrytown House was built in 1840, by Thomas King vice-president of the B & O Railroad.  In 1895 the property was expanded.  From 1922 to 1960 it was the home of Duke tobacco heiress Mary Duke Biddle.  Guests can opt to stay in the original King house or the Biddle Mansion, with tall windows leading to balconies overlooking extensive gardens.  There are newer guest wings built from the 1930s to 2001.  Save at least one evening for dinner at Cellar 49 for a great wine selection, inventive menus incorporating local items, and service befitting a fine estate.

When the weather cools, and summer vacations have ended, extend the season of delights with a visit to Tarrytown and the Sleepy Hollow Cemetery.  Relive the moment by sitting on a balcony reading Irving’s stories.  The Dutch ghosts are still there among the pumpkins smiling at you.

General ticket information for all sites is available at hudsonvalley.org.