Valencia has long been a vacation destination for its miles of beautiful beaches and its predictable sunshine.  Cruise visitors may think of the port as merely somewhere to pass time between the better-known Barcelona and Seville.  The Valencia of today competes well with its popular national cohorts.  It may eclipse both in popularity for its less crowded historic old town, its succession of plazas, each with its own character, and the relatively new public spaces designed by its native son, Santiago Calatrava.  Old and new cohabitate nicely in Valencia. 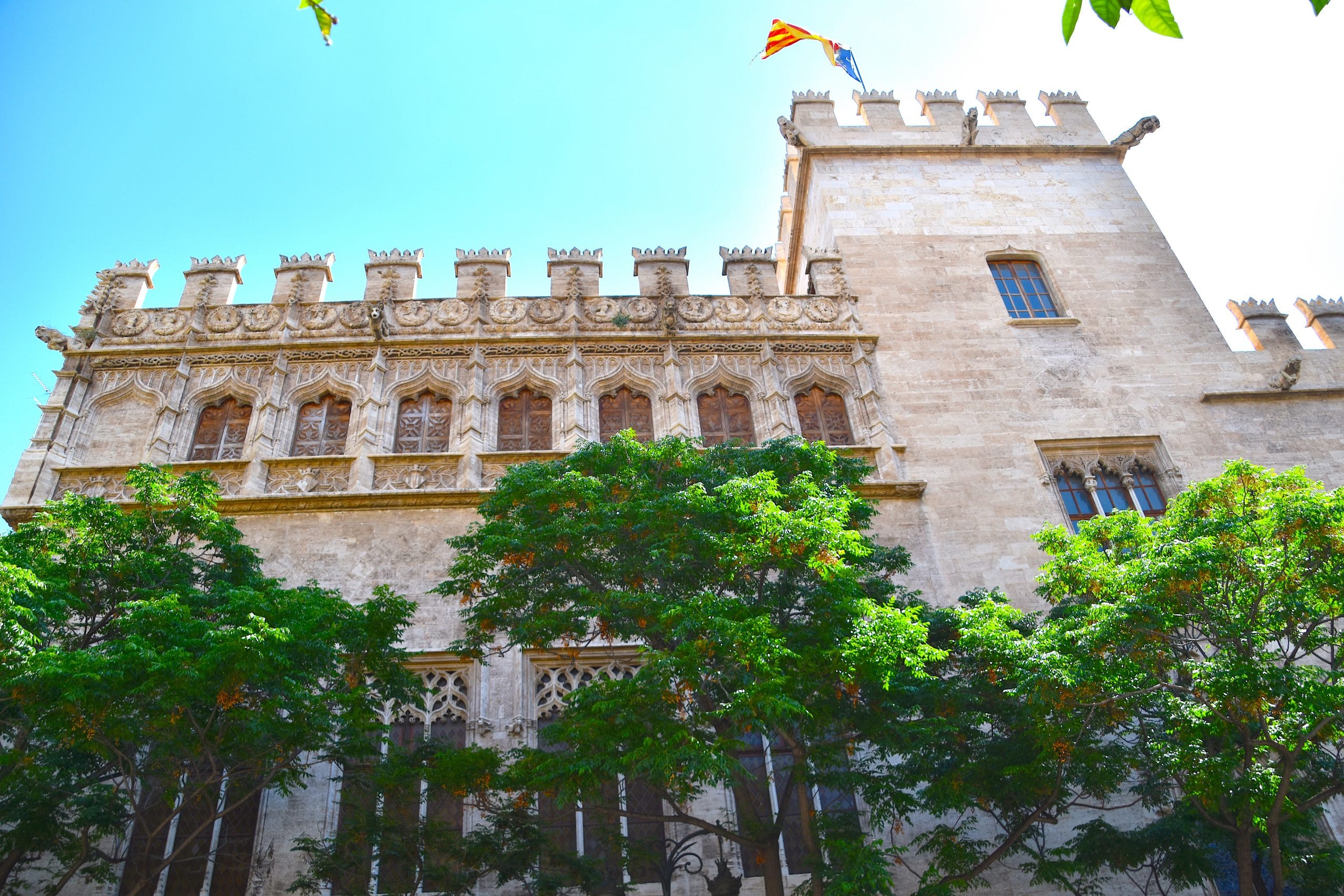 El Cid captured Valencia from its Muslim overlords in 1094.  The Muslims of the first millennium Spain were those who left a wealth of architectural beauties in Granada and Cordoba.  Little of their legacy remains in Valencia.  The city is best known for the 1961 epic movie, El Cid, starring Sophia Loren and Charleton Heston.  The remaining city walls and gates of the medieval era date to the 13th century.  The new Silk Exchange, one of the oldest buildings in the city, dates to the 15th century, when Valencia competed in commerce with Barcelona.

Greeks settled the area in 138 BCE.  Two hundred years later the Romans arrived.  The Roman archaeological site, immediately behind the cathedral, is preserved under glass, covered by a shallow fountain.  The effect is cool and restful. 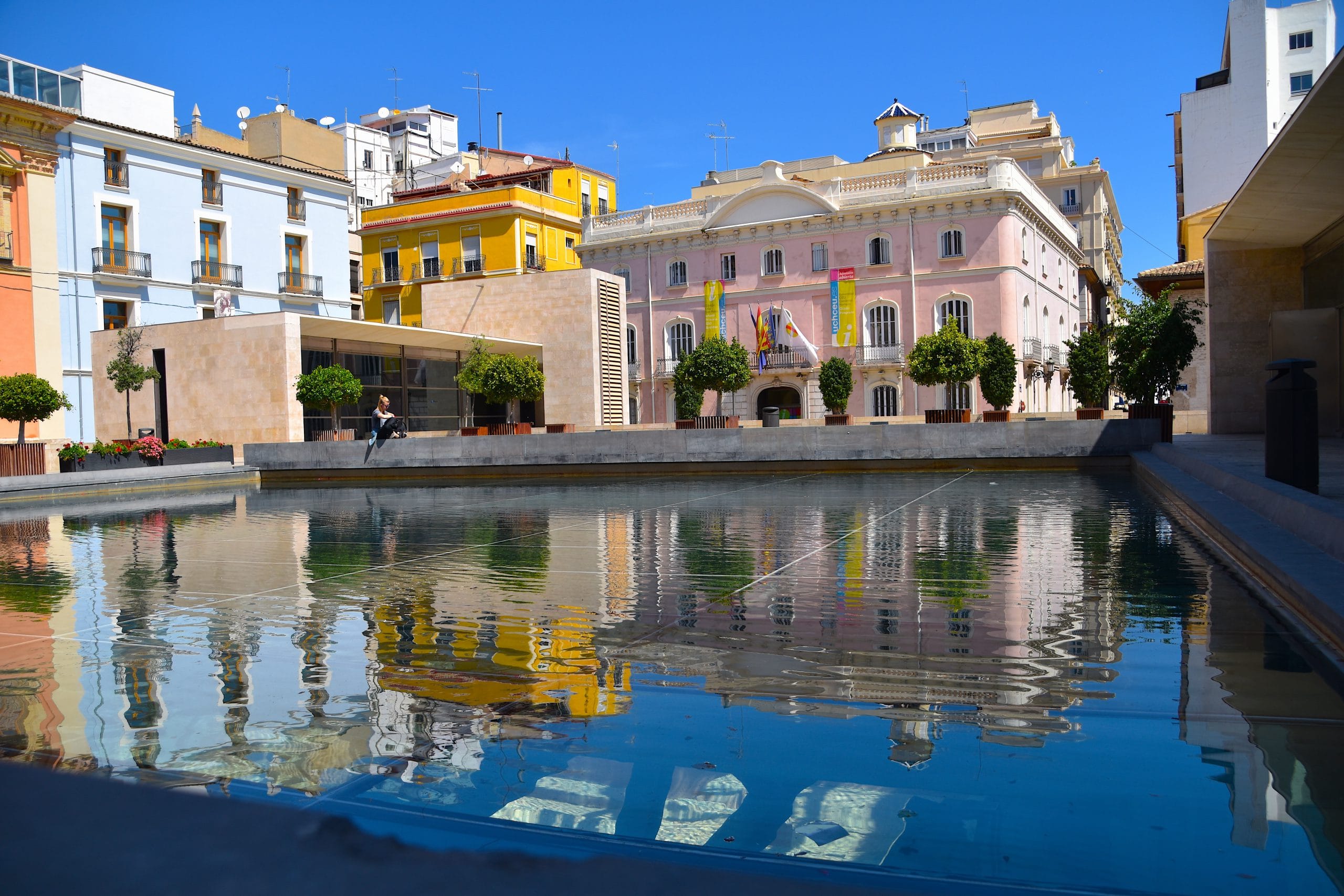 The cathedral, with its notable El Miguelete octagonal tower dominates the Plaza de la Reine.  Much of the structures are preserved from the 14th and 15th centuries.  Climb to the top of the tower to view the city, with the many blue-glazed domes of churches, hardly able to be seen when walking the narrow streets.  The plaza gardens are always in bloom.  The sidewalk cafes that ring the plaza are always filled with visitors.  Buses pass by only on the far side of the plaza.  To see the very old Valencia it is necessary to walk a few blocks.  Hop on and off buses do not work well in the old city.

Fortunately, for viewing the key buildings on foot, the Plaza de la Reine is not far from the Silk Market.  Across the street from the Silk Market is the lively present-day Mercado.  Built in 1928 of steel beams and stained glass, the building looks like a train station from the outside.  Inside find fresh fish and smoked ham.  The 1917 train station, on the outer ring of the city, looks like a stage set for a western. 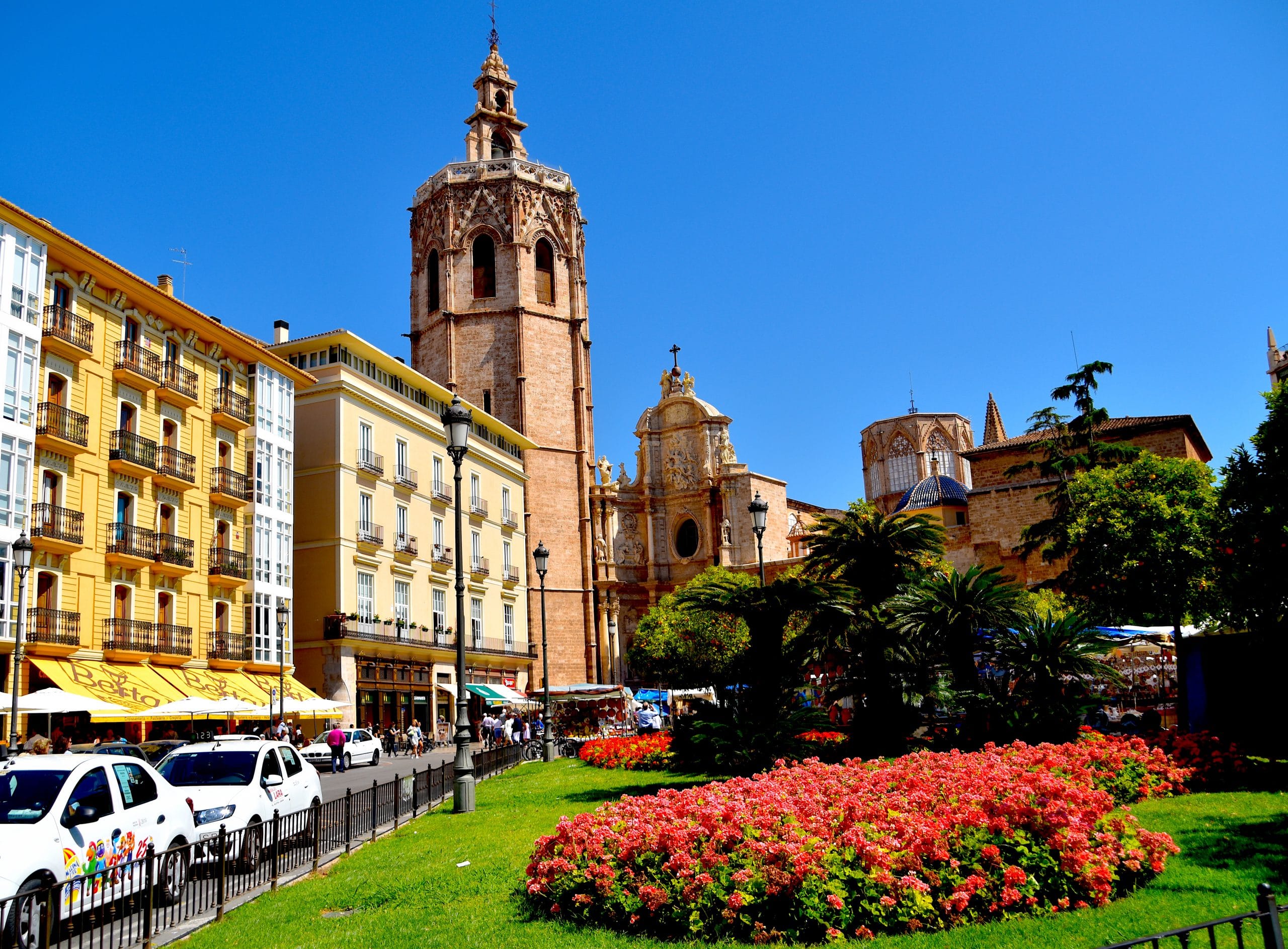 Between the train station and the core of the old city is the 19th and 2oth century Plaza del Ayuntamiento.  The town hall square surrounds a flower market and has hotels and office buildings all in whipped cream white.  One exception is the yellow Art Deco theatre.  The wide boulevards run past fountains and gardens.

Old city Valencia is notable for its cleanliness and absence of graffiti.  The spiffy appearance does not appear forced.  This is a living city; not a few blocks of a museum.  The churches are active parishes, even on weekdays.  The cafes are numerous, the prices inexpensive and the quality wonderful.  Locals appear to outnumber tourists.  When I popped into Guantes Camps to buy gloves, my favorite travel item, I was amid locals and was treated pleasantly like a local. 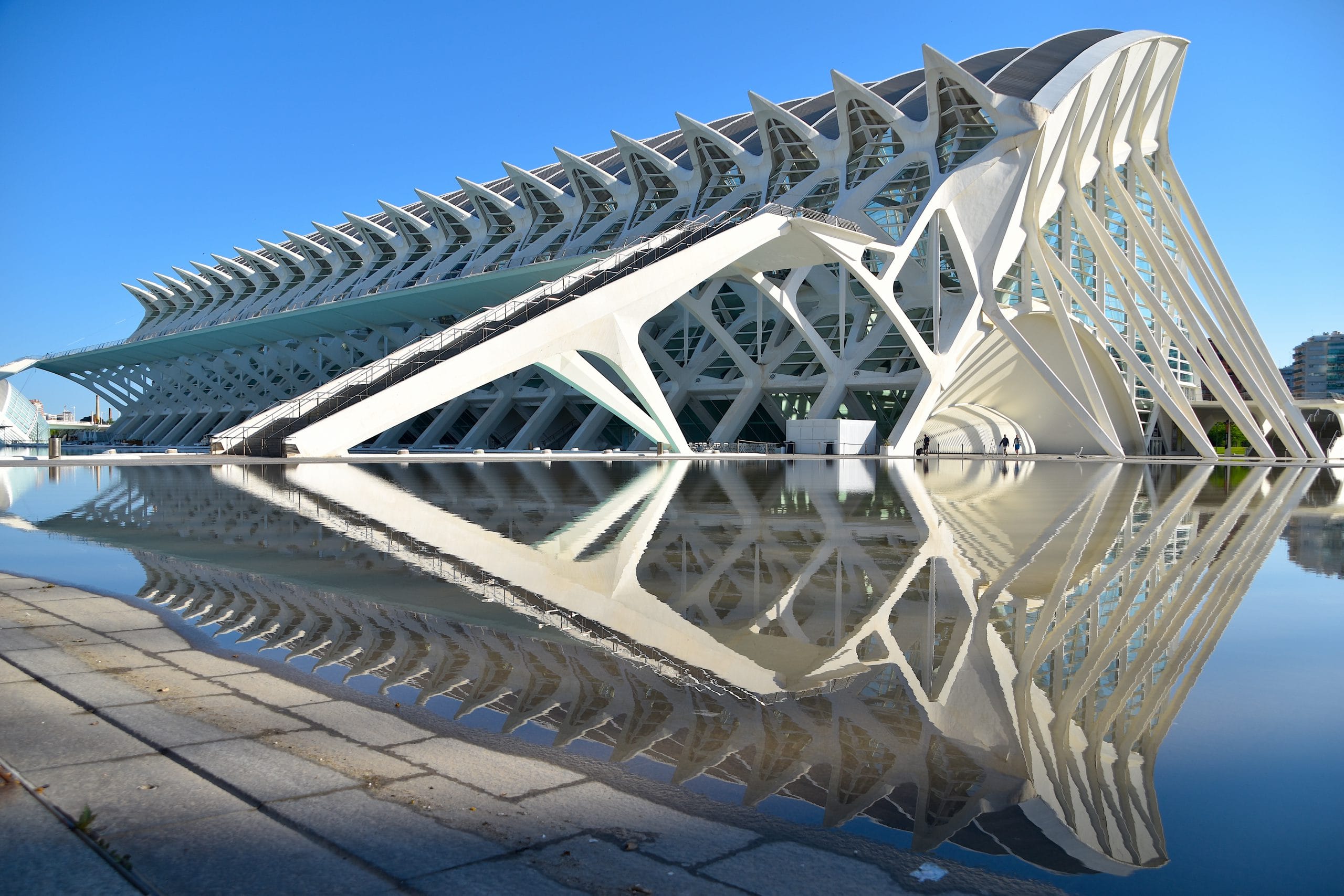 Beyond the old city, in an area of former fields and swamps, is the City of Arts and Sciences, completed in 2000.  It sits in a shallow lake, next to the Planetarium with its gigantic eye that is lit at night.  On opposite ends of the City are the Agora, display space, separated from the City by a feathery bridge, and the Opera House, completed in 2006.  Beyond the Agora is the large campus of the Aquarium complex.  Parallel to the City, above the lake, is a tropical shaded garden. 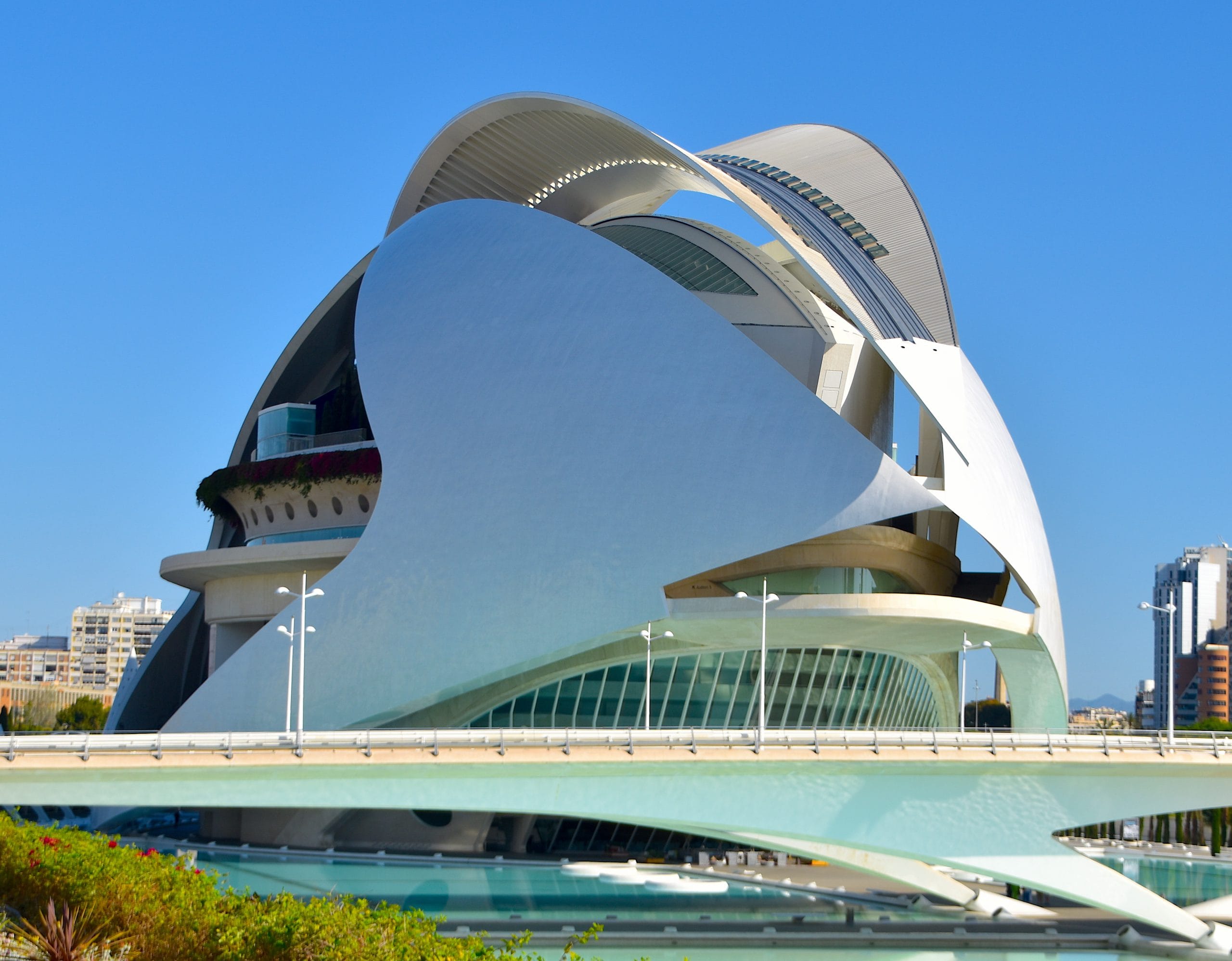 The entire City of Arts and Sciences, surrounding buildings and the bridge, have created the focal point for a 21st century Valencia.  They are amazing for the size of the undertaking and resulting reclamation of land into recreation spaces and stunning new apartment buildings.  The complex is notable for being the work of a single architect, now famous world-wide, and a native Valencian, Santiago Calatrava.  Fitting for a native son, the City is the largest group of Calatrava buildings anywhere in the world.  It’s worth a trip around the world to see them.

For more on Valencia and El Cid, see Cruise through History, Itinerary I, on sale at Amazon.com.